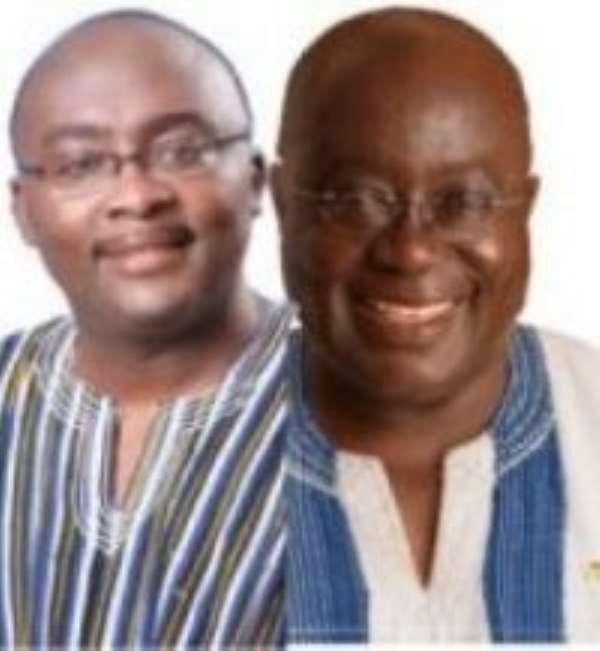 The chiefs and people of northern Ghana have declared their unwavering support for the New Patriotic Party presidential ticket of Nana Akufo-Addo and Mahamudu Bawumia, describing the ticket as the nation's hope for the future, in the face of the current leadership paralysis the nation has been plunged into under the Mills-Mahama led NDC administration.

The atmosphere in the north was electrifying at the weekend when the presidential ticket visited the place, where Dr Bawumia was officially unveiled by Nana Akufo-Addo as the NPP vice presidential candidate for the 2012 elections.

The presidential ticket addressed a number of durbars at various places, including Gambaga, Nalerigu, Kperiga and Mamprugu, where they were met by thousands of people.

The team also took part in a number of Muslim prayer sessions in various towns, the climax being the Thanksgiving Service held at the Jubilee Park in Tamale, to seek the face of Allah and to pray for peace before, during and after the December polls.

Moving to Mamprugu through Tamale, when they arrived early Friday morning, the duo was welcomed by thousands of enthusiastic fans and supporters, who lined up the streets and mobbed the presidential ticket at every stop, cheering up the team they hope will deliver the nation from “the governance of incompetence and despair.”

Addressing the various gatherings, Nana Akufo-Addo described Dr Bawumia as “a good partner in 2008', adding that the two were very compatible and worked extremely hard in the last campaign.

He also described his running mate as “an intelligent young man” who would help manage the country's economy, expressing the hope the people of northern Ghana would fully support the ticket to win the December polls.

The presence of the team in Nalerigu brought the historic town to a total standstill, as thousands of people led the team to the Nayiri's Palace where Dr Bawumia, presented himself to his 'father', the Nayiri, Na Bohagu Mahami Abdulai Sheriga, and officially sought his blessings and support for the task ahead him and the NPP in the upcoming elections.

Addressing the people, Nana Akufo-Addo said in 2008 he had to think deep about his choice of partner and that after much soul-searching and guidance from God, Dr Bawumia emerged as the best choice.

He mentioned again that when the time came for him to choose a running mate again, he had to make the same choice following deep thinking and guidance from God again and realized Dr Bawumia was the man he needed again.

He described Dr Bawumia as a brilliant economist, hardworking young man, someone with a proven track record, committed and loyal and someone who shared his vision of economic transformation for the nation.

He stressed that with Dr Bawumia by his side, the next NPP administration would see through fully its programme for the North which would ensure among others that Northern youths would be able to find decent and quality jobs in the North and build a good life for themselves.

Dr Bawumia thanked the Chiefs and people for the rousing welcome accorded him, Nana Akufo-Addo and the NPP team. He called on the people to throw their support fully behind the NPP presidential ticket, assuring that the team was coming into office with programmes and policies to make life better for the people of the North and Ghana generally.