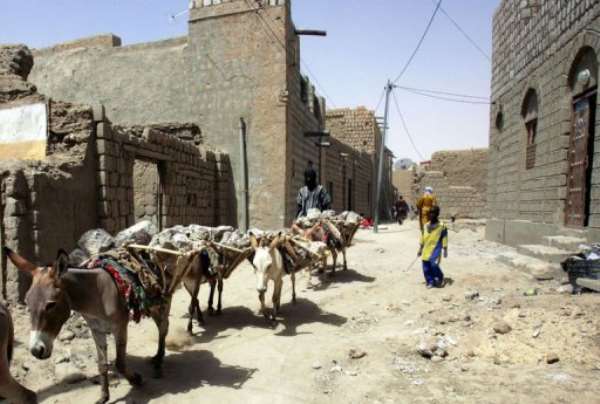 OUAGADOUGOU (AFP) - Mali's putschists and politicians called for talks with rebels holding the north of the country, as Islamists holding key towns there signaled they were ready to open a dialogue.

The announcement came as military officers behind last month's coup and the country's politicians haggled over the details of the return to democracy at talks in Ouagadougou, the capital of neighbouring Burkina Faso.

Ansar Dine, which is backed by Al-Qaeda in the Islamic Mahgreb and which wants sharia law imposed across Mali, said it is open to negotiations with Bamako but warned against western interference.

"We are available to talk about the future with Bamako," Oumar Ag Mohamed, a source close to the Islamist group's chief Iyad Ag Ghaly, told AFP.

"Between Muslim brothers, we can get along. But non-Muslims must not meddle in our problems," he warned.

Soon after, a joint statement from the officers behind last month's military coup in Mali and politicians urged the transitional authority overseeing the return to democracy to open talks with the rebels holding the north.

Mohamed's comments came after Malian envoy Tibile Drame said there was a "basis for dialogue" with the Islamist group that had seized the north along with Tuareg rebels, but which opposes their separatist ambitions.

Meanwhile, underlining the continued dangers on the ground in Mali, a Swiss woman was abducted Sunday in the rebel-held northern city of Timbuktu, now controlled by Islamist fighters, a local official told AFP.

Sources described 'Beatrice' as a Christian woman in her 40s, very active in the local community, who had lived for years in the city.

Impoverished Mali was plunged into crisis when a group of low-ranking army officers launched a coup that toppled president Amadou Toumani Toure on March 22.

Coup leaders justified their action by denouncing the government's ineffective resistance to a Tuareg rebellion which was rekindled in January.

But the rebels, together with Islamists, took advantage of the disarray in Bamako to seize the north, capturing an area roughly the size of France, including the ancient town of Timbuktu.

In Ouagadougou, West African bloc ECOWAS brokered talks on Sunday aimed at ending the crisis in the north, as well as charting the country's return to democracy. Burkina Faso President Blaise Compaore mediated the talks.

A new prime minister is expected to be named Monday or Tuesday, sources said, with the make-up of the government decided later in the week.

The sources close to the negotiations said three names were in the frame for the premier's job; Soumana Sacko, who served as interim-PM in 1991-92, Michel Sidibe, UN Under-Secretary-General and director of the UN AIDS programme and Dialla Konate, an academic working in the United States.

But the length of the transition period led by interim President Dioncounda Traore, who took office Thursday, was proving to be a key stumbling block.

Under the constitution, an interim presidency should only last 40 days, but a transition deal reached with ECOWAS mediators recognised it could take longer to organise new elections and return Mali to constitutional rule.

Supporters of the coup leaders want the putschists returned to power after Traore's 40-day interim.

But opponents of the coup want Traore, a former speaker of parliament, to lead a transitional administration of 12 to 15 months, followed by new presidential and legislative elections.

A statement late Sunday from the ex-junta leaders and the transitional authorities said they had agreed that neither side -- the soldiers nor members of the transitional administration -- should be allowed to run in the presidential election, once it had been organised.

Concerned about the situation in the north, some of the 80 participants meeting in Ouagadougou are seeking ECOWAS-led military intervention, should the talks fail.

Mauritanian President Mohamed Ould Abdel Aziz warned that if the international community failed to act quickly to stem the crisis in the country, "all the ingredients are there to turn Mali into an Afghanistan."

Aziz on Sunday also received Malian envoy Drame, who travelled to his country to seek the country's support to solve the crisis.

"Mali is counting on Mauritania, just as we are also counting on other neighbouring countries, to resolve major problems in the north of Mali," said Drame.