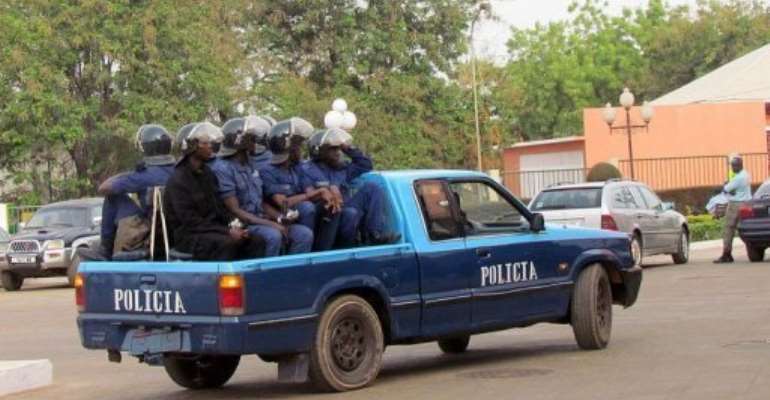 Police arrive at the National Assembly in Bissau. By Alfa Balde (AFP)

BISSAU (AFP) - Guinea-Bissau's opposition vowed on Sunday to quickly reach a power-sharing deal with the junta that seized power in the latest coup to shake the notoriously unstable west African country.

The two sides held talks for a third day on Sunday trying to hammer out a deal following Thursday's putsch that came in the middle of a presidential campaign, derailing the second round.

"In any case there will be a solution before the arrival Monday of the ECOWAS delegation" that is due to mediate the conflict, said Fernando Vaz, a spokesman for around a dozen opposition parties who have held talks with the junta that overthrew the government last week.

"We have two proposals to present to the military. One is constitutional, and the other is for a radical change," Vaz said ahead of the talks, without elaborting.

Soldiers violently dispersed some 30 people who tried to hold a peaceful demonstration in front of the national assembly, where the negotiations were taking place, according to an AFP journalist on the scene.

On Friday the new self-styled military command under the army vice chief of staff, Mamadu Ture Kuruma, offered parties a role in a "unity government" in which the junta would keep the defence and interior portfolios.

The new regime would exclude the toppled African Party for the Independence of Guinea-Bissau and Cape Verde (PAIGC), which has led the country for almost 10 years.

The coup, in which troops detained Prime Minister Carlos Gomes Junior, the election frontrunner, has been condemned by the United Nations, the African Union as well as the United States, the European Union and former colonial ruler Portugal.

Concern was mounting at the weekend for the well-being of Gomes and of President Raimundo Pereira who the junta says were captured in the power grab Thursday night, and for other members of the toppled government in the coup-prone nation.

In Lisbon on Saturday, the Community of Portuguese Speaking Countries (CPLP) issued a strongly worded condemnation of the coup in the former Portuguese colony and called for UN-backed military intervention, without suggesting possible contributers.

The coup leaders announced Saturday that they had reached an agreement with Angola, another former Portuguese colony, on the departure of its troops stationed in Bissau and a member of Angola's force confirmed to AFP that the soldiers were waiting for transport home.

The deposed government had been pushing for military reforms, and the junta justified its coup by claiming there had been a "secret deal" with Angola to undermine the army.

Angola had in any case announced the departure of the force last Monday, a few days before the coup.

The European Union warned Saturday that it was reviewing all remaining aid to Guinea-Bissau. It called on the junta to free prisoners and re-establish the legitimate government.

The coup has already been condemned by the United Nations and the African Union as well as the United States, the European Union and Portugal.

The new junta says it is holding Prime Minister Carlos Gomes Junior, who had been the favourite to win the second round of the presidential election, as well as President Raimundo Pereira and other members of the government.

Gomes had garnered 49 percent of the vote in the first round on March 18, and campaigning for the second round had been due to start Friday.

Opposition candidates, including ex-president Kumba Yala who would have faced Gomes in the second round, had alleged fraud in the first round and said they would boycott the runoff.

The leaders of Thursday's coup include the army, navy and air force chiefs. They announced Friday they had also deposed the army chief-of-staff, General Antonio Indjai.

But from Lisbon, Pires dismissed that last claim as "a farce" saying Indjai had been behind the coup.

Since independence in 1974, Guinea-Bissau's army and state have remained in constant conflict, and no president has ever completed a full term in office. Three have been overthrown and one was assassinated.