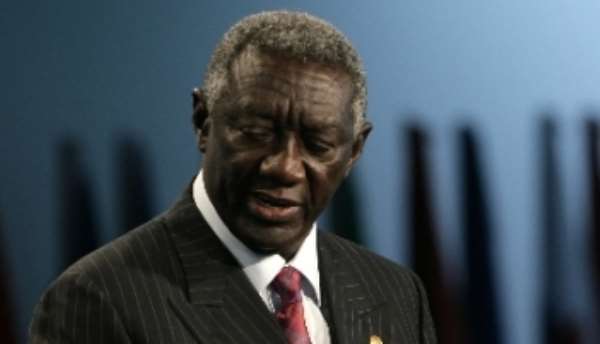 Accra, April 14, GNA - Former President John Agyekum Kufuor, on Saturday left Accra to Washington DC in the United State of America, to attend meetings with Sanitation and Water for All Partnership (SWA) and Global Network for Neglected Tropical Diseases (NTDs).

The statement said former President Kufuor would also be a Special Envoy for Global Network for NTDs, and the meetings would be attended by about 50 Ministers of Finance and Economic Planning as well as Ministers responsible for water and sanitation across the globe.

It said former President Kufuor, who would be away for 10 days, was expected to use the occasion to appeal to Governments to prioritize water and sanitation as well as increase funding to the sector, to help achieve the Millennium Development Goals set for the sector by 2015.

The statement said: “Former President Kufuor will draw a link between good sanitation, water and hygiene to health, economic development and gender equity, and call for the doubling of efforts to help the world's poor gain access to more decent sources of water and sanitation.”

The statement said the SWA was aimed to overcome the serious gap in progress in delivering sanitation and water to the world's poor.

It said the former President would be outdoored as the new Special Envoy of NTDs at a lunch for diplomats at the Carton Ritz Hotel, where he would seek for greater collaboration among world leaders to help fight neglected diseases in developing countries.

The statement said: “He will hold side meetings with Dr Ariel Pablos-Mendez, Assistant Administrator for Global Health at the US Agency for International Development, and Dr Jimmy Kolker, Deputy Director of Global Affairs at the US Department of Health and Human Services.”

It said the Global Network was aimed at raising public awareness of the seven most common NTDs and the funding necessary to eliminate them as global threats by 2020.

“NTDs cause blindness, massive swellings in appendages and limbs, severe malnutrition and anemia are transmitted by worms in the soil, water bodies or insect bites and yet are not the focus of attention in world forums.”