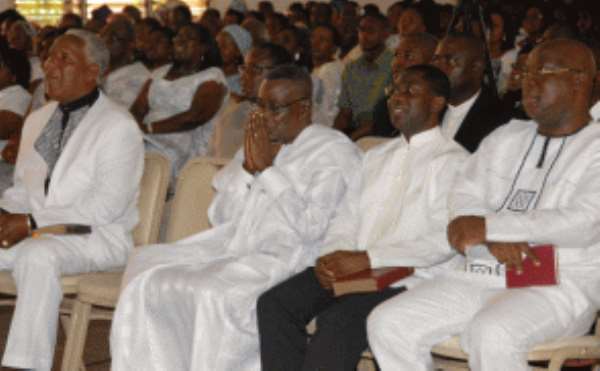 The President, Prof. John Evans Atta Mills, has underscored the need for Ghanaians to maintain the stability of the nation and refrain from acts that will disrupt the national peace.

He referred to the recent political situation in Mali with its negative consequences, and cautioned that under no circumstance should the stability of Ghana be taken for granted.

President Mills made the call when he joined a large congregation at the Legon Interdenominational Church (LIC), to celebrate the resurrection of the Lord Jesus Christ.

The President, who worshipped with the congregation on December 31 night in 2011, described his visit as a homecoming and thanked the congregation for the warm reception accorded him and his entourage.

“This is a home for me,“ President Mills said, adding “this is where it all started,” in an apparent reference to the birth of his spiritual strength on the road to becoming president.

He said it was an opportunity for him to be at the church once again and acknowledged the spiritual support from the religious community in the governance process.

President Mills stressed the need for more prayers coupled with determination to execute all tasks required for the success of the nation.

In a sermon on the theme: “Experiencing the Power of the Resurrection”, Rev Yaw Boamah, the Resident Pastor of the church, said the resurrection of Christ made futile the power of death and empowered believers to do great works.

Describing the resurrection as the most important event in human history, Rev Boamah said the event redefined history, and placed truth on mankind with the capacity to change the human experience.

“Without the resurrection, there will be no Christianity,” Rev Boamah said, adding that the day of Jesus’ death, Good Friday, was a day of humiliation for Christ and his followers, but Holy Sunday, the day he rose gave proof to the backing he had from God.

“To God be the glory, Christ has risen,” Rev Boamah, declared.

He urged Ghanaians to be empowered by the power of the resurrection and underscored the need for action backed prayers, explaining that where there was charisma without character, there would be chaos.

Rev Boamah said the resurrection gave power to the weak and urged the congregation to tap into that power by banishing fear, and experience a victorious living.

Reason why Kwame Nkrumah's children were prevented from seei...
30 minutes ago