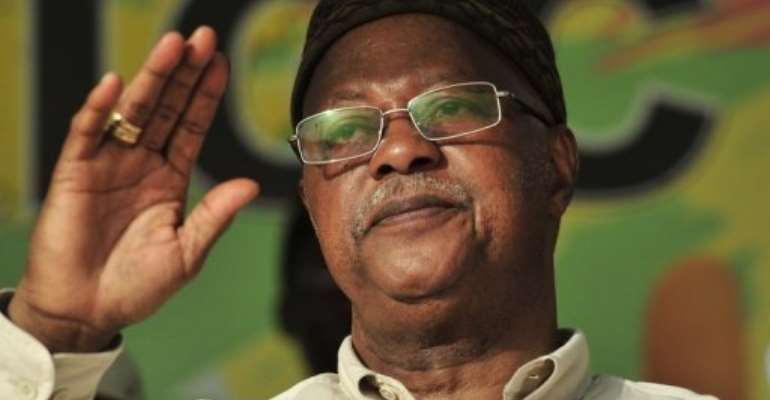 BISSAU (AFP) - Guinea-Bissau soldiers were in control of the capital of the coup-prone nation Friday and holding both the prime minister and interim president, as the world condemned their power grab.

Prime Minister Carlos Gomes Junior -- the favourite in a second-round presidential election set for this month -- was seized in a military assault on his home using rocket-propelled grenades the previous evening.

Interim president Raimundo Pereira was also being held, while heavily armed soldiers patrolled Bissau on the day after their coup, in which they seized ruling party headquarters and the state radio station.

Soldiers also clustered at the finance and justice ministries and the headquarters of the ruling African Party for the Independence of Guinea-Bissau and Cape Verde (PAIGC).

A shadowy "military command" insisted in a statement it was not interested in power and said it had acted because of an alleged "secret deal" with Angola, which has 200 troops in the country to help reform the military.

The UN Security Council on Friday "condemned the military action and urged the immediate restoration of civilian authority", US ambassador to the United Nations Susan Rice said after council talks.

Violence had been feared for days in the former Portuguese colony, which has seen half a dozen coups or attempted coups since 1980 and has become a hub for drug-running between South America and Europe.

Gomes had garnered 49 percent of the vote in the first round election on March 18, and campaigning for the second round was supposed to start Friday.

The opposition -- led by second-placed Kumba Yala, a former president who claims the first round was rigged -- has called for a boycott of the run-off, which had been postponed on Wednesday from April 22 to 29.

On Thursday evening, soldiers armed with rocket-propelled grenades and Kalashnikov rifles launched their power grab, and gunfire and ambulance sirens echoed through a city plunged into darkness as electricity was cut off.

A rocket strike gutted the living room of Gomes' residence, and his wife Salome told AFP that soldiers whisked the premier away in a pickup truck.

A military source said the arrested leaders were taken to army headquarters at San Vincente, 45 kilometres (28 miles) north of the capital.

The soldiers' leadership, and their intentions, remained unclear by Friday afternoon following their actions which claimed no known casualties in the impoverished country of 1.6 million people.

"The military command has no ambition for power," it said in a statement, alleging instead that it acted because the government was bent on "eliminating the army with a foreign military force."

The army later called for a meeting of political parties at 1700 GMT Friday with the aim of resolving the crisis "which has created fear and chaos."

It reaffirmed its intention "to maintain its distance from the democratically instituted civil power."

The Angolan troop presence has been a bone of contention between the government and army amid suspicions that it was being secretly built up.

Former colonial power Portugal on Thursday condemned the coup and rejected suggestions that the Angolan deployment was suspicious.

"This mission is a factor of security, not a factor of instability," said Foreign Minister Paulo Portas, adding that it was "important for (Guinea-Bissau) to have an international security presence."

The US embassy in Senegal said: "It is regrettable that elements of the Bissau-Guinean military have chosen to derail the democratic process."

The African Union's commission chief Jean Ping condemned the "outrageous acts which undermine the efforts to stabilise the situation in Guinea-Bissau and tarnish the image of the country and Africa."

West African regional group ECOWAS, which has been grappling with a putsch and rebellion in nearby Mali, "rigorously condemned" the coup.

Nigerian President Goodluck Jonathan said he and the government "totally condemn and reject the ongoing attempt by a segment of the military in Guinea-Bissau to subvert the country's constitutional order".

The first round vote was also tainted by the assassination of former military intelligence chief Colonel Samba Diallo. He had been accused of involvement in a 2009 bombing that killed the then army chief and prompted the murder of president Joao Bernardo Vieira in a revenge attack.

Since independence in 1974, Guinea-Bissau's army and state have remained in constant, often deadly, conflict, and no president has ever completed a full term in office. Three have been overthrown and one was assassinated in office.

The latest election was held after the last president, Malam Bacai Sanha, died in January following a long illness.