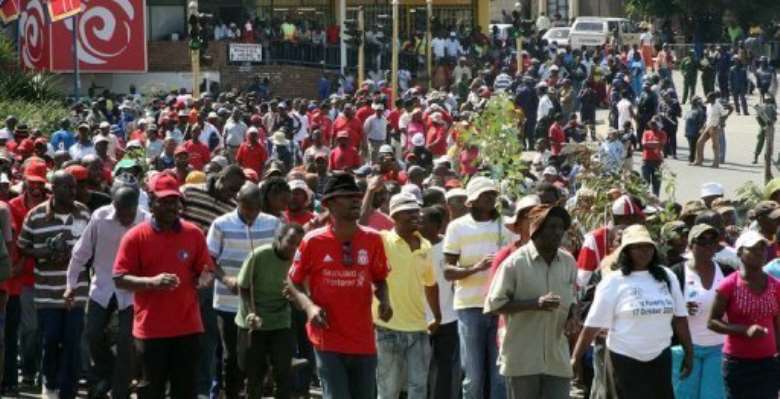 Pro-democracy protesters in Mbabane in 2011. By Jinty Jackson (AFP/File)

MBABANE (AFP) - The government of Swaziland Wednesday issued a strong warning against pro-democracy demonstrations planned for Thursday, saying any flouting of an order banning the protests would not be tolerated.

"We shall deal with all those who will want to defy the law. The Industrial Court stopped any form of protests and we therefore do not expect any protest," government spokesman Percy Simelane said.

Africa's last absolute monarchy on Tuesday obtained a last-minute court order blocking the planned demonstrations organised by student and labour activists, but the groups have vowed to push ahead despite the ban.

The demonstrations are meant to commemorate a ban on political parties and the suspension of the constitution that have allowed the king to rule by decree since 1973.

"We can promise them now that those who will attempt to defy this ruling will be dealt with harshly," Simelane told journalists.

People will not be allowed to walk in groups of three or more, he said.

Anti-government protests have mushroomed over the past year amid deepening frustration among impoverished Swazis over a crippling financial crisis under the reign of King Mswati III.

Labour activists and students are angered by a financial crisis that saw the closing of schools and moves to slash salaries.

"Nothing has changed, we are going ahead with tomorrow's (Thursday's) protests," said Vincent Dlamini, secretary general of the National Public Service and Allied Workers Union (NAPSAWU).

"Of course we anticipate that the police will use their underhand tactics, but we won't back down."

Police arrested two activists and set up roadblocks across the capital Mbabane and commercial hub Manzini in anticipation of the demonstrations.

"We see this as an intimidating tactic meant to frustrate and destabilise tomorrow's protests," Dlamini said.

"We have already mobilised our members to ensure that they attend in their numbers. We are however, aware that government will try to suppress the protest, hence we expect our members to be vigilant and outwit the enemy," the leader of the Swaziland National Union of Students, Maxwell Dlamini, told journalists.

Since then, more than 60 protests have rattled the country, many of them small, but nonetheless marking a change in a kingdom that tolerates little dissent.

Demands for reform are expected to increase as Swaziland heads for legislative elections next year. Normally the votes are an orchestrated show of support for the king.

No parties are allowed to contest the polls, candidates are vetted by local leaders, and afterward Mswati appoints the prime minister and cabinet.

Protesters in this vote want the king to allow political parties.

On the economic front, they have demanded the government scrap a new 14-percent value added tax imposed last week.

Despite declining customs receipts, the International Monetary Fund says, the government has overspent on defence, travel and projects such as a new airport, while struggling to pay civil servants and keep schools and clinics open.