Pakistan in a Catch-22 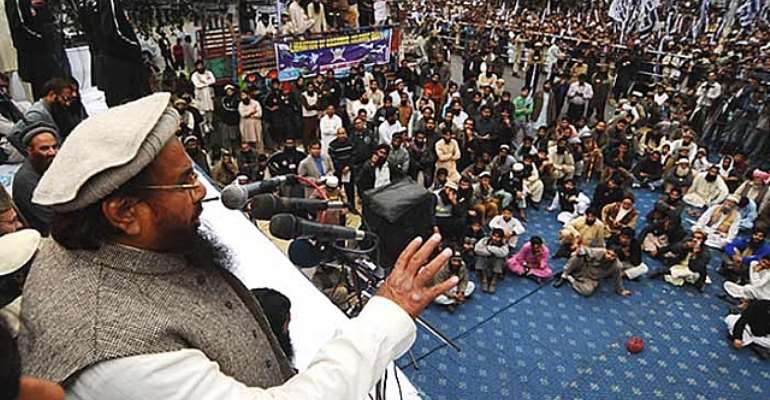 The killing of Osama Bin Laden in a raid by the US Navy SEALs in Abbottabad, near Islamabad did not only widen the rift between the US & Pakistan, but also exposed the true nature of Pakistan's state policy vis-à-vis terrorism. Pakistan has almost lost its credibility as a nation, as on one side, it is apparently standing behind the US in its 'War on Terror' campaign and getting billions of dollars in aid for 'combating terrorism', while on the other end, it is using that aid money to nurture terrorist organizations like Lashkar-e-Taiba, Tehrik-e-Taliban Pakistan et cetera and their masterminds. Even after the killing of Osama, hundreds of dreaded terrorists and most wanted international criminals are hiding in their safe havens in Pakistan. The extent of protection provided by the state of Pakistan to these terrorists was well exposed by the statements of one of Osama's wives, who admitted that Osama was living with protection in Pakistan for years.

The nose-diving of the relations between the US and Pakistan after Abbottabad operation is evident enough a proof that Islamabad couldn't convince Washington that it was unaware of the presence of Osama on Pakistani soil. It can be said that Pakistan's Army, government and the policies of its rulers were entirely responsible for this series of events. Instead of accepting its responsibility, Pakistan blamed the US for “violating its sovereignty”. No doubt, any such act by the US or any other country should be treated as a violation of sovereignty. But when it's about the 'War on Terror' and a target like Osama Bin Laden, the excuse of sovereignty just doesn't hold water. Even after an year of Operation Geronimo, Pakistan has not been able to win over the world on how Osama was living freely in Pakistan, elusive from the eagle eyes of its Army and the ISI.

Now, Pakistan is faced with a déjà vu situation. America has slapped a $ 10 million bounty on the head of another notorious terrorist Hafiz Saeed, who is known for spewing venom and hatred against the US and India. Similar amount of money has been announced for providing information leading to arrest of his brother-in-law Abdul Rahman Makki. Along with these two, many of their 'colleague' terrorists are also in that list. After this announcement by the US, both the Pakistan government and Hafiz Saeed are speaking the same language. Both are calling this step wrong, illegal and baseless. They say that Washington doesn't have any evidence regarding Saeed's involvement in any terrorist activity. While defending himself from this “American propaganda”, Hafiz Saeed calls himself a great “social worker.” He claims to operate many schools, madrasas and hospitals across Pakistan.

Even assuming that Hafiz Saeed has not been physically involved in any terrorist activity, his crime of provoking and misleading common Pakistanis against India, America and non-Muslims is no less severe. The lone terrorist caught alive in 26/11 Mumbai terror attack Ajmal Amir Kasab has admitted that he had been taught, nurtured and groomed by none other than Hafiz Saeed. Saeed has been heard a number of times saying, “When the US couldn't fight us in Afghanistan, India stands nowhere.” It's strange that the government of Pakistan is refusing to act against such a despicable person. Recently, when Pakistan decided to grant the Most Favoured Nation (MFN) status to India under the World Trade Organisation (WTO) clause, Hafiz Saeed opposed this decision tooth and nail and organized huge rallies in many cities of Pakistan against this peacemaking step with India.

Lately, a new umbrella organization named Difa-e-Pakistan Council, encompassing most of the terrorist organizations, has been formed. The chief of this organisation is Hafiz Saeed himself. To make people understand, its name has been kept 'Difa-e-Pakistan' i.e. 'to protect Pakistan.' But the reality is completely different. All these terrorist organizations want to takeover the control of Pakistan and its nuclear weapons. There are two factors driving this thinking. Firstly, they don't want the Afghan Taliban, Tehrik-e-Taliban and Al Qaeda to do this before them. Therefore, all Pakistan-based terrorist organizations have come together so as to resist any interference from any 'outsider' terrorist group. Secondly, by capturing Pakistani nukes, they want to deter the US and India so that they can't think of indulging into any adventure against Pakistan. The mastermind behind Difa-e-Pakistan and the thinking underpinning this organization is none other than that of the most wanted terrorist Hafiz Saeed!

Talking about Hafiz Saeed being a threat to Islam, it is just because of provocative and hateful speeches and sermons of such godmen that unemployed Muslim youth get attracted towards terrorism. They become suicide bombers either for money or for the sake of 'heaven'. When such mislead youth execute such a heinous act of terror in any part of the world, they put another stain on the peaceful religion of Islam as well as the Muslim community. When the terrorist masterminds like Hafiz Saeed are faced with their end, they start calling it a “conspiracy of the West against Islam.” Osama used to do the same. Before being apprehended by the American forces, Saddam followed the similar tone.

It's necessary to carefully listen to each & every word of people like Hafiz Saeed and understand the objectives behind what they say. Besides, Pakistani establishment should also brood over the fact that the terrorist whom it is inadvertently favouring in the name of 'sovereignty', is a terrorist in the cloak of a godman, and is no less dangerous than Osama. If Islamabad doesn't change its stance, it would have to face the repeat of Abbottabad & Pakistan will again get notoriety as a 'terrorist state.'