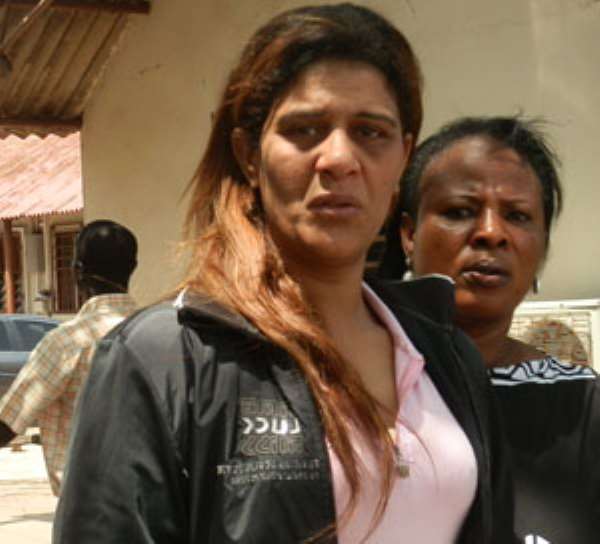 A 37-YEAR-old Moroccan woman arrested at the Kotoka International Airport (KIA) by Narcotics Control Board officials for allegedly importing narcotic drugs into the country has appeared before an Accra Circuit court.

However, the case was adjourned to today for a French interpreter to assist the court since the accused person could not express herself well in the English language.

Fatima Elouardi, yesterday, at the court presided over by Miss Audrey Kocuvie-Tay, could not hide her tears when the prosecutor, Principal State Attorney Asiamah Sampong, informed the judge that he was in court for a warrant to remand the accused person while investigations continued.

The prosecutor indicated to the court that the accused had been charged with two provisional counts of importation and possession of narcotic drugs but her plea would not be taken.

The judge, who disagreed with the prosecution for deciding not to take the plea of the accused, indicated that there was nothing like a provisional charge. She asked the prosecutor to charge her properly since the state, at any point in time, could substitute the charge sheet.

The judge informed the prosecutor that she would remand the accused for six days but Mr. Sampong explained to the judge that six days would not be enough since the substance had been forwarded to the Ghana Standards Board for analytical examination and the result was not ready.

The accused person informed the judge that she would like to speak French.

The judge then stood the case down for some minutes and ordered that a French interpreter be brought but because the person was not available, the case was subsequently adjourned to today.

Earlier, the accused, in tears, tried to explain to the judge that she knew nothing about the drugs found in her bag. According to her, although the bag in which the alleged narcotic drugs were concealed belonged to her, she did not know how the drugs got into it.

Fatima Elouardi was reportedly travelling from Sao Paulo, Brazil, via Dubai on Emirates Airlines, when she was arrested with 2.7 kilogrammes of cocaine, shortly on arrival at KIA on April 5, 2012.

The street value of the cocaine is $1million.
Her accomplice, one Youssef Salloum, is at large. Meanwhile, efforts are being made to get him arrested.

Fatima's arrest was a collaboration between NACOB and its international partners which had been monitoring the movement of the accused and her accomplices for some time.

Fatima, noted for allegedly flying in and out of Ghana for some time now, was said to have first travelled from Morocco to Accra on March 19, 2012 and was allegedly met on arrival by Youssef, who checked her into the Golden Tulip Hotel.

The following day, Youssef bought an Emirates Airline ticket for her and took her to the Kotoka International Airport to travel to Sao Paulo.

In Sao Paulo, Fatima was believed to have met her alleged supplier, Kamil Jawahiri alias Salim, a Lebanese, who used to live in Ghana but has relocated to Brazil.

After meeting with the suspected suppliers, Fatima was said to have left Sao Paulo for Accra on Thursday, April 5, 2012.

On arrival, she went through arrival formalities but walked out of the airport without claiming her luggage.

According to reports, she rather called Youssef, her accomplice, on phone to inform him that she had arrived safely.

NACOB and its international partners, who were monitoring her movement, arrested her while she was waiting to be picked up. She was then sent to the Arrival Hall to claim her luggage.

After Fatima had finally picked her luggage and it was opened, the drugs were found concealed under the bag.

Upon interrogation, the suspect broke down and allegedly admitted to the offence.