Dismiss me if you're a man 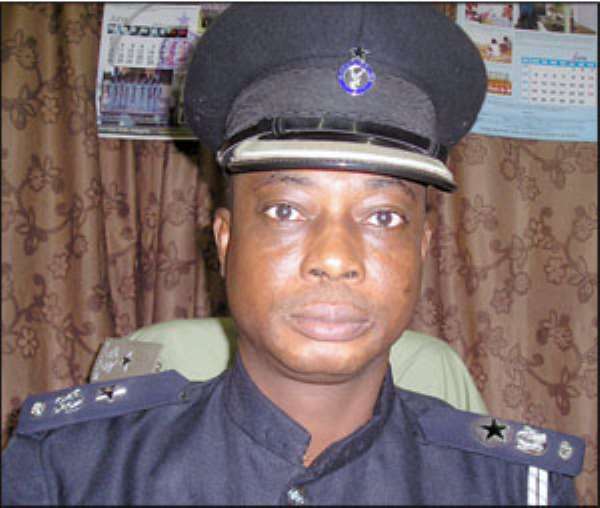 ACP Angwubutoge Awuni, Commander of the Motor Traffic and Transport Unit of the Ghana Police Service, has cautioned Ghanaians, especially those who occupy “certain positions” to conduct their activities within the ambit of the law to ensure effective maintenance of peace and order ahead of the December polls.

He has also reminded his colleague police officers that their loyalty is to the state and not any political party, urging them to always be on the side of the law and not personalities.

The warning comes in the wake of alleged plot by the ruling NDC, led by former Greater Accra regional minister, Nii Armah Ashietey, to “teach him a lesson” as a result of his firm resolve not to compromise his professional integrity in furtherance of the parochial agenda of the NDC to manipulate the ongoing biometric voters registration to its electoral advantage.

The no-nonsense police officer Thursday did what many of his colleagues ordinarily would not have the courage to do under the Mills-Mahama led NDC administration by ordering his men to apprehend the former Greater Accra regional minister for preventing potential voters from registering in the ongoing registration exercise.

Even though a similar situation still prevails in the Odododiodio constituency, where Presidential Aide and NDC parliamentary candidate, Nii Lantey Vanderpuije, has been disrupting the ongoing biometric voter registration exercise, and preventing Akans from registering, the police have failed to take any action.

While some of his colleagues face accusation of compromising their professional integrity, and being in cahoots with the ruling NDC, ACP Awuni has served notice of his intention to make sure no one takes the law into his own hands in his area of jurisdiction.

In a brute show of power, Nii Armah Ashietey was said to have threatened to get ACP Awuni dismissed for preventing him from hindering the registering process in the Klottey Korley Constituency where is the Member of Parliament.

“He made mention that he would make sure that I am dismissed from the Police Service and so when they [the policemen] brought him in [to the charge office], I gave him my [police] cap. In fact, I was furious; I gave him my cap that if he is a man he should dismiss me. I was doing my job; he did not employ me.”

The dismissed Greater Accra Regional Minister was said to be physically preventing some potential voters from registering on the suspicion they had come from the Odododiodoo constituency, which shares a boundary with the Klottey Korley constituency.

According to ACP Awuni, he asked Nii Ashietey to leave the scene because his attempts to stop others from registering were unlawful. But the MP refused, thus compelling the no-nonsense senior police officer to order his men to force the former minister out of the place.

He rebutted claims by Nii Ashietey that his men brutalized him, insisting only minimal force was applied when the former minister resisted arrest.

He said a provisional charge of disrupting the electoral process had been proffered against the NDC kingpin, adding that the case had been handed over to the Police CID office in Accra.

Meanwhile, the former minister yesterday told Joy FM he felt insulted and humiliated by the way he was treated, insisting that he would not allow the matter to rest, but would go every length to ensure that the senior police officer was dealt with.

“I have been a minister for three years and three months, and I don't think I deserve this kind of treatment,” he boasted.

He disclosed that he was writing a report to the National Security and the Ministry of Interior for investigations to be conducted into the case to unravel the truth or otherwise of the claims made against him.