Morrocan woman arrested with 2.7kg of cocaine at KIA 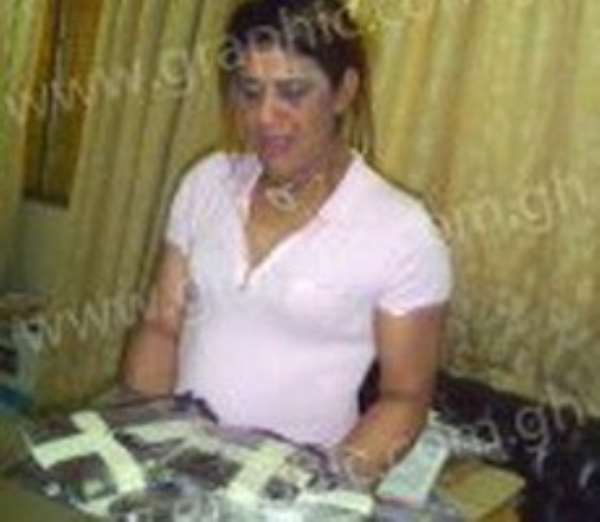 A 37-year-old Moroccan woman has been arrested by Narcotics Control Board (NACOB) officials at the Kotoka International Airport (KIA) in Accra, Ghana, for allegedly trafficking in narcotic drugs.

The suspect, Fatima Elouardi, who travelled from Sao Paulo, Brazil, via Dubai on Emirates Airlines, was arrested with 2.7 kilogrammes of cocaine shortly on arrival on Thursday, April 5, 2012.

The street value of the cocaine is $1 million.
The Executive Secretary of NACOB, Mr Yaw Akrasi-Sarpong, who disclosed this to graphic.com.gh in Accra,said Fatima's accomplice, identified as Youssef Salloum, 41, was on the run.

The security agencies have mounted a search for the arrest of Salloum, a Lebanese resident at Dzorwulu in Accra.

He said Fatima's arrest was the result of collaboration between NACOB and its international partners which had been monitoring the movement of the suspect and her accomplice for some time.

According to Mr Akrasi-Sarpong, Fatima had been flying in and out of Ghana for some time now and Sao Paulo had always been her destination.

She was said to have first travelled from Morocco to Accra on March 19, 2012 and had been met on arrival by Youssef, who checked her into the Golden Tulip Hotel.

The following day, Youssef bought an Emirates Airline ticket for her and took her to the Kotoka International Airport to travel to Sao Paulo.

In Sao Paulo, Fatima is believed to have met her alleged supplier, Kamil Jawahiri, alias Salim, also a Lebanese, who used to live in Ghana but has relocated to Brazil.

After meeting with the suspected suppliers, Fatima is said to have left Sao Paulo for Accra on Thursday, April 5, 2012.

On arrival, she went through arrival formalities but walked out of the airport without claiming her luggage. Rather, she called Youssef, her accomplice, on phone to inform him that she had arrived safely.

According to Mr Akrasi-Sarpong, unknown to her, NACOB and its international partners had been monitoring her movement and as she waited outside the airport to be picked up, she was arrested and taken back to the Arrival Hall to claim her luggage.

The NACOB boss said after Fatima had finally picked her luggage and her bag had been opened, the drug was found concealed under the bag.

Upon interrogation, he said, the suspect broke down and admitted to the offence.

The executive secretary said the suspect used to live in Togo with her husband, an Indian, but they relocated to Ghana.

While in Ghana, the suspect got to know Kamil but they lost contact later on.

However, after eight years, the two reconnected through the Internet and later started the drug trade.

Mr Akrasi-Sarpong said the Criminal Investigations Department of the Ghana Police Service, acting on a tip-off, had arrested Youssef at a house at West Legon in Accra in December 2009.

A search in the house led to the discovery of six slabs of solid substances which were confirmed by analysts as cocaine.

Mr Akrasi-Sarpong said Youssef was arraigned before an Accra Circuit Court charged with the offence but the case dragged on till the end of 2010.

For some strange reasons, he said, Youssef was acquitted and discharged and thereafter he relocated from West Legon to Dzorwulu.

Picture 1 Suspect Fatima Elouardi displaying the drugs after her arrest.

Picture 2 Shows Youssef Salloum, the Lebanese businessman who is wanted in connection with Fatima's arrest.