Why Rawlings Must Not Campaign For Mills 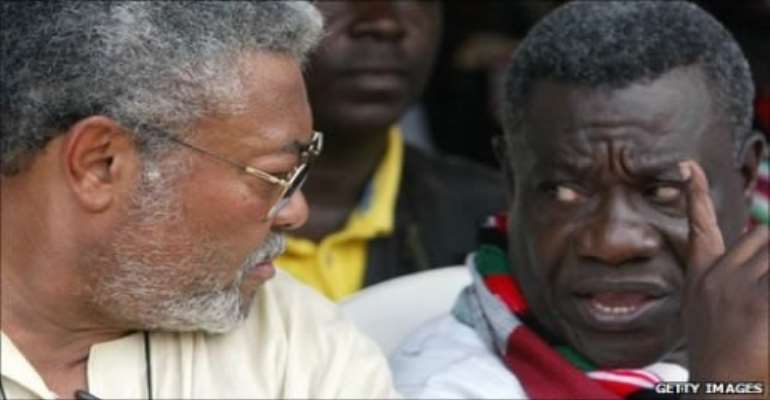 The frantic efforts by some Ewe chiefs and some prominent members of the NDC trying to reconcile the ex-President Jerry John Rawlings and his protégée, President Attah Mills, will be fruitless. If Rawlings is a man of principles, he should not entertain any delegation from anywhere on this planet to his residence, whose only aim is to get him reconcile with Mills just to campaign for him to win a second term.

Rawlings defied every reasoned argument and advice to pick Mills over long time loyalists like Goosey Tandoh and Obed Asamoah to be his successor at Swedru. Such autocratic action by Rawlings alienated some of the Party's stalwarts and created splinter groups within the NDC Party. Despite this fact, Rawlings stood by the Professor and made him the leader of the Party. Since the Swedru Declaration, Rawlings had been unflinchingly loyal to Mills despite two devastating electoral defeat at the hands of President Kuffour and the NPP in 2000 and 2004. In the 2008 general elections, it was Rawlings who single handedly returned the then opposition NDC and Mills to the Castle against a well-resourced and funded ruling New Patriotic Party. But today, Rawlings has become a pariah in the NDC; a Political Party whose Constitution he signed with his own blood.

With Mills at the Castle, he surrounded himself with people who sat on the fence while the Party was languishing in the opposition. They quickly advised him to be his own man by sidelining Rawlings who had done all the dirty work to put the Party back in power. Soon, corruption engulfed the Party and Ministers and other appointees began eating with both hands while some even took their girl -friends to Europe at the expense of the tax-payer. Some deputy Ministers who had never worked in their life were able to pay the dowry of their fiancées and chartered a whole plane to engage them for marriage. Joe Gidisu, the Minister of Road and Transportation, a man who had been struggling in life, suddenly was able to purchase an expensive BMW salon car. Ministers, deputy Ministers, the Communication Team and other appointees have all become nauseatingly arrogant and vulgar.

As a matter of fact, the surest and the easiest way to obtain a political appointment in Mills' government, members of the NDC Party have to brazenly insult Rawlings and his family on a political platform. In welcoming Obed Asamoah back to the NDC fold, Asiedu Nketiah, the general secretary of the NDC, remarked; “the barking dog that chased you out of the NDC, has been tamed.” This statement came from a man who once begged the crumps off Rawlings' dining table. Party supporters known as foot soldiers, are able to chase District Commissioners and other appointees from their offices. They are able to commandeer public structures and even set their own Party offices ablaze with impunity. Ludwig Hlodze, the National Youth organizer of the NDC, was able to go home from office in a motorcade like some head of State. What insolence! Indiscipline has characterized and crippled the administration while the President of the Republic looks helpless.

In the meanwhile, the Government has been losing cases after cases at all levels of our judicial system to the opposition NPP notable among them are the Ya Na murder trial and Ghana at 50. Since the NDC came to power, they have lost about 10 cases to nothing to the opposition NPP. The Mills' administration is such inept and incompetent that Spiro Gabrah, a Rawlings' loyalist, tagged them “Team B administration.” When we thought we have seen and heard everything negative about this administration, then appeared the mother of all scandals, the Woyomegate.

This scandal has opened a window into the operations of this out of control NDC administration for the entire nation to see how some top and influential members of the administration have conspired to steal our money with the tacit knowledge of Mills himself. According to the EOCO report, the President twice ordered them to stop the GH 58 million debt payment but his orders were flouted yet he was unable to raise a finger at those involved. His then Attorney General, Martin Amidu, who tried to prosecute those connected to the scandal was spuriously fired under some trumped-up charges by the President. It took Ken Agyapong, a fire and brimstone breathing opposition Member of Parliament for Asin north, to expose such an “unprecedented and gargantuan” corruption in the nation's history.

In response to such corruption and indiscipline, Rawlings has berated the President and his administration calling them “greedy bastards” and many colorful names. Of course, Rawlings' criticisms of Mills have been strident and incessant since the man had killed many on account of probity and accountability as the bedrock of his principles. He feels used by Mills' initial seemingly humility that has turned out to be hypocrisy. The frosty relationship between the two men sank to the lowest ebb when Rawlings and his wife were jeered and booed at the Sunyani Coronation Park during their Convention in July 2011.

With the numerous nasty and the negative statements Rawlings has made about Mills' administration all these years, what is he going to tell the people that will change their mind to vote for him? Is he now going to lie to them if he is truly a man of principles? In the interest of Ghana for which he has shed many blood, Rawlings should not reconcile with Mills for purely campaign purpose. In fact, he will be a hypocrite of the highest order if he allows himself to be convinced to mount a political platform to campaign for Mills after telling Ghanaians his own Party is infested with “corrupt and greedy bastards.” This is the same man who has been calling for the heads of ex-officials of the NPP administration for perceive corruption. So how can he accuse Mills' administration officials of corruption and then campaign for them to win a second term? What happened to his core values of probity and accountability?

Besides, he will be dumped again soon after he obtains victory for them because Mills and his hangers-on will not need him any longer. This is Mills' last election. They need him now so they will continue to enjoy the pecks of incumbency and then loot the country blind. He should not entertain any reconciliation that is premised solely on electioneering campaign for this year. After suffering humiliations and indignities from nonentities such as Asiedu Nketiah, Rawlings cannot and must not campaign for people like Asiedu Nketiah to continue to rape the country's economy. It will go against everything he stands for. This is the time for Rawlings to let them know the difference between men and boys.

What they are doing now is to employ scare tactics to convince Rawlings to mount the platform to campaign for Mills. Their argument is whatever his problem with the current administration is, he will be better off under Mills than Nana Addo's presidency. And that Nana Addo will hand him over to The Hague for his past crimes for which Rawlings is now been shield by the Constitution. Nonsense! Nana is a true adherent of Democracy and will not tinker with the Constitution in order to get his pound of flesh. Nana does not consider Rawlings an enemy.

After all, when Rawlings was busted for the May 15, 1979 insurrection, the then little known Nana Addo was the one who represented him as a defense Attorney before he was freed by Boakye Djan and his rebels on June 4, 1979. Nana does not believe in retributive and pay back politics. His main goal is to up-lift his people from grinding poverty. He wants to create a society where the individual could actualize their dreams and aspirations to the highest heights of their ability and God-given talent. But one thing is for sure Nana will enforce the Constitution to the letter. Under his presidency, nobody will be above the Law not even his cabinet and appointees. Under his presidency, Woyomegate will never occur. You can take that to the Bank.

In conclusion, Rawlings cannot allow himself to be cajoled or convinced to hold hands with Mills and campaign for him knowing well that Mills embraces corruption and indiscipline and rewards such behavior. That will be contrary to his core values of probity and accountability for which many have been put to death. The Rubicon has been crossed.

The author can be reached at [email protected]