No Easter for me, please 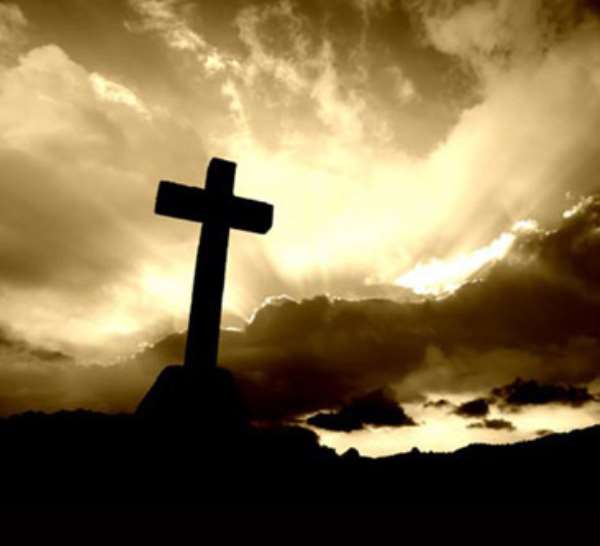 Hello, my brother, happy Easter to you.
I beg, no Easter for me, please
Do you mean to tell me that you don't celebrate Easter?

No, this True Born African doesn't waste his time on such nonsense.

Serious, you are saying that Easter is nonsense?
Precisely, it is sheer nonsense and the only surprise is that many otherwise educated and intelligent Africans continue to celebrate this shambolic cultural imposition.

What, are you calling the celebration of the rise from the dead of our Lord Jesus Christ a sham and Christianity a cultural imposition?

Rise from the dead? Get serious! Do you believe the fanciful tale that someone rose from the dead. And were it to be true, what has that got to do with me? Christianity is definitely a cultural imposition on Africans and we know how it was imposed.

I know that you hold very strong opinion, but this is just too much. This is sheer blasphemy.

You started it and the only profane sacrilege I see is intelligent people that refused to use their brains. It is sheer nonsensical for Africans to continue to celebrate their cultural enslavement. If every scientists in the world today agree that we Africans were the first human beings on earth, I say that we Africans have no business supplicating to a Caucasian god and his supposed son. It is damned stupid. The only blasphemy I see here is people that go around telling stupid lies, concocting falsehood to create a religion for a non historical person.

Holy Zimbabwe, are you claiming that Jesus Christ is a non historical person?

You certainly have fanciful phrases, holy Zimbabwe. Jesus was never a historical person and Christ is not the name of a person? There is absolutely no record to prove the historicity of Jesus.

What!
If you don't know it, Christ simply means 'anointed,' it is not the name of a person. Outside of the Bible, there is not a single historical record that mentioned a Jesus. There was an obscure Yesu ben Pandera in some Hebraic text, but it has nothing to with the fantasy you called Jesus Christ. Were he to have even existed, why should a Jewish lad whose birth, life and death remain disputed be of relevant to us in Africa?

You are certainly blasphemous. Are you questioning the integrity of the Bible?

To begin with, the Christian Bible has no integrity, so it is difficult to question what does not exist.

So you don't accept that the Bible is the work of God?

Ah, the book you called the bible has too many errors, contain too much atrocities, and hold too many absurdities that it cannot be considered the book of the devil, much less that of a god.

Huh! You don't believe in the Bible?
Believe what in the Bible?
That is was inspired and that it was accurate.
Only the most ignorant, the most uneducated, the most gullible would even begin to defend the accuracy of the Bible.

But it is the word of God?
You sound like a lame priest trying to defend the indefensible. Apart from Ecclesiastes, there is hardly a book in the Bible that makes any sense. What can we learn from Genesis, Deuteronomy, the ranting of those crazed Hebraic Prophets or that loony book they called Revelation? Or what spiritual benefit can we derive from those stupid, conflicting tales of the so-called New Testament?

Do you refute the historical accounts recounted in the Bible?

If you choose to call those fanciful and infantile tales in the Bible historical accounts, you would have to support it with historical facts.

But the Bible has been proven to be word of God.
Proven by whom? No one but a charlatan would prove a poorly written, historically inaccurate, scientifically untenable pack of ignorant lies called the Bible as the word of a god?

So you don't believe in the story of the Creation?
I beg you not to insult my intelligence with such crappy tales like that of the Biblical accounts of the creation which, by the way, have two unnecessary accounts.

Do you mean to tell me that the Biblical Creation story is not accurate?

It is not only inaccurate, it is patently false. No one can create anything out of nothing.

But God created the heaven and the earth and all the things therein.

So how did we come to be?
That is among the most idiotic questions the Christians go around asking. Why do we have to be created from something?

Why is impossible to give the only honest answer which is that we don't know?

But we must have come from somewhere?
Not necessarily. We could have been here all along. The honest truth is simply that where we come from and where we go remain unknown mysteries, but that does not mean that we have to attribute it to some stupid tales of a god baking human beings from clay?

You are ridiculing the Biblical Creation account?
The tale is so infantile that it is worthy of only ridicule.

Don't you accept that Jesus died for your sins?
Please, how could a Jesus die for my sins? How could I commit a sin long before I was born?

But the Bible said that he died to cleanse our sins.

But it was written that he came to clean the Original Sin?

Do you honestly believe in an Original Sin? If only the Christians will realise the enormous amount of damage they are doing to their own cause with all these stupid and totally incredible credos about original sins. What type of god will keep on punishing generations upon generations because some ancestors committed some crime? What manner of tyrannical and vengeful god is that, and is that a god worthy of our veneration? If the president of Ghana decided to punish a child for the crimes committed by its parent, we all will be repulsed and rise up in anger. Why are we celebrating a god who purportedly continues to pursue and punish its enemies into eternity?

This is serious.
No, it is not. All that is required is that people will stop to think. They should ask themselves simple questions as to the veracity of what they are told. Buddha asked us not to believe anything unless it agrees with our reason. The Christians would want us to believe the most stupid and incredible tales.

Do you assert that the whole Bible is false?
I assert no such thing. What I assert is that the tales contained in the Bible hold no unalloyed truth that could inspire any reasoning person. They have absolutely nothing to do with us as Africans, and it is time we free ourselves and our minds from the dungeon of its falsehoods.

But can you point to any falsehood in the Bible?
The Bible is packed full of falsehoods that are simply too numerous to recount here. Suffice to say however that the story of the Creation is the stupidest tale ever invented. It simply contradicts everything we know about astronomy and geology. We live in a Solar System; that means that all our lives depend on the Sun. The only intelligent thing for any god to do was to create the sun first. The two accounts of the biblical creation did not put sun first. And we know that the universe is considerably older than the about six thousand years given by the Biblical account. How could I continue to believe that the Earth is the center of the universe and that the sun journey around it? How am I to believe that by stopping the sun the day could be lengthened or that a Hebrew General can stop the sun so that he could massacre his enemies? And don't I have to ask why a compassionate and loving god will choose a merciless people like the Jews as his Chosen people?

But don't you think that we all could learn from the exemplary life of Jesus?

What is exemplary about the life of the Biblical Jesus? He was intolerant as his supposed father, Jehovah. He exemplified the ignorance of his time. He cursed like a drunk sailor and did no deed that is worthy of emulation? He was not tutored in any discipline; he never did an honest work or earned an honest wages. He roamed the countryside with his discipline and lived on alms. Is that a life worthy of emulation?

How about his many miracles?
Who believe or want miracles? Why should any honest and intelligent person want something for nothing? There is nothing more elevating than to earn an honest living. It is time we in Africa get off this miracle, miracle things. It only makes us lazy. It only makes us dependent on begging. No honest man can perform a miracle. Miracle is nothing but a child of mendacity. And am I to think highly of a man stupid enough to utter these words: “If thy right eye offends thee, pluck it out. If thy right hand offend thee, cut it off,” “If any man will sue thee at the law and take away thy coat let him have thy cloak also,” “Think not I come to send peace on earth. I came not to send peace, but a sword,” “For I am come to set a man at variance against his father, and the daughter against her mother,” “And every one that hath forsaken house, or brothers, or sisters, or father, or mother, or wife, or children, or lands, for my name's sake, shall receive an hundredfold, and shall inherit everlasting life?”

But what do you say to the millions who celebrate Easter?

I have no message for anyone; I'm not a prophet. What I believe every honest person should do is to get a good education and to question every assumption until it agrees with his own reasoning. Honest people should desist from participating in falsehoods. The history of Christianity is not shrouded in any mystery; ditto the stories behind the Bible. It behooves us as Africans to learn about the tools that were used to enslave and colonized us. The Bible was not inspired by any god; it was collected and sanctified by men at their Nicean Conference for the purpose of enslaving the earthen among which they counted Africans.

Election Petition: Supreme Court is not a forum for “organis...
44 minutes ago

Two grabbed for child trafficking in Tatale
44 minutes ago