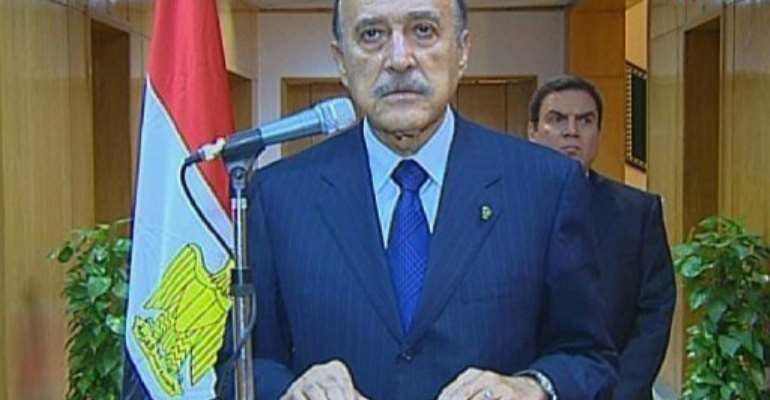 CAIRO (AFP) - Former spy chief Omar Suleiman, a pillar of the ousted regime, decided on Friday to run in next month's presidential vote, in a surprise twist to a contest to elect Hosni Mubarak's successor.

His change of mind came after hundreds of demonstrators gathered in a Cairo district to urge Suleiman, who served as Mubarak's vice president before the strongman's overthrow last year, to contest the poll.

"I was very moved by your strong stand," Suleiman said in a statement carried by the state news agency MENA.

"The call you issued today was an order, and I am a soldier who has never in my life disobeyed an order ... I cannot but reply to the call and join the race despite the obstacles and difficulties," he said.

The former military man who took over as intelligence chief in 1991 vowed to "make every effort ... to achieve the expected changes and complete the aims of the revolution, and live up to the hopes of the Egyptian people."

Suleiman had said on Wednesday that he would stay out of the May 23-24 first round of the election because the nomination procedures were too tough. Registration ends on Sunday.

"I tried until yesterday morning to overcome the obstacles related to the current situation and the administrative, financial and organisational demands of candidacy, but I found that was beyond my capability," he said.

Candidates bidding for the presidency need 30,000 signatures from people or the support of a party in parliament.

The military says it will hand power to the winner by the end of June. The frontrunners include Khairat el-Shater, a leader of the powerful Muslim Brotherhood, and former foreign minister and Arab League chief Amr Mussa.

Many in Egypt regard Suleiman as having formed part of the inner circle of Mubarak, who shortly before his fall named the intelligence supremo as vice president.

Born in 1936 to a well-off family in the southern town of Qena, Suleiman graduated from Cairo's military academy in 1955.

Under Mubarak, Suleiman served as a negotiating partner for the United States, Israel and the Palestinians, orchestrating a series of short-lived truces.

Also ahead of the registration deadline, thousands of people rallied in central Cairo on Friday in support of a Salafist candidate who could be ruled out because his late mother reportedly held US nationality.

Under the country's electoral law, all candidates for the presidency, their parents and their wives must have only Egyptian citizenship.

"The people want Hazem Abu Ismail! No to manipulation!" the demonstrators shouted after making their way through central Cairo to Tahrir Square, epicentre of the January-February 2011 revolt.

The protesters, including women in full Islamic veil, carried portraits of Abu Ismail and waved their fists, angrily condemning any attempt to disqualify their candidate.

Abu Ismail launched his candidacy on March 30 with a large motorcade that took him to electoral commission headquarters in Cairo.

The Muslim Brotherhood's Freedom and Justice Party won the most seats in parliamentary elections earlier this year, but the Salafists captured nearly a quarter themselves.

The Brotherhood had initially said they would not run a candidate for the presidency.