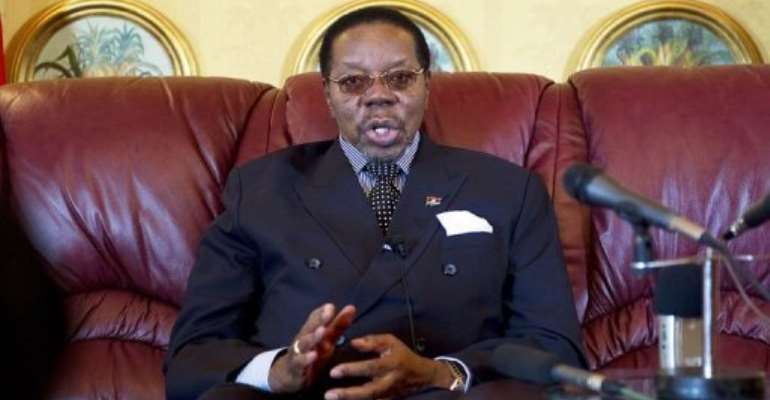 The source said Mutharika died shortly after midnight, although the government has yet to make a formal announcement. By ALEXANDER JOE (AFP/File)

But a full day after his death, and even as the United States offered its condolences and voiced fears about the delay in the transfer of power, state media was still insisting that Mutharika was in South Africa for treatment.

News of the 78-year-old's death nevertheless trickled into the country through foreign radio, private local media and social networks.

"The president died yesterday, and his body has been flown to South Africa for embalming and for the process to be dignified," a government official, speaking on condition of anonymity, told AFP.

"The official announcement will come later on," the source added.

But the government's refusal to announce Mutharika's death has heightened fears of a political crisis in Malawi.

For while under the terms of the constitution, Vice President Joyce Banda should immediately take office, she was expelled from the ruling party in 2010.

She formed her own People's Party after Mutharika anointed his brother Peter as his successor, and one source close to Mutharika's party said his allies were trying to keep Banda from power.

"The inner circle of the ruling Democratic Progressive Party has been meeting secretly to thwart Joyce Banda from becoming president," the source told AFP.

"They want to push forward the name of Peter Mutharika as acting president until 2014," the source added.

"The idea of flying his remains to South Africa was to buy time, for embalming and for a dignified funeral as he will come back in a very expensive casket," the source said.

In the midst of the news blackout, Banda called a news conference at her home in the capital Lilongwe to denounce the government for failing to come clean, and to make it clear that she was next in line for the presidency.

"The people of Malawi have the right to know about the state of health of the president," Banda said, in remarks carried live on private radio.

"I would like to appeal to all Malawians and the international community, that we should adhere to the constitution of the Republic of Malawi (which) states that if the president is incapacitated, the vice president shall assume office."

Washington, which last year joined many donors in suspending aid to Malawi over concerns about Mutharika's governance, threw its support behind Banda.

"Malawi's constitution lays out a clear path for succession and we expect it to be observed," Johnnie Carson, the assistant secretary of state for African affairs, said in a statement.

"We are concerned about the delay in the transfer of power. We trust that the vice president who is next in line will be sworn in shortly."

Mutharika, a former World Bank economist who first came to power in 2004, was re-elected with a sweeping majority in 2009 as president of the poor southern African country.

But he increasingly came under fire for attempts to rein in the media and to shield the government from public criticism.

His feuds with donors and lenders such as the International Monetary Fund have hamstrung the economy in this aid-dependent nation. Now Malawi is suffering from shortages of foreign currency that have left it unable to import enough fuel.

Malawi suffered for decades under the brutal dictatorship of Kamuzu Banda, and is proud of the hard-fought democratic freedoms that were ushered in with multi-party elections in 1994.

Any attempt to circumvent the constitution would certainly meet with resistance, analysts said.

"It's automatic that she takes over the presidency," lawyer Wapona Kita told AFP. "The reality on the ground is that Joyce Banda takes over until the remainder of the term in 2014, unless someone wants to change the rules."