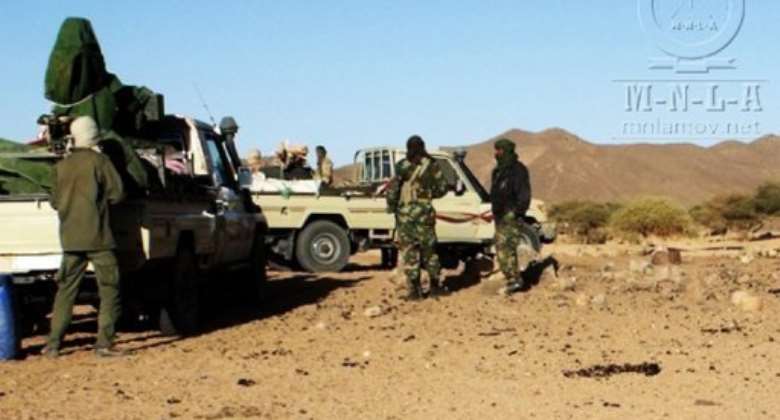 The Tuareg rebels declared the independence of Mali's north, a desert homeland they call Azawad. By (AFP/MNLA/File)

BAMAKO (AFP) - Mali's Tuareg rebels declared independence Friday in the north, a move shot down by Islamist insurgents and the international community, as fears loomed of a humanitarian disaster.

Africa and Europe roundly rejected the National Movement for the Liberation of Azawad's (MNLA) declaration of independence as a chorus of calls mounted for a solution to the crisis which has split the coup-wracked nation in two.

Britain said it was temporarily closing its embassy in Mali due to the "unstable" situation and "lack of constitutional rule".

A democratic success since its last coup 21 years ago, Mali is now roughly divided into a rebel-controlled north and junta-controlled south and a group of radical Islamists have exploited the chaos to swoop in and install sharia law.

The Islamist group, Ansar Dine, moved in alongside the MNLA but has given short shrift to their independence plans.

He was speaking in a video exclusively obtained by AFP and France 2 television filmed after the Islamists' takeover of the fabled city of Timbuktu, where they have imposed sharia law, forcing women to cover up and burning down bars.

He said they had "more than 120 prisoners" including thieves.

"We have tied them up and taken their weapons. We beat them well and it's likely we will slit their throats," he added, while it was not clear if this threat was aimed at all prisoners.

In the city of Gao, Ansar Dine kidnapped seven Algerian diplomats, according to witnesses and the Algerian foreign ministry.

While the Islamists appeared to have the upper hand, the separatist MNLA on Friday morning declared the independence of their desert homeland which they call Azawad, where several rebellions have played out in past decades.

The latest has been fuelled by a haemorrhaging of weapons from Libya following Moamer Khadafi's downfall.

"We solemnly proclaim the independence of Azawad as from today," Mossa Ag Attaher, a spokesman for Mali's National Movement for the Liberation of Azawad (MNLA), said on France 24 television, confirming a statement on the group's website.

He said the MNLA, which captured northern Mali with Islamist groups over the past two weeks following a coup in the capital Bamako, would respect "the borders with other states" and would halt all military operations.

The African Union dismissed it as "null and of no value whatsoever."

Algeria declared it would "never accept questioning Mali's territorial integrity" and is pushing for dialogue to resolve the crisis with its southern neighbour, Prime Minister Ahmed Ouyahia was quoting as saying on Friday.

The European Union also rejected any break-up of Mali and called for talks to resolve the crisis.

"The EU has made clear throughout the crisis that it respects the territorial integrity of Mali," Maja Kocijancic, the spokeswoman for EU foreign affairs chief Catherine Ashton, told AFP.

After decades of fighting for independence analysts warn it will not be easy to dislodge the Tuareg from the north now that they have staked their claim.

"Much of the population of the north ... is made up of sub-Saharan Africa ethnic groups such as the Songhai and the Peul, who consider themselves to be Malian and have no interest in an independent Tuareg state."

Amnesty International warned that north Mali was on the brink of a "major humanitarian disaster" while Oxfam and World Vision said crippling sanctions against the junta could have devastating consequences.

"All the food and medicine stored by major aid agencies has been looted and most of the aid workers have fled," said Gaetan Mootoo, Amnesty International's researcher on west Africa.

"The population is at imminent risk of severe food and medical shortages that could lead to many casualties especially among women and children who are less able to fend for themselves."

More than 200,000 people have fled since the rebellion began in mid-January.

Angry at government's handling of the insurgency a group of low-ranking soldiers lead by Captain Amadou Sanogo on March 22 ousted President Amadou Toumani Toure just weeks before he was due to step down after an election.

In Bamako on Thursday, regional mediator Burkina Faso Foreign Minister Djibrill Bassole said an announcement in "the right direction" was expected from coup leader Sanogo and that sanctions could be lifted soon.