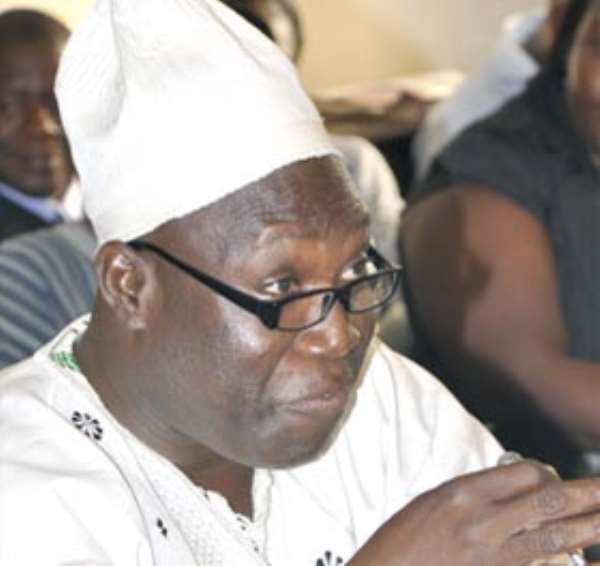 Accra, April 4, GNA – Alhaji Inusah Fuseini, Deputy Minister of Energy, on Wednesday said Government had a vision for an energy system that would secure reliable supply of energy for all sectors of the economy.

He said the vision included achieving at least 10 per cent contribution of modern renewable energy services in the electricity generation mix by 2020.

Alhaji Fuseini made the observation when he was addressing the opening session of the maiden West Africa Solar Forum and Exhibition being organised by UK-based IMPS and EXPO Promotions, in partnership with the Association of Ghana Solar Industries and supported by Ghana's Energy Commission and Ministry of Energy.

The two-day forum and exhibition is on the theme: “The Brighter Way Forward”.

It is being attended by architects, property developers, utility companies, regulatory authorities, Ministries, Departments and Agencies, investors and financial institutions, installers and distributors, manufacturers, contractors and non-governmental organizations to collaborate in the development of West Africa's solar industry.

Alhaji Fuseini said the Ministry was supporting the Energy Commission to undertake a more detailed wind resource assessment of potential sites along the coast for the development of wind parks for power generation.

He announced that Volta River Authority was setting the pace to install the first two megawatts solar park for integration into the national electricity grid by 2015, and called on investors to come on board to invest in that sector.

In addition, the Ministry is collaborating with the World Bank under the Ghana Energy Development and Access Project to provide loans with grant facility through rural banks to supply rural homes in remote off-grid communities with solar systems.

Alhaji Fuseini said about 2,700 households in 11 districts had so far been supplied with solar systems over the past two years.

“As an indication of government's commitment to renewable energy; the Ministry has upgraded the Renewable Energy Unit at the Ministry to a Directorate similar to the Petroleum and Power Directorates.

“This new Directorate will formulate, plan and monitor policies and strategies for the promotion of all forms of renewable energy resources in the country, to achieve the intended 10 per cent contribution of modern renewable energy services in the electricity generation mix by 2020,” he said.

Alhaji Fuseini said a renewable Energy Bill had been passed by Parliament to provide the regulatory framework and fiscal incentive to attract private sector investment in the renewable energy sector.

He said advantages of solar power and solar products could be many, but they all followed the same basic business or investment model of high upfront cost with payback over time.

“Everything, from large solar panels to simple solar pond pumps has a break-even point, where the device begins to pay for itself. This is probably the biggest advantage of solar energy products – they are one of the few consumer products that actually pay for themselves if built reliably enough,” Alhaji Fuseini said.

He said though there were many advantages of solar power, there would be many scammers trying to take advantage of ignorance of the public and commended the organisers of the event for their foresight.

Dr Nii Darko Asante, Technical Director, Ghana Energy Commission, said Africa was blessed with much more sun but ironically, it was not introduced to the solar technology early to power its electricity generation due to the initial cost involved.

He said renewable energy was expensive and capital intensive and that accounted for the reason most developing countries were not using the technology, and pledged the Commission's support to promote solar energy technology, especially in Ghana.

“We all have a responsibility to advocate the promotion of solar energy and it is up to our policy makers to shape people's mind for the brighter future,” Dr Darko said.

He said solar technology was full of promises but it came with a price, and called for innovations to make it cheaper and accessible to the people.

He said it developed solar solutions from more than 10 megawatts and it hoped to introduce the solutions to Africa, to ensure that the solar technology emerged on the continent.

Solar West Africa forum and exhibition is expected to become an annual gathering of solar professionals, who would contribute to the regional growth of the industry in future.