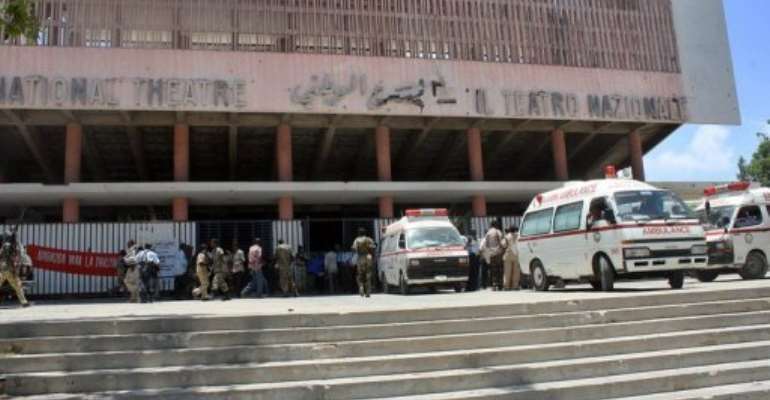 Ambulances outside the theatre after the bombing. By Abdurashid Abdulle (AFP/FIle)

MOGADISHU (AFP) - A young woman strapped with explosives blew herself up Wednesday during an address by Somalia's prime minister in Mogadishu, killing four people, including the country's Olympic and football bosses.

She detonated her suicide belt as Prime Minister Abdiweli Mohamed Ali was on a podium addressing 200 people gathered to mark the first anniversary of the Somalia's satellite TV network, an AFP reporter who witnessed the incident said.

The prime minister, and seven other ministers standing beside him when the young woman set off her explosives, were unharmed.

Osman could not give the identity of the two other victims.

Seconds after the blast, chaos filled the venue as the dead and the wounded could be seen slumped on their chairs and lying on the floor while police escorted some of the injured to awaiting ambulances.

The Islamist Shebab rebels who have carried out similar attacks in the past stopped short of claiming direct responsibility.

"The action was carried out by people who support the Shebab," Sheikh Ali Mohamed Rage, the group's spokesman, told a pro-Shebab radio.

"The cowardly attack was carried out by Shebab non-believers," Mohamed told Radio Mogadishu. "The attack is contrary to the teaching of Islam."

Somalia's Chinese-built national theatre was re-opened last month by President Sharif Sheikh Ahmed and the prime minister for the first time in 20 years.

The president of the world's governing body, Sepp Blatter, expressed shock at the death of the two Somali sports chiefs.

"I knew both men personally and can only say good things about their endless efforts to promote sport and football in their country. They will be sorely missed," the FIFA president said.

The pair had last week inspected the reconstruction of the national stadium in Mogadishu, a city which had slowly been coming back to life since Somali and African Union forces secured most of it late last year.

"When this construction completes and the security has fully been tightened we will be able to host international matches here in Mogadishu," Nur had said in a statement.

Somalia's deputy sports minister had said people were eager to "benefit from the peaceful atmosphere" in Mogadishu and his minister had praised all those who had been killed or wounded in recent years while promoting Somali sports.

The stadium was previously used by the Al-Qaeda-affiliated Shebab rebels as a training centre, turning the pitch into a firing range to test homemade armour piercing bullets.

But last year, Western-backed African Union troops seized the stadium and used it as a forward base for assaults on rebel holdouts before turning it over to the government for restoration as a sports venue.

Despite the lull in street fighting, Mogadishu has been plagued by a series of suicide and grenade attacks since the Shebab rebels abandoned fixed bases in August and reverted to guerrilla tactics.

A suicide bomber last month killed at least five people in an attack at the heavily guarded presidential palace, which the hardline Shebab militia claimed.

The Shebab carried out their deadliest suicide attack in October 2011 when a bomber rammed an explosives-laded vehicle into a government compound, killing at least 82 people.

In regions under their control, the extremist militia have banned football, watching movies, Western music and dressing, with offenders often flogged or publicly executed.

Ethiopia and Kenya have deployed troops to southern regions of the war-torn nation to crush the Shebab, who have waged bloody battles to topple Somalia's Western-backed government.

Why appoint an AG-designate who’s interested in disenfranchi...
50 minutes ago