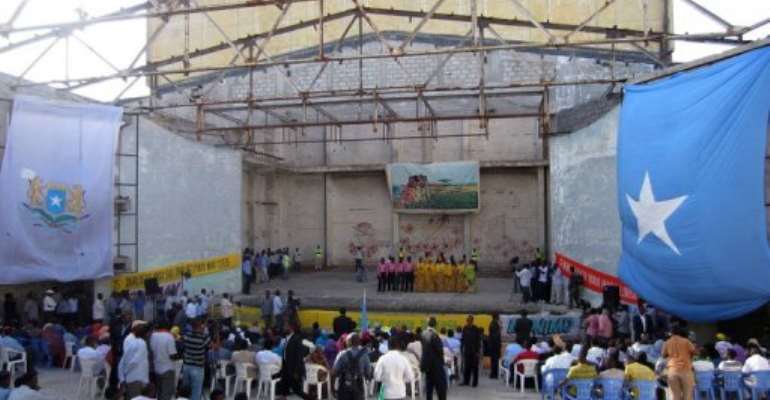 MOGADISHU (AFP) - A young woman strapped with explosives blew herself up Wednesday at a ceremony in the Somali national theatre attended by the prime minister and other officials, killing at least two.

She detonated her suicide belt as Prime Minister Abdiweli Mohamed Ali was on a podium addressing 200 people gathered to mark the first anniversary of the country's satellite TV network, an AFP reporter who witnessed the incident said.

The prime minister, and seven other ministers standing beside him, were unharmed but witnesses said Somali Olympic Committee Aden Yabarow Wiish and Somali Football Federation chief Said Mohamed Nur were killed in the attack.

"The bodies of the two people killed in the blast have been taken by the Somali police," police officer Mohamed Abdi told AFP, without confirming the victims' identities.

Mogadishu has been plagued by suicide and grenade attacks since the Al Qaeda-affiliated Shebab rebels abandoned fixed bases in the war-riven city last August and reverted to guerrilla tactics.

A suicide bomber last month killed at least five people in an attack at the heavily guarded presidential palace, which the hardline Shebab militia claimed.

The Shebab carried out their deadliest suicide attack in October 2011 when a bomber rammed an explosives-laded vehicle into a government compound, killing at least 82 people.