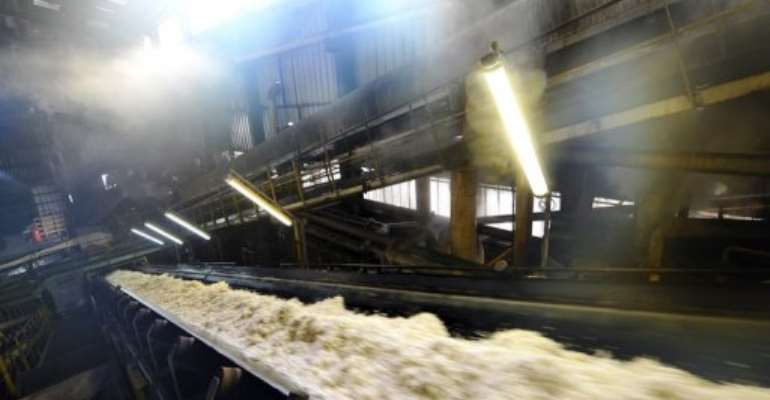 The pulp of sugar beets on a conveyor belt at a refinery in 2011. By Philippe Huguen (AFP/File)

KHARTOUM (AFP) - Sudan's industry minister announced his resignation on Tuesday after the opening of Africa's biggest sugar factory was postponed, which he blamed on US economic sanctions.

President Omar al-Bashir was to inaugurate on Thursday the showcase facility in White Nile state before an international audience from the Islamic Development Bank, which has been meeting in the Sudanese capital Khartoum this week.

Slick green invitation packets had already been sent out.

But Industry Ministry Abdelwahab Mohammed Osman said computer software needed to run the facility "is not ready because of American sanctions."

In 1997 the United States imposed a trade embargo on Sudan over human rights and other concerns.

White Nile Sugar placed notices in local newspapers which also cited US sanctions for the postponement.

"I offer my resignation before the president of the republic and I take the full responsibility for this," Osman said in a statement to the press, while noting that the plant's delayed opening had affected national morale.

Bashir rejected the resignation, and said a committee will investigate why the factory opening has been held up, the official SUNA news agency reported.

Osman took on the industry portfolio during a cabinet reshuffle in December.

Sudan's Kenana Sugar is the largest shareholder, with a 30 percent stake.

The Sudanese government has a 35 percent share in Kenana while the Kuwait Investment Authority has 31 percent.

Increased exports of sugar form part of the government's plan to recoup revenue lost when South Sudan separated last July, taking with it about 75 percent of oil production.

Southern oil represented more than one-third of the Khartoum government's revenues, and its biggest source of hard currency, leaving the government struggling for alternatives.