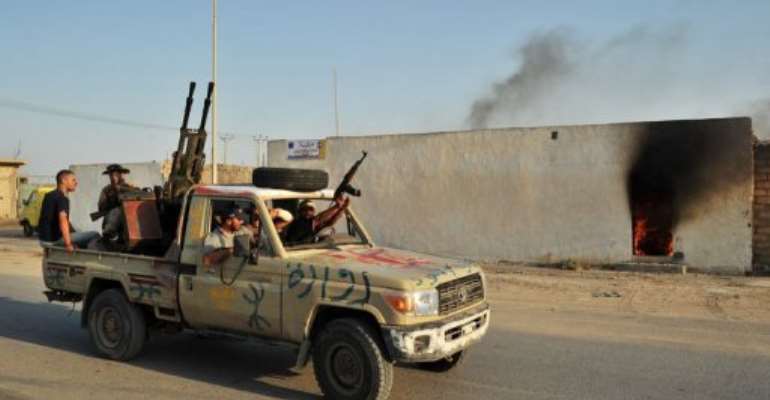 Libyan rebels drive through a street after defeating loyalist troops in Al-Jamil in 2011. By Carl de Souza (AFP/File)

TRIPOLI (AFP) - Clashes in western Libya have left at least 14 people killed and 80 others wounded in 24 hours, the ruling National Transitional Council said on Tuesday.

"Four people were killed and 35 others were wounded in Zuwarah," 100 kilometres (60 miles) west of Tripoli, near the border with Tunisia, the interim authorities said in a statement published online.

Jawher Belhir, a doctor in Zuwarah, gave a higher toll, saying five people were killed and 42 wounded in the western town.

The NTC also said that "10 people were killed and 45 others were hurt in the (nearby towns) of Regdalin and Jamil."

It said clashes were ongoing and that a delegation had been sent to the region in a bid to "calm the situation and solve the problem."

Fierce fighting erupted when former rebels from Zuwarah were detained as they passed the town of Jamil. The interim authorities said they intervened to obtain their release and negotiated an agreement.

But after the men were released, armed men from Zuwarah launched an attack.

Since the collapse of slain leader Moamer Kadhafi's regime last October, tensions have festered in and around Zuwarah, where residents belong to the Amazigh minority.

Residents of Jamil and Regdalin are accused by former rebels of standing by the regime of Kadhafi during the 2011 conflict.

Earlier, Othman Ben Sassi, a member of NTC told AFP that the situation in his native town of Zuwarah was pitiful.

"The situation is critical in Zuwarah. It is being hit by rockets fired from the (nearby) towns of Regdalin and Jamil," he said.

Libyan Interior Minister Fawzi Abdelali told journalists on Tuesday that efforts were underway to put an end to the fighting.

"The interior ministry has sent a force of 200 men towards the region," he said, urging both sides to act with restraint.

These clashes come soon after tribal fighting in the southern city of Sabha, which left more than 147 dead and 395 wounded in a week, before the government imposed a ceasefire.

The interim government has struggled to impose its authority on dozens of brigades comprising of former rebels who fought against Kadhafi's forces and who now have become a law unto themselves.