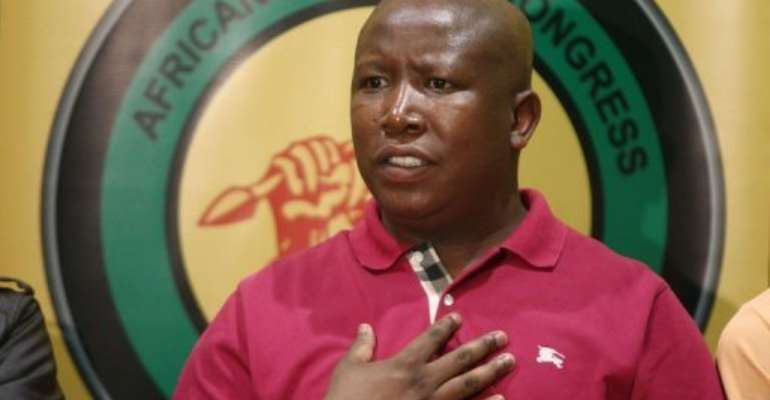 Julius Malema remains youth leader of the ANC until he exhausts his appeals. By Paballo Thekiso (AFP/File)

President Jacob Zuma, Deputy President Kgalema Motlanthe and the party's treasurer Mathews Phosa gave a televised press conference to accuse Malema of "falsehoods" and of attempting to divide the party.

The ANC leadership condemned the "shockingly crude, disrespectful and un-ANC remarks that have been in the public domain over the past few weeks," in a joint statement read out by the party's secretary general Gwede Mantashe.

"The brazen and often rude and crude rhetoric to detract from real issues facing our youth does nothing to add value to the integrity of the ANC and its leagues," he said.

"The assertion... by Julius Malema that new ideas are suppressed and that the current leadership of the ANC is dictatorial and does not appreciate new ideas is not only disingenuous but a deliberate falsehood," he added.

An ANC disciplinary panel has already moved to expel Malema, who heads the ANC Youth League, for provoking divisions within the party that Nelson Mandela led to power in South Africa's first all-race elections in 1994.

Malema remains youth leader until he exhausts his appeals. A hearing has been set for April 12 for Malema to argue why he should be spared.

Over the last two weeks, Malema appeared at public events alongside Phosa and Motlanthe, who is rumoured as a potential rival to Zuma at the ANC's leadership conference in December.

But both men said that they appeared at the events as invited guests of the Youth League, not as an endorsement of Malema's views.

"Those who use our names to try to divide the organisation will not succeed," Motlanthe said.

The ANC leadership's united stand Tuesday comes amid jockeying within the party ahead of the December meeting where Zuma will seek a second term as chief.

Given the ANC's huge support among voters, the party's leader is almost certain to become South Africa's next president.