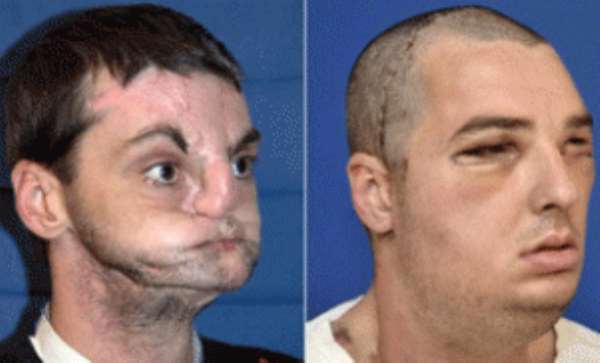 A man who was given a face transplant after living for 15 years as a recluse is recovering well, US doctors say.

Richard Lee Norris is beginning to feel his face and is already brushing his teeth and shaving, according to the University of Maryland Medical Centre

Last week he was given what physicians say is the most extensive face transplant ever carried out, including new teeth, nose, tongue and jaw.

He has also regained his sense of smell, his doctors say.

The 37-year-old cut himself off from the rest of the world and wore a mask whenever he went outside after suffering horrific injuries in a gun accident.

The surgery was funded by the US Navy, which hopes the techniques will help casualties from Iraq and Afghanistan.

Surgeons who carried out the 36-hour operation said it was part of a series of transplant operations lasting 72 hours, using organs from one donor in five patients, including Mr Norris.

He lost his lips and nose in the accident, and only had limited movement of his mouth.

Lead surgeon Eduardo Rodriguez said Mr Norris would now get his life back.

'Our goal is to restore function as well as have aesthetically pleasing results,' he said.

The US government estimates that 200 wounded troops might be eligible for face transplants.

The first face transplant was performed in France in 2005 on a woman who was mauled by her dog.

In 2010 surgeons in Spain carried out the world's first full-face transplant.