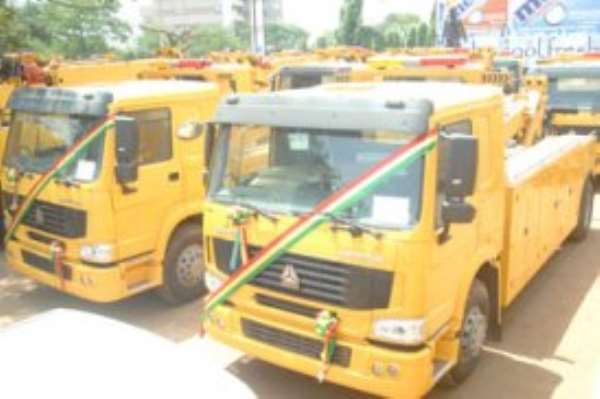 The Vice-President, Mr John Dramani Mahama, has inaugurated heavy-duty commercial towing vehicles and equipment, with a call on the Ghana Police Service to ensure strict compliance with regulations governing road safety in the country.

“You must enforce the law, since there is enough legislation in place,” he charged the service.

The equipment, belonging to Road Safety Management Services Limited (RSMSL), is meant to reduce incidents of road accidents to the barest minimum.

It is made up of 38 towing trucks, 15 ambulances, 10 motorbikes for rapid response to accident scenes, 10 pick-ups and wagons and stationary traffic lights, all procured at a cost of $15 million.

Vice-President Mahama said although the police were aware of the dangers of drink driving and defective vehicles plying the roads, they had not been able to adequately enforce the laws.

The inauguration also marked the official opening of the RSMSL as a road safety management service provider.

The National Road Safety Commission (NRSC), in partnership with the Ministry of Transport, the Motor Traffic and Transport Unit (MTTU) of the Ghana Police Service, the Driver and Vehicle Licensing Authority (DVLA) and the Ministry of Finance and Economic Planning, is the major collaborator of the RSMSLâ€ˆroad safety management project.

The inauguration of the equipment and the opening of the RSMSL came against the backdrop of high road traffic accident rates in the country.

According to the NRSC, the country lost up to 1.6 per cent of its Gross Domestic Product (GDP) to road traffic accidents annually.

Inaugurating the equipment, the Vice-President called for the speedy passage of the road traffic regulation law to ensure that an elaborate system was in place to allow private sector participation in the venture as part of the government’s quest to reduce road traffic accidents.

He also announced the introduction of a towing service levy as part of the act that would make towing service mandatorily free of charge in the nearest future.

The levy, Mr Mahama said, would be lodged in a fund for the purpose of providing free towing services for vehicle owners, thereby making it easier for disabled vehicles to be cleared immediately.

The Vice-president expressed regret at reports of deaths caused by overzealous drivers on the newly constructed George Walker Bush Highway and described the situation as unacceptable.

“Why should a development that is supposed to be positive and increase economic growth turn around to create misery for others?” he queried.

Mr Mahama noted that road traffic fatalities were usually high during festive seasons such as Easter, Christmas, as well as electioneering periods.

“It, therefore, behoves the NRSC, the police and allied bodies to ensure adequate sensitisation efforts, particularly as political campaigning will reach its peak in the ensuing months,” he said.

The Vice-President was hopeful that the launch of the 10-year strategy, with the aim of reducing road accidents, would address the adverse effects of the numerous road safety challenges that confronted Ghana.

The Minister for Transport, Alhaji Collins Dauda, for his part, said the continuous loss of the country’s human resource resulted from laxity in road traffic regulations.

He appealed to politicians and office holders not to intercede for offenders of traffic regulations because those interventions went to intimidate the police and prevent them from carrying out their mandated duties.

Earlier in his welcoming address, the General Manager of RSMSL, Air Commodore Basin Dery (retd), said an additional 88 tow trucks of various categories were being purchased to augment the fleet.

He also announced that repair and maintenance depots had been set up nation-wide, with 24-7 hour call centres for rapid deployment of emergency services.

That, he said, had necessitated the employment of some 3,000 personnel, with 10 regional depot co-ordinators, to manage activities across board.

While lauding the government and partner agencies for the immense support, Commodore Dery said the arrival of the additional fleet would increase employment opportunities for the youth, while achieving the overall purpose of reducing road crashes.