'Pharmacy On A Chip' Gets Closer 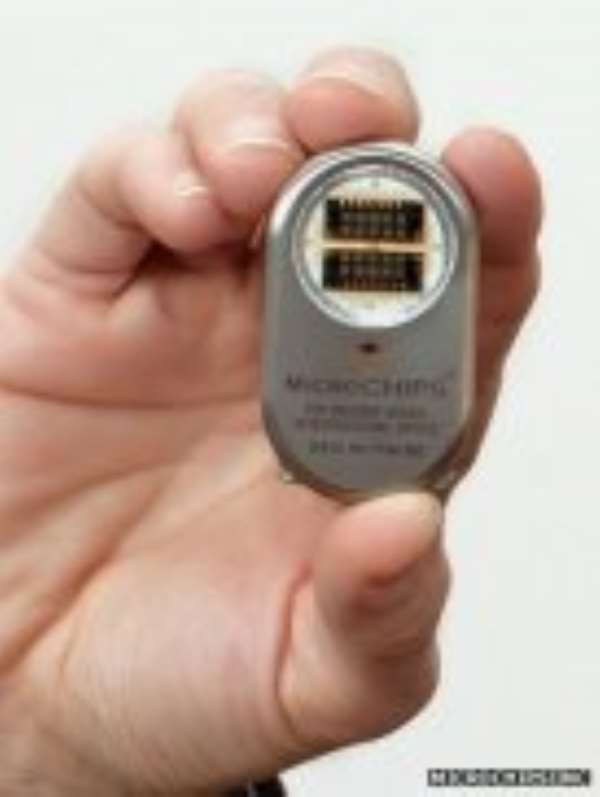 The futuristic idea that microchips could be implanted under a patient's skin to control the release of drugs has taken another step forward.

US scientists have been testing just such a device on women with the bone-wasting disease osteoporosis.

The chip was inserted in their waist and activated by remote control.

A clinical trial, reported in Science Translational Medicine, showed the chip could administer the correct doses and that there were no side effects.

The innovation has also been discussed here at the annual meeting of the American Association for the Advancement of Science (AAAS).

One of the designers, Prof Robert Langer from the Massachusetts Institute of Technology (MIT), claimed the programmable nature of the device opened up fascinating new avenues for medicine.

'You could literally have a pharmacy on a chip,' he said. 'This study used the device for the treatment of osteoporosis. However, there are many other applications where this type of microchip approach could improve treatment outcomes for patients, such as multiple sclerosis, vaccine delivery, for cancer treatment and for pain management.'

The work is described as the first in-human testing of a wirelessly controlled drug delivery microchip. The technology at its core has been in development for more than 15 years.

Programmed to dose
It sees the fingernail-sized chip connected to an array of tiny, individually sealed wells of a drug product - in this case, a parathyroid hormone, teriparatide, which is used to counter bone density loss. Fully packaged, the device is about the size of a heart pacemaker.

'Like other medical implants, it's made out of biocompatible materials. It has a housing with the electronics on the inside, together with the microchips that contain the discrete doses of the hormone.'

The drug wells are capped by a thin membrane of platinum and titanium. A dose can only get out when a well membrane is broken, which is achieved through the application of a small electrical current.

The chip controls the timing, and because it is programmable, the dosages can be scheduled in advance or - as in the newly reported study - triggered remotely by a radio signal.

'When the microprocessor decides to pass current through a particular membrane, that membrane decomposes in about 25 microseconds,' colleague Prof Michael Cima told BBC News.

'The drug is then available for pick up in the capillaries that surround the device to go into the bloodstream.'

The device was tested on seven women between ages of 65 and 70 from Denmark. In their paper, the scientists report that the implant delivered the drug teriparatide just as effectively as the injections pens that often used to administer such treatment, and that there were indications of improved bone formation (although drug efficacy was not formally assessed in the trial). Critically, no side effects were noticed.

The innovation started out as a research project in MIT but is now being developed by a spin-off company, Microchips Inc.

The firm is trying to scale up the system so that more doses can be included. In the trial, only 20 wells were present. Microchips Inc believes drug delivery devices containing hundreds of wells are possible.

However, the team acknowledges that a marketable product is still at least five years away.

'Clinical promise'
Commenting on the research, John Watson, a professor of bioengineering at the University of California, San Diego, listed areas where improvements would be needed.

'In the study, the device failed in one patient (an 8th patient, not included in their analysis), and the manufacturing process yielded only one device with all 20 reservoirs of drug,' he said.

'Nevertheless, all doses present were released from the seven devices. Several years are still needed to bring this technology to approval by the US Food and Drug Administration (FDA) and to the clinical promise reflected in this small study.'

Automated drug delivery systems are likely to prove popular with patients who currently have a daily regimen of self-administered injections. Julia Thomson, a nurse with the UK's National Osteoporosis Society, said such innovations could improve compliance among patients, some of whom will stop injecting because of the hassle.

'These implants form a new and novel approach to the way in which parathyroid hormone is administered, and although it was a very small study, the findings are certainly exciting,' she said.

'The downside with parathyroid hormone has always been that women have to inject themselves on a daily basis so a new implant, like this, would certainly address compliance issues.'

Ultimately, say the Massachusetts researchers, one could envisage sensors being combined with chips that hold reservoirs of different kinds of drugs, creating a system which could adapt treatments in response to changing conditions in a patient's body.