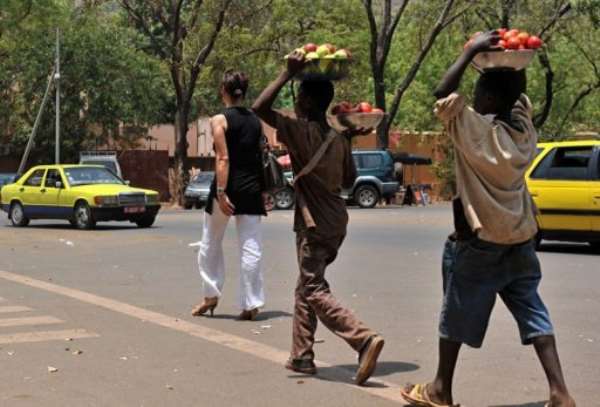 DAKAR (AFP) - West African leaders slapped Mali's junta with crippling sanctions on Monday as the UN called for urgent talks on the country where half the territory has fallen to rebels and Islamist fighters.

As Mali slid into chaos under military rulers who have lost more than half its territory to insurgents since seizing power on March 22, France called for an emergency meeting of the Security Council on Tuesday.

Meanwhile the 15-nation Economic Community of West African States (ECOWAS) tightened the stranglehold on the junta in a bid to force it to give up power.

"All diplomatic, economic, financial measures and others are applicable from today (Monday) and will not be lifted until the reestablishment of constitutional order," said the chairman of the 15-nation regional bloc, Ivory Coast President Alassane Ouattara.

Non-ECOWAS members Mauritania and Algeria who border Mali to the north and west were at the emergency summit in Dakar and will also implement the embargo.

The vast landlocked country depends heavily on the import of fuel and basic goods from surrounding nations and the embargo will also cut the putschists off from the central bank in Dakar, affecting the junta's ability to pay public wages.

The bloc will also put in place a military standby force, after earlier putting some 2,000 regional troops on alert, Ouattara said, calling the situation in Mali "extremely serious."

Ouattara said that declarations by the junta on Sunday that it would restore the consitution it had suspended immediately after its overthrow of President Amadou Toumani Toure and its promise not to stand in new polls were not enough.

"The junta's declarations go in the right direction, but they must be effective, the junta must distance itself and hand power over to recognised constitutional authorities," said Ouattara.

As the situation deteriorated both France, the former colonial power, and Belgium urged their citizens to leave the country.

France said that was "no question" of sending troops and expressed concern over the role of Islamist groups in the rebellion.

A band of low-ranking officers ousted the government on March 22 over its alleged failure to take action on the rekindled Tuareg insurgency.

However the power vacuum played into the hands of the insurgents -- a motley crew of Tuareg separatists and radical Islamists -- who have captured key towns in the vast arid north virtually unopposed.

As Kidal, Gao and then the ancient city of Timbuktu fell in the past three days the bow-tie shaped nation was split in two by the Tuareg/Islamist juggernaut.

On Monday witnesses reported that Islamist fighters chased the Tuareg rebels out of Timbuktu a day after both groups swept into the fabled city.

Though they have been fighting side by side over the past several months, the two groups have very different objectives in an offensive aided by heavy weapons brought back by Tuaregs from Libya, where they had been employed by slain dictator Moamer Kadhafi.

The main Tuareg rebel group MNLA (Azawad National Liberation Movement) seeks the independence of northern Mali which it considers the Tuareg homeland that it calls Azawad. The Islamist Ansar Dine wants to implement Sharia law in the mostly Muslim, but secular state.

The latter is under the command of Iyad Ag Ghaly, who played key roles in the two previous Tuareg rebellions in the 1990s and 2007-9. He has since taken up the Islamist cause, distancing himself from the Tuareg national cause and developing links with the Al-Qaeda in the Islamic Maghreb (AQIM).

"Iyad (Ag Ghaly) came this morning with about 50 cars. They took the city, chased away the people from MNLA (Azawad National Liberation Movement) who were there, burned the MNLA flag and put their own flag up at the military camp," said cameraman Moussa Haidara who filmed events.

Mauritanian news agency Al-Akhbar said the north African Al-Qaeda branch was also present in Timbuktu - once a renowned intellectual and religious centre helping to spread Islam throughout Africa and a fabled trading hub.

One of the leaders of Al-Qaeda in the Islamic Maghreb (AQIM) "Yahya Abou Al-Hammam entered the town and made the former army headquarters his base," the news agency reported.

The swift rebel advance in the north sparked panic further south as some citizens saw soldiers fleeing their posts and followed suit.

More than 200,000 people have been forced from their homes by the fighting and aid groups have warned that the combination of civil war and drought could lead to one of the continent's worst humanitarian emergencies.