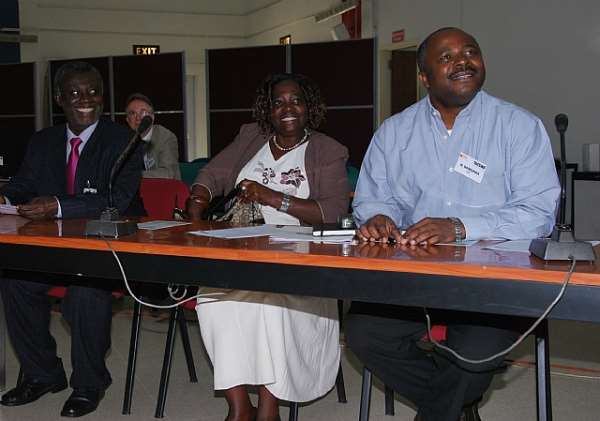 In one of the most ambitious efforts ever undertaken on behalf of an orphan crop like yam, the International Institute of Tropical Agriculture (IITA) and a host of partners announced today a landmark new initiative to dramatically boost yam productivity and double the incomes of three million yam farmers in West Africa.

The Yam Improvement for Income and Food Security in West Africa (YIIFSWA) project, which is supported by a US$12 million grant from the Bill & Melinda Gates Foundation, will be led by IITA in collaboration with the governments of Ghana and Nigeria, the UK's Natural Resources Institute (NRI), the Alliance for a Green Revolution in Africa (AGRA), and Catholic Relief Services (CRS). The YIIFSWA project will focus on increasing yields through better seed tuber supply and improving markets for this underground, edible tuber—some of which are as small as a fist, others as tall as a man.

Yams were first domesticated by African farmers 7,000 years ago. Today, 48.1 million tons of yams are produced annually across 4.4 million hectares of land in West Africa's “Yam Belt”—which extends from Cote D'Ivoire to Nigeria, representing over 90 percent of the global production.

Yams provide the most important source of dietary calories in Nigeria and Ghana. And for many people in the region, they rank above meat as a source of protein.

Yams are deeply tied to the lives, livelihoods and cultures in West Africa and among Africans in diasporas, yet their fate hangs in the balance as a variety of pests and diseases have now depressed yields to a mere 14 percent of potential harvests. But yam scientists at IITA and the national researchers are already developing a host of new yam varieties that can address these challenges and are confident that with additional investments, there is tremendous potential to rapidly boost production and income from yam.

“Right now, most farmers cultivate yams mainly for household consumption, but if we can increase yields, while also improving marketing conditions, then many of these farmers should be able to earn a steady income from growing yams,” said IITA's Director General Dr. Nteranya Sanginga. “Yam prices have been rising in recent years because there is a strong demand for the crop in Africa, and even in places like Europe and the United States, where rapidly growing West African immigrant communities still have a big appetite for their traditionally preferred staple.”

The YIIFSWA project is an ambitious, multifaceted five-year effort with a vision of doubling the incomes of three million small-holder farming families. The initial focus of the project is on 200,000 smallholder farm families in Ghana and Nigeria—90 percent of whom cultivate less than two acres. A key priority is to ensure that affordable pest- and disease-free seed yams are available to farmers, along with storage and handling technologies that can reduce post-harvest loss. Yam breeders will develop and widely disseminate new, higher-yielding, disease-resistant varieties. The private sector partners are expected to play a key role by providing certified seed and working closely with efforts to link small-holder farmers, particularly those in remote areas, to markets where a strong and steady demand for yams should allow them to realize the economic benefits of increased productivity. This will be coordinated by AGRA's Farmer Organization Support Centre in Africa (FOSCA) program.

Indigenous crops like yams often are referred to as orphan crops because, even though they are vital staples for millions of people in West Africa, little is invested in improving yields, compared to major global “commodity” crops like maize, wheat and rice. As a result, yam yields fall below potential. However, as an indigenous crop, yams are better adapted to soil and climate conditions in the region than some commodity crops, and are already well-established in local diets. These factors mean successful efforts to boost yields are likely to be more sustainable and have a greater impact on food security by enhancing the preferred crop staple with good untapped potentials. According to IITA studies in Nigeria, yam cultivation remains a lucrative enterprise. It was found that, with a potential rate of return of 78 percent, each dollar invested in yam research generates US$52 worth of additional food for the poor, relative to US$124 for all households.

For example, creating an abundance of a locally produced nutritious staple like yams can provide insurance against crises sparked by a sudden, sharp rise in global food prices.

A Critical Time for Yam Production

The new yam improvement project is coming at a critical time for farmers and consumers in the region. Over the last decade, yam productivity per hectare has been stagnant or declining in the Yam Belt due to a number of factors. Researchers warn that this trend, coming in the midst of rapid population growth, could be “catastrophic” for the region without efforts to revive the crop.

Today, yam production is under assault from fungal diseases, such as anthracnose that literally turns a field black, along with the yam beetle, nematodes, plant viruses, declining soil fertility and stresses caused by climate change. Post-harvest diseases such as tuber rot can by themselves claim up to 40 percent of a crop. The cost of seed tubers is one-third of the total cost of producing ware tubers for food. Seed tubers claim about 30 percent of the annual harvest.

When these types of problems occur in mainstream crops like maize, rice or wheat, there is a vast global network of plant breeders available to develop new crop varieties that can withstand such stresses. But today in West Africa there are fewer than six yam breeders and fewer than 50 other researchers across the ECOWAS region. And despite yam's importance and high commercial value, its relative obscurity (Africa accounts for about 93 percent of global yam production) has limited both the level of breeding and efforts to preserve its diversity.

IITA hosts the world's largest collection of yam varieties. In 2010, it partnered with the Global Crop Diversity Trust and national researchers in the region in an effort to collect yams grown by farmers, some of whom still routinely domesticate wild tubers from the forests of Benin and Nigeria. At least 5 percent of yam germplasm is lost yearly, but new techniques needed required more funds. Of the six food crops in IITA's mandate, only yam and cowpea originated from Nigeria and need to be zealously conserved so as not to lose this heritage nature has bestowed upon the country.

From this growing diversity, IITA scientists and the National Agricultural Research Systems (NARS) partners are developing new, high-yielding, disease- and pest-resistant yam varieties. Already, IITA has developed new varieties that yield 50 to 100 percent more than existing varieties. Among these improved yam varieties, 19 were officially released in Nigeria and are yet to be massively multiplied for distribution to growers. Farmers in Southern Nigeria, who like others in the region celebrate yams with elaborate and colorful annual festivals, have dubbed one of these varieties “the Wonder Yam” due to its resistance to yam mosaic virus and yam badnavirus.

So revered is the yam crop—Nigerian novelist Chinua Achebe calls it “the king of crops”—that in Cote d'Ivoire, funerals and burials are sometimes postponed until after the local yam festival has been observed. Even some of the cruel overlords of trans-Atlantic slave ships spoke of the importance of provisioning their vessels with large quantities of yams for the voyage to the New World because of their much longer storage than most other fresh root crops. Actually, there is no relation to the sweet potato that Americans call “yams,” and the dryer, grainier “true Yam.”

Cultivating Success in Both the Field and the Markets

A key goal of the IITA yam project is to improve not just yield and outputs in the field but also to enhance market access for smallholder farmers. Though smallholder farmers cultivate the majority of yams in the region, IITA research findings show that those benefiting from the domestic, regional and global market for yams are mainly medium to large-scale producers. IITA and the local partners believe that a combination of higher yields in the fields, reduced production costs through improved seed tuber supply, and better market access for smallholder growers will not only improve incomes for farmers, but also increase the affordability and consumption of yams in both rural and urban areas.

IITA officials note that work by the United Kingdom's Department for International Development (DFID) (a long-time partner to IITA's yam research), has shown that there is a significant potential for YIIFSWA to attract private sector investment in the production of certified yam seed that are clean, healthy, available and much more affordable.

For example, in different parts of Nigeria, anywhere from 66 to 97 percent of households desire to eat yams on a weekly basis. Yet, according to IITA, the domestic price of yams is well above the reach of many such consumers, whose low income make them only able to afford to buy slices rather than whole tubers.

“Yams are a very important crop to smallholder farmers in Africa, and if these farmers can grow more, and have better access to markets, it can make a real difference in their lives,” said Dr. Regina Kapinga, a program officer for the Agricultural Development initiative at the Bill & Melinda Gates Foundation. “Women will be actively engaged in this project, in part because they play an important role in yam production and marketing. We want to reach a stage where robust yam seed production techniques will use parts of the yam plant other than tubers, thereby releasing an additional 30 percent of the crop to food ware tubers.”

In addition, there are lucrative export opportunities to meet the demand of West Africans living abroad. Nigeria, for example, exported US$27.7 million worth of yams to the USA in 2011. 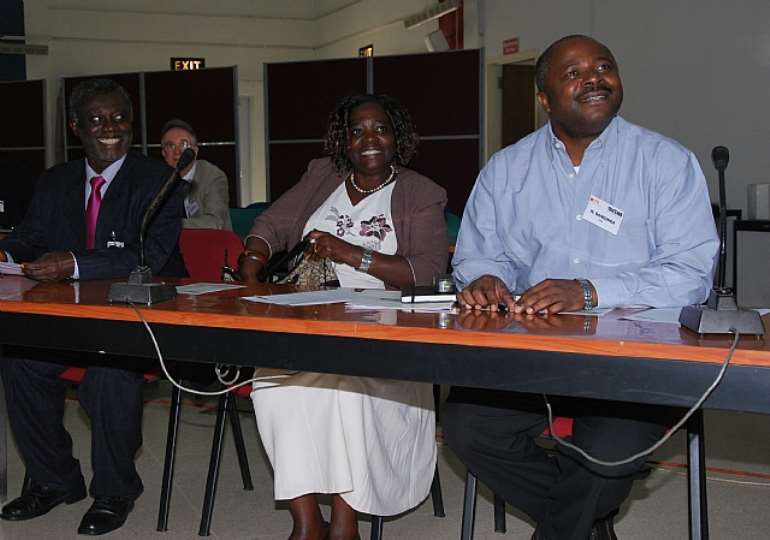