The Positives of Bawumia's Negatives. 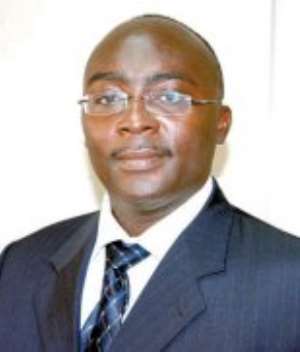 Even on the day of Bawumia's nomination, Minority Leader, K.Mensah Bonsu was reported to have said that he and many of his colleague MPs had preferred a different candidate. Leading up to the announcement, it was also widely reported in the media that council of elders, party conservatives and some key powerful interest groups all had different ideas. So one could imagine the kind of pressure Nana was under. But Nana stood his grounds and in so doing exhibited the three most important traits identified by philosophers as marks of a true leader: consistency, single mindedness and the absolute confidence in decision making, against all odds.

This kind of decision making, the philosophers say, comes with absolute responsibility rooted in the unwavering belief in one's vision, which in turn, breeds absolute confidence. Thus it came as no surprise when Nana's decision was upheld unanimously by all stakeholders regardless of all reservations; an indication of the confidence and believe in Nana's leadership.

BAWUMIA'S ECONOMY
Nana however did not pick Bawumia due to intransigence or out of a vacuum. As party chairman J.O Lamptey laid it out in the post- nomination press conference, the most important factor taken into account was the management and transformation of the economy. Rarely does a specific expertise outweigh all other historical considerations in the picking of a running mate. As the safest bet, running mates are usually picked-after all basic considerations- based on their appeal to attract the traditional voter- that is, geographic, cultural and socio-political factors.

However, candidates, in crucial times in history, have bravely gone against this norm due to the specific needs among all need of the times. In more recent times, Barack Obama, with his “handicap,” for example, picked Biden for his foreign policy expertise as against the traditional factors and sure bets like a “southern candidate;” or even the most popular at the time, the “gender” candidate. The greatest concern then – and now- was the International scene in spite of the record recession. Thus by picking Biden, he signaled to all citizens across all traditional lines that their number one concern was his main concern. And it paid of big time. Obama didn't have to go through the same kind of internal pressure as Nana, however.

Right now, the shylocks at the WB/IMF say our economy is supposedly one of the fastest growing in the world. Cheered on by the inept Mills government, they also say Inflation is at historic single digits. With the status of an oil producing country and backed by record prices for commodities, all the signs point to a potential take off into the spheres of “BRIC.” But due to the lack of imagination of Mills and his team, these figures continue to hang in the air awaiting the “breath of life.” And without an active and specific economic policy, these record numbers would never translate into an actuality thereby benefitting the average Ghanaian.

Evidently, what the country needs at this juncture is an economic team not only with fresh ideas but also directly in charge of this important sector and answerable only to the president. The VP, by virtue of his office, is also the head of the nation's economic team. Thus Bawumia, like Biden, is a clear signal as to the direction, focus and commitment of Nana. Non-technocratic VP may not have been a necessasity in the past but now it is.

BAWUMIA'S VISION.
The first time around, Bawumia was picked four months before elections. As a result he didn't have enough time to share with citizens his specific economic views that would have been brought to complement Nana's vision. Dr. Bawumia has since written a book hailed by critics as the first of its kind on Ghana's monetary policy. Titled “Monetary Policy and Financial Sector Reforms in Africa: Ghana's experience,” and published in 2010, the book traces the monetary history of Ghana since 1957 and offers certain key recommendations going forward.

“In the book, I ask for a fiscal responsibility act, especially in the context of the recent oil discoveries in Ghana. We need better control over our fiscal goals, in the long term,” pointed out Bawumia in an interview with Centralbanking.com shortly after the book's release. As Bawumia further explained, earlier reforms had rendered the Central Bank virtually independent but fiscal responsibility was still needed to “entrench macroeconomic stability.”

And as a technocrat at the Central Bank who, over the years, stood on the sidelines as politics dictated for economics, his nomination in 2008 was meant to change the tide. As he said in the interview, “I expected, had we won, that I would have been able to drive policy in accordance with what is good for the economy, rather than have economic policy be driven by political imperatives.” The expectations are still the same and with his position as an executive VP, he would indeed be in the best position to drive economic policy better than any other person or portfolio. And that is exactly what the country needs,… a technocrat with his own specific sets of ideals for the country.

BAWUMIA'S VOTES
The critics' biggest worry, as well as the “elation” of the opposition had to do with Bawumia's supposed inability to attract traditional votes after all things are considered. But it is obvious that Nana is most worried about the economy. And it is also obvious that Nana did not pick Bawumia for traditional votes but for “economic” votes. No doubt, this is a first, a novelty that would come as refreshing news to the “new age” voter.

Accordingly, Bawumia would attract the non-traditional voter; the “cerebral” voter, the voter disenchanted with our non issue based politics, the middle class voter, the floating voter, the voter yearning for technocratic influence in our polity, the voter tired with the old politics. Most important, the educated voter who understands the value of the economy as the single most important factor. These are all non-quantifiable, non-categorized voters , unrestricted by traditional boundaries and thus cut across aboard. In short, Bawumia 'd appeal to the conscious and “discerning” voters whose numbers continue to rise as democracy becomes more entrenched.

In 2008, time was unkind to Bawumia. Relatively unknown, four months were simply too short a time for him to make any significant impact. Nonetheless, his instant appeal among non-traditional voters, within that short period, was able to help Nana win the first round.

This time around, not only is he already well known. The added advantage is the amount of time left for the nation to really get acquainted with Bawumia. The added bonus is the inroads he would make among traditional voters given the time. In the final analysis, TIME is on our side.

So what are Dr.Bawumia's negatives? Only one, in my opinion: his days at IMF as a research economist. I pray that when given the nod, he would not develop a soft heart for the draconian policies of his former employers.