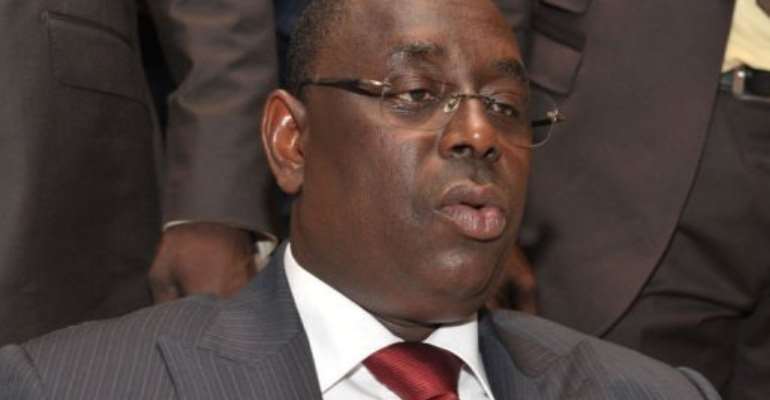 Sall swore to "observe and enforce the constitution" at a ceremony in the gardens of a large hotel in Dakar. By Seyllou (AFP/File)

DAKAR (AFP) - Macky Sall, who was sworn in as Senegal's president Monday, is a stolid 50-year-old geologist once tipped as Abdoulaye Wade's designated heir who defeated his former mentor at the polls.

Sall took the oath in front of several foreign heads of state to become the latest occupant of the presidential palace from where Wade had called him a few hours after polls closed to congratulate him.

While Wade spent 25 years as an opposition leader before finally winning the presidency, Sall won the country's top political prize on his first attempt.

There was a time when Sall was widely tipped to get there under Wade's patronage: many observers thought he was being groomed to succeed the veteran leader.

But after a spectacular rise during which he occupied several ministerial portfolios before becoming prime minister, he fell from grace, quit the party and struck out on his own.

In a first round of voting on February 26, Sall came second to Wade but prevented him from winning outright and forced the incumbent into a run-off.

Between the two rounds Sall won the backing of his former rivals, for more than anything, the opposition wanted the 85-year-old president out of office.

Sall was born in the western city of Fatick to a civil servant father and a mother who sold groundnuts.

He graduated from Dakar's Cheikh Anta Diop University with a degree in geology, before heading to France to further his education in the field.

His father was a dedicated member of the Socialist Party which had been in power since independence, but Sall says he quickly became disgusted with its misrule, joining the opposition in 1983.

Sall was at Wade's side when he finally unseated the Socialists in the 2000 elections. A year later, the new president appointed him mining minister.

In 2003 he became minister for territorial administration and government spokesman before taking up the office of prime minister a year later.

Sall managed his mentor's election campaign in 2007, but lost his spot as prime minister in the cabinet shortly afterward, though he went on to be elected speaker of the National Assembly.

It was here that he would make what he says on his website was seen as a "heavy political mistake": he failed to inform Wade that parliament was summoning his son Karim for questioning.

Karim Wade, the head of a national agency carrying out massive infrastructure projects ahead of a summit of the Organisation of the Islamic Conference, faced allegations of improper financing.

Sall paid dearly for his mistake.

Lawmakers promptly drew up a law reducing the mandate of the national assembly speaker from five years to one, prompting him to resign.

He went on to create his liberal Republican Alliance, under which he was elected mayor of Fatick in 2009 -- a year the opposition claimed several large towns in legislative polls as dissatisfaction with Wade grew.

A tall, plump man, the father of three is nicknamed "Niangal" in the local Wolof language, referring to his closed, austere expression, while he comes across as naive.

But his entourage says appearances are deceiving.

"He is not as docile as he seems," said El Hadji Wack Ly, a lawmaker with Wade's Senegalese Democratic Party.

"He is a firm man who keeps his word."

In an interview with AFP before the March 25 presidential run-off, Sall -- who chose the horse as his party symbol -- said that "several emergencies" loomed.

These include a "dramatic public finance situation" as well as a food crisis in the north where some 800,000 Senegalese are going hungry due to a drought gripping the Sahel.

Sall wants to halve the size of the government -- a cut of some 20 ministers -- reduce Senegal's diplomatic representation abroad and use the savings to lower the prices of basic goods.

After years of complaints over mismanagement of public finances, observers have said Wade fears he or members of his family could face prosecution if they ever lose power.

"Senegal is a democracy after all, with rules and laws," said Sall.