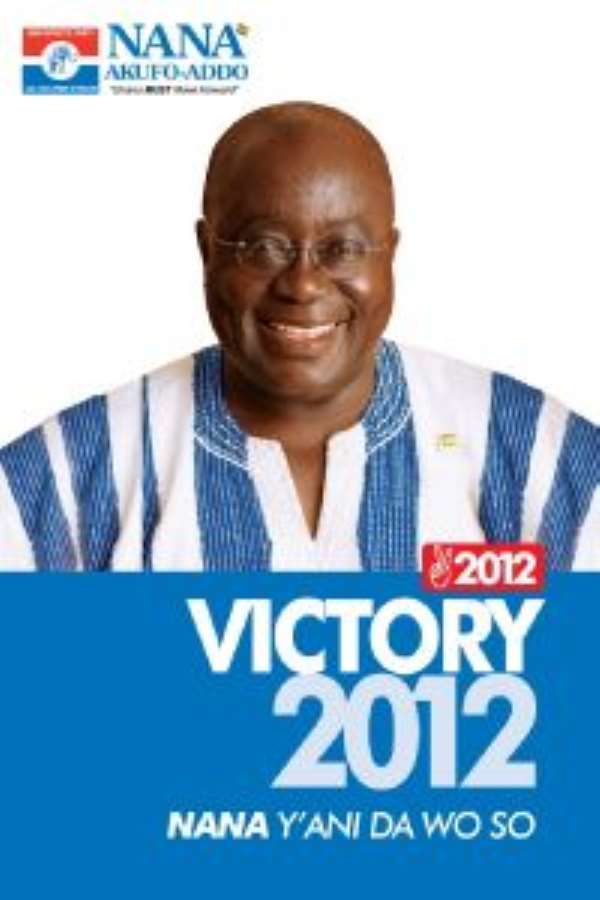 A former Ashanti regional chairman of the New Patriotic Party, Robert Owusu Amankwah says with the dust now settled on the choice of Dr Mahamudu Bawumia as Nana Akufo Addo's running mate for the 2012 general elections, the road to victory for the party in December polls is now clear.

He said what the party now needed is an effective and an all-inclusive campaign that would also ensure constant synergy between the grassroots and the main party campaign machinery.

“We must also make sure that no issue is belittled as the party braces itself to cause the much anticipated defeat of the ruling NDC, come December 7th” Robert Amankwah said in an exclusive interview with the New Statesman on Saturday.

The party guru stated that he was inspired by the overwhelming and massive unanimous endorsement of Dr Bawumia by the National Council of the party, an indication that the party was ready and prepared to work in harmony for the much anticipated victory of the party in the December elections.

He asserted that “all is now set for the winning team to strike with Nana Addo and Bawumia leading the pack”, adding “we are solidly behind them in their solemn quest to salvage the country from the clutches of the myopic, insensitive, and inept NDC administration.”

Chairman Amankwah was however happy for the consistency that Nana Addo had exhibited by retaining his 2008 running-mate, noting that Dr Mahamudu Bawumia still remains the perfect running-mate for the party “because he fits well into the party and Nana Addo's vision for economic transformation of the country.”

According to the former party chairman, looking at the current economic situation of Ghana, the choice of the Dr Bawumia has indeed reignited absolute hope among Ghanaians that “there will be brighter days ahead under the presidency of Nana Addo Dankwa Akufo-Addo and Dr Mahamudu Bawumia”

In the view of the NPP man, it did not come to him as a surprise when Bawumia said “his nomination is meaningless unless it is linked to the total economic transformation of Ghana” because to him, “Bawumia knows everything about the economy of this country”

Mr Amankwah noted that “this is the man whose instrumentality and agility helped ex-President Kufour achieve sustained economic stability, leading to the stability of the nation's currency and its subsequent redenomination in 2007”

In the view of Robert Amankwah the time has come for African countries and other developing nations including Ghana to strive for leaders with proven high economic credentials to help fast track the economic improvement of their countries.

He said with the right attitude, the vice president-in-waiting would help Nana Addo fulfill his promise of economic emancipation of Ghanaians who have been disappointed by the “corrupt-infested and mediocrity NDC government.”

The NPP big-wig said as things seem bleak as a result of the poor showing of the government in the past three and half years, Ghana needs peace and good leadership 'and the pair of Nana-Bawumia represents the peace and hope that Ghana requires to transform her socio-political and economic landscape.