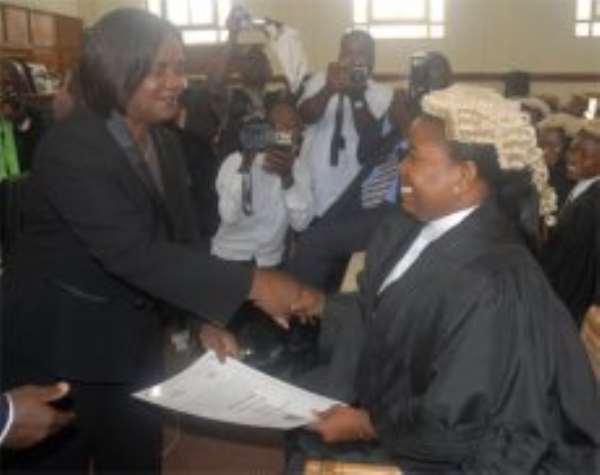 The Chief Justice, Mrs Georgina Theodora Wood, has advised young lawyers to eschew greed and avarice in their professional pursuits.

Instead, she urged them to imbibe integrity as the hallmark of their professional practice, and, in all things, seek to further the aims of justice.

“As lawyers, you must keep a relationship which is cordial, gentle, honest, diligent, respectful and dignifying in all respects,” she remarked.

Addressing 23 new lawyers who were enrolled and called to the Bar in Accra Friday, Mrs Justice Wood said the lawyers were joining the profession at a time when the values of the profession had been called into question.

“It is, therefore, imperative that you eschew avarice because it is at the heart of many of the problems bedevilling professional ethics; not only the profession, but I daresay the entire nation,” she noted.

The Chief Justice said she believed greed and avarice had undermined and continued to undermine national efforts at achieving sustainable economic growth, which was a catalyst for real improvement in the quality of life of the people.

She advised the new lawyers not to use the knowledge and skills they had acquired for selfish gains but be honest and hardworking, pointing out that “God does, in His own ways, reward and honour the honest and diligent worker”.

“There is, therefore, absolutely no need to cut corners or give in to the wiles of clients who come bearing offers that can only be described as ‘Trojan horses’. Such ill-gotten wealth will only come back to cause irreparable damage to your reputation,” she cautioned.

Mrs Justice Wood noted some emerging challenges in legal training as the number of law schools and applicants seeking admission to the Ghana School of Law (GSL) increased, while some new endeavours, such as the oil industry, requiring legal attention also surfaced.

She said as a regulatory body, the General Legal Council (GLC) had set in motion systems and processes designed to balance the virtue of liberalisation with the necessity of maintaining standards.

The Chief Justice spoke about proposed reforms at the GSL, beginning from the 2012/2013 academic year, as some of the measures to address some of the challenges.

She said the GLC was in the process of reviewing the curriculum at the GSL with the view to improving the quality of training.

The 23 newly enrolled lawyers included a physically-challenged lady who had to surmount the odds of physical disability to undergo legal training and enable her to pursue a dream career.

Ms Esther Akua Gyamfi was paralysed by poliomyelitis at age two, and that marked the beginning of a life-time battle against the negative trappings of physical disability.

Initially, she was denied primary education because schools in Kumasi where she lived with her parents declined to enrol her on the basis of her disability.

But through the support of her mother, Evangelist Mrs Mary Armoo Gyamfi, who taught her at home, she managed to overcome the denial of formal primary education.

Ms Gyamfi said her mother inculcated a strong spirit in her that nothing was impossible in the world, and that spirit motivated her to overcome the disable-unfriendly environment of the GSL as she rode in a wheelchair and climbed long stairs for two years to attend lectures.

The lawyer with disability was deeply emotional as she recounted her experience to the Daily Graphic, but the broad smile she wore when the Chief Justice broke protocol by descending from the dais to present a certificate to her, was a clear testimony that Lawyer Esther Akua Gyamfi’s sacrifices and perseverance had paid off.

JUST IN: Mahama lawyers file another motion to compel EC to ...
47 minutes ago