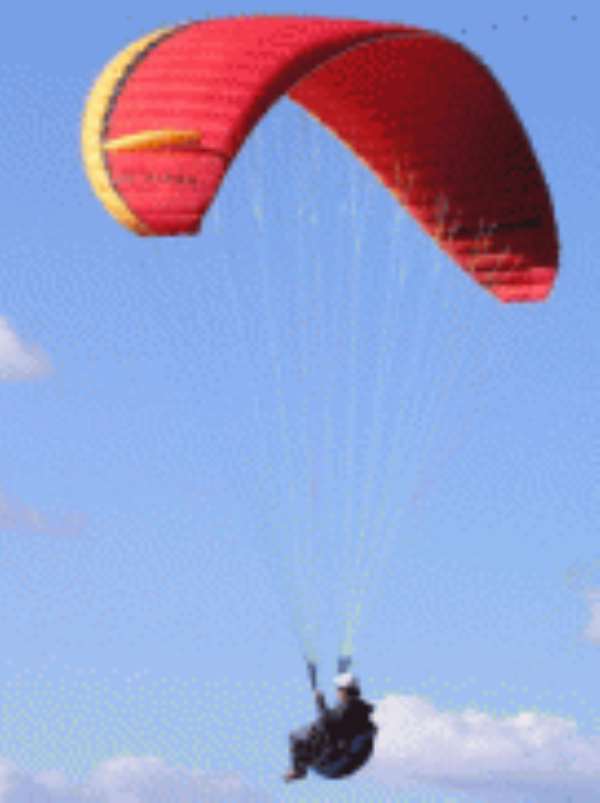 Twenty-one pilots from the United States of America, Norway, France, Brazil, Japan, South Africa and Australia have confirmed their participation in this Easter Paragliding festival on the Atibie Kwahu Mountains in the Eastern Region.

Under the auspices of the Ghana Tourism Authority (GTA), this year’s Kwahu Easter Paragliding Festival slated for April 6, 2012 to April 8, 2012 is expected to be more exciting than the previous ones, given the mouthwatering pack of entertainment events on the bill.

An innovation at this year’s festival is a four-day hiking expedition starting from the Atibie Mountains through the Kwahu Ridge to Nkyenekyene.

Equipped with maps, compasses and other communication aids, the hikers will undertake an 89-kilometre endurance walk in four days with the winner taking home a cash prize of GHc2,000.

GTA officials say already, more than 200 people have subscribed to the hiking expedition, which is a collaboration between the GTA and Brave Heart Expedition, acclaimed as the best expedition organisation in West Africa.

Another side attraction is a football match between Kumasi King Faisal and Okwahu United Football Club, the pride of Kwahuman.

Dubbed “Kwahu Paragliding 2012’’, the euphoria is expected to be explosive with the theme song “Lapaz Toyota’’, the current hit song by hiplife artiste Guru, a good reason to attract a large number of national and international patrons to the Kwahu Mountains to savour the Kwahu Easter extravaganza.

At the launch of the festival in Accra on Wednesday, Tourism Minister, Ms Akua Sena Dansua, said adequate security measures had been put in place to ensure a smooth organisation of the event.

She invited all Ghanaians and Easter holiday revellers to troop to the Kwahu Mountains for the festival, assuring them of great fun and wonderful experiences.

Ms Dansua said the paragliding festival fell within the scope of her ministry’s mission to promote domestic tourism, adding that it would provide all the needed support to achieve that mission.

She appealed to road users, especially those who would be heading to the Kwahu Mountains for the paragliding festival, to be extremely cautious in order to avoid road accidents.

It is normally characterised by a plethora of entertainment, music and dancing, greatly enhancing domestic tourism as it encourages more Ghanaians to show interest in the tourism potentials of the country.

Since its inception in 2005, the Kwahu Easter Paragliding Festival has attracted thousands of Ghanaians from all walks of life and foreigners alike.