With parliament in the bag, Egypt Islamists eye presidency 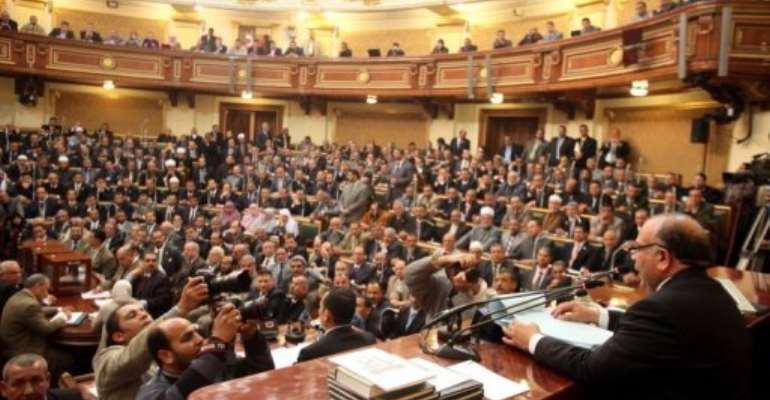 Speaker of the Egyptian parliament, Saad al-Katatni of the Muslim Brotherhood, addresses the parliament. By Khaled Elfiqi (AFP/POOL/File)

CAIRO (AFP) - Egypt's Muslim Brotherhood, which already controls parliament, is now eyeing the presidency as it seeks to consolidate its newfound power, but the move risks backfiring, analysts say.

The Islamist movement announced on Saturday that it would nominate its deputy leader, Khairat al-Shater -- a business tycoon and the group's main financier-- to run for the country's top job.

The announcement sent shockwaves through political circles, just two months before the first presidential elections since a popular uprising toppled Hosni Mubarak last year. The election kicks off on May 23.

"The Brotherhood is trying to take all the tools in the country, it is not surprising that they field a candidate," said Mustafa Kamel al-Sayyed, a professor of political science at Cairo University.

"Since they won the parliamentary elections, one can expect them to make the same effort for the presidency and that their candidate stands a good chance of making it to the second round," he told AFP.

But for political analyst Hassan Nafea, the battle will be tough for the Brotherhood, whose intentions to consolidate power can prove "very dangerous and lead to a polarisation."

For months, the Muslim Brotherhood have said they would endorse a consensus candidate, compatible with their ideas but not affiliated to their group, in order to mitigate fears it was trying to monopolise power.

But their sudden U-turn and the decision to nominate Shater sparked heated arguments within the organisation, even before the public announcement.

Shater has been jailed several times, most recently in 2006 when a military court sentenced him to seven years for terrorism and money laundering, after his assets were frozen.

He was released last March, just a month after Mubarak was toppled.

The Muslim Brotherhood's lawyer Abdel Moneim Abdel Maqsud told AFP that the military had rescinded Shater's conviction, which would have prevented him from running.

"The procedure's were finished last week to drop the sentences against him," he said.

Shater's nomination comes at a critical time, with the drafting of the constitution boycotted by liberals and leftists who accuse the Islamists of monopolising the process.

The panel tasked with writing the country's new charter, whose members were elected by legislators, is made up of nearly 60 percent Islamists from the Brotherhood's Freedom and Justice Party (FJP) and the more conservative Salafist Al-Nur party.

The Brotherhood has defended its decision to field one of its members, pointing to its frustration of seeing its efforts to have the current government sacked and replaced by an FJP-led cabinet ignored by the ruling military.

The current prime minister, Kamal al-Ganzuri, was minister under Mubarak and is accused by the Islamists of stalling the revolution.

"There is a real threat to the revolution and to the democratic process," said the Brotherhood's secretary general, Mahmud Hussein, at a news conference on Saturday, adding that some of the presidential hopefuls were members of the old regime.

Among them is former Arab League chief and ex-foreign minister Amr Mussa, as well as Ahmed Shafiq, the last prime minister under Mubarak.

According to media reports, former intelligence chief Omar Suleiman will also be vying for the presidency.

"By fielding a candidate despite promising not to do so, the Brotherhood find themselves in a difficult position," Nafea said.

"The revolution was not just about police brutality, it was also against the monopoly of the business elite," said Rabab al-Mahdi, a professor of political science at the American University in Cairo.

With Shater being a top organisational leader and also the movement's main financier, "the Muslim Brotherhood are making the same mistakes as the National Democratic Party," Mubarak's old party, Mahdi told AFP.

The Brotherhood "have a strong political machine but they have exhausted all their chances for a consensus candidate. Khairat al-Shater is their last resort," she said.