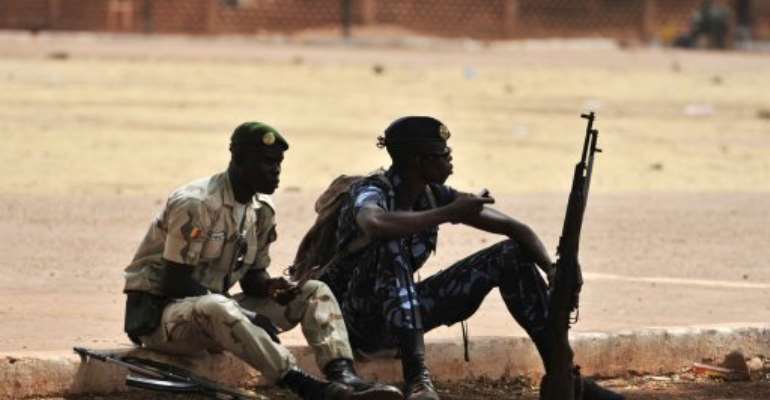 BAMAKO (AFP) - Tuareg rebels claimed control of the legendary desert town of Timbuktu on Sunday, part of a dramatic push across northern Mali, as the disorganised junta indicated it was ready to cede power.

Tuareg rebels assisted by Islamist fighters have swept across much of northern Mali since renegade soldiers staged a coup on March 22, saying they were fed up with the government's handling of a Tuareg fight for an independent homeland.

But since the coup, the army's position in the north has weakened dramatically and rebels have seized several towns, including Gao, which had served as army headquarters for the entire northern region.

Timbuktu -- a fabled trading hub synonymous with exotic isolation -- was the last major town in Mali's north not to have fallen into the hands of Tuareg rebels and Islamist fighters.

Announcing the "end of Malian occupation", the MNLA (Azawad National Liberation Movement) said in a statement it would ensure "order and administration."

On Sunday, witnesses told AFP they heard heavy weaponry blasting Timbuktu's military base, some 200 miles from Gao, but said the Malian army appeared to have deserted.

The apparent move follows army orders for soldiers in Gao to no longer resist rebels.

"Mali forces have decided not to prolong the fighting" around Gao because of the civilian population, coup leader Amadou Sanogo said.

"Yes, the rebels have arrived in Timbuktu", a resident told AFP by telephone. "As we speak, I see them going towards a bank in the city."

A young civilian died after he was struck by shrapnel, said Omar Haidara, director of a Timbuktu private school.

The town of about 50,000 residents is a United Nation's world heritage site, nicknamed the "pearl of the desert".

"The treasury, the banks, police stations, the office of the governorate and even the hospital have been pillaged," said the head of the local branch of a bank.

Mali's political situation is growing increasingly chaotic after the internationally condemned coup which led President Amadou Toumani Toure to flee. He is in hiding in the capital Bamako but has said he is safe.

On Sunday, coup leader Sanogo declared Mali's constitution "restored" and announced the reinstatement of state institutions, promising elections in which the junta would not take part.

The junta would engage in mediated talks that should lead to the creation of transitional bodies "to organise free, open and democratic elections in which we will not participate," Sanogo said without providing a timeline.

Sanogo told AFP on Sunday that the junta had sent envoys to the rebels to discuss a ceasefire.

"We have inherited ... a desperate situation, we're trying to make the best of it. We've already dispatched emissaries on the ground to try to obtain a ceasefire," he said.

Speaking in English to the US National Public Radio (NPR), Sanogo said: "What this army couldn't do in ten years, I can't do in ten days," but vowed to everything possible "to make this better."

The MNLA has relaunched a decades-old fight for the independence of what the Tuareg consider their homeland in the vast desert region.

It has been joined by the Islamist Ansar Dine (Defenders of Faith, in Arabic) which is headed by renowned Tuareg rebel Iyad Ag Ghaly and has ties to Al-Qaeda's north Africa branch, known as Al-Qaeda in the Islamic Maghreb.

Another Qaeda-related group, the Movement for Unity and Jihad in West Africa (Mujao), has said it too took part in the fight for Gao.

The MNLA's capabilities were boosted when fighters brought weapons into Mali from neighbouring Libya after the fall of Moamer Kadhafi.

The assault on Gao came less than 24 hours after the strategic town of Kidal, to the north, fell into rebel hands following an attack reportedly led by the MNLA and another Islamist group.

Following the coup, the European Union, the United States and other Western powers suspended hundreds of millions of dollars (euros) of support for landlocked Mali -- except for emergency aid to drought-hit regions.

Washington, which has warned the region was becoming a new hub for Al-Qaeda, on Friday supported regional African bloc ECOWAS's efforts to force the junta to step down.