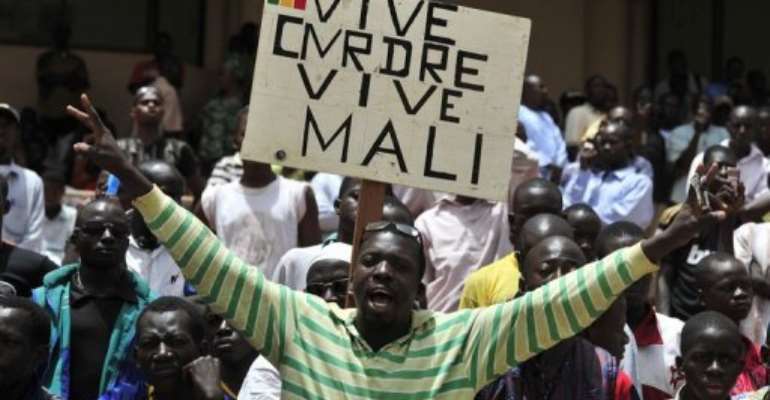 BAMAKO (AFP) - Mali junta head Captain Amadou Sanogo has ordered the army "not to prolong" fighting in a key northern town as rampant Toureg rebels tighten their grip over swathes of the north.

"Given the situation of the populations" near the battle zone "the Mali forces have decided not to prolong the fighting," Sanogo said late Saturday.

Just minutes earlier the leader of last week's coup had said, in a statement read by a journalist on state ORTM television, that the Malian army had fought off the Tuareg rebel assault.

Sources close to the junta recognised that the order to stop fighting was in fact a decision to pull the government forces out of the area, following similar withdrawals form other parts of the region in recent days.

Now most of the northeast of the country, with the notable exception of the garrison at Timbuktu, is under control of the Tuarag rebels and Islamist groups.

There were no available figures of the number of dead or injured in the fighting.

"A more viable security plan will be put in place so that the whole territory of Mali will not be violated," Sanogo said in his statement.

Heavy gunfire earlier rocked Gao as the rebels, reportedly backed by Islamists, pursued a relentless advance on an army struggling with the aftermath of a coup.

As the junta that seized power on March 22 tried to contain the rebel offensive, its envoys met in Burkina Faso with the West Africa bloc's mediator, President Blaise Compaore, and promised to work towards restoring constitutional order.

A resident of Gao, contacted from the capital Bamako, said the rebels were pushing to take the town, which serves as the military headquarters of northern Mali, 1,000 kilometres (620 miles) northeast of Bamako, with a population of about 90,000.

In a letter sent to an AFP correspondent in Bamako, an Islamist group called the Movement for Unity and Jihad in West Africa (Mujao) said it "attacked the city of Gao this morning".

The group is thought to be a breakaway faction of Al-Qaeda's north Africa branch, known as Al-Qaeda in the Islamic Maghreb (AQIM).

The assault came less than 24 hours after the strategic town of Kidal, north of Gao, fell into rebel hands following an attack reportedly led by Tuareg separatists from the Azawad National Liberation Movement (MNLA), fighting alongside another Islamist group.

With Mali threatening to unravel, the current chairman of the Economic Community of West African States (ECOWAS), Ivory Coast's President Alassane Ouattara, said the regional bloc had put 2,000 troops "on alert", ready to intervene if necessary.

Precise details on the various factions hammering Mali's army remain sketchy, but crucial to the offensive is the MNLA, a group boosted by weapons brought into Mali from neighbouring Libya following the fall of Moamer Kadhafi.

In January, the MNLA relaunched its decades-old fight for the independence of what the Tuareg consider their homeland in the vast desert region.

It has been joined by the Islamist Ansar Dine (Defenders of Faith, in Arabic) which is headed by renowned Tuareg rebel Iyad Ag Ghaly and has ties to AQIM.

The mutinous soldiers who overthrew President Amadou Toumani Toure argued that he had proved incompetent in facing the rebel offensive.

Even as it weighs sending military support, ECOWAS has threatened to hit Mali's junta with tough sanctions if constitutional order is not quickly restored.

Following a meeting Saturday with ECOWAS mediator Compaore in Ouagadougou, the junta's chief of staff, Colonel Moussa Sinko Coulibaly, said the putschists supported the bloc's call for a return to constitutional government.

"Now, the way to establish this, that is what we are going to discuss," he explained.

Burkina Faso's Foreign Minister Djibril Bassole then headed off to Bamako for talks with Sanogo.

"The conclusions were very good," the junta leader said after those talks.

The junta will make a clear analysis of the situation in the coming hours," Sanogo said, without giving details.

Sanogo on Friday said he needed outside help to beat back the rebels.

On the MNLA's website its spokesman Bakaye Ag Hamed Ahamed said the movement would continue its offensive, including targeting Timbuktu.

Following the coup the European Union, the United States and other Western powers suspended hundreds of millions of dollars of support for landlocked Mali -- except for emergency aid to drought-hit regions.

Washington, which has warned the region was becoming a new hub for Al-Qaeda, on Friday supported ECOWAS's efforts to force the junta to step down but said it was "very concerned" by the latest rebel advances.

Meanwhile, in Bamako on Saturday, more than 25,000 heeded a call from Christian and Muslim leaders to join a peace rally at a stadium in the capital.