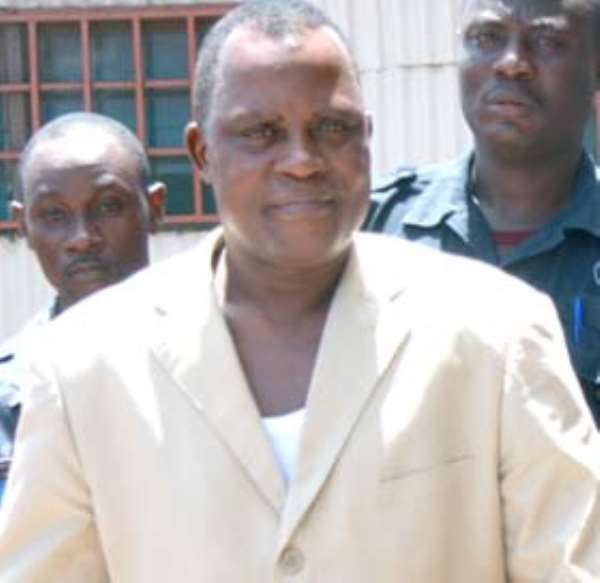 PROPHET NANA Kofi Yirenkyi, popularly called Jesus Onetouch, the founder and General Overseer of Jesus Blood Prophetic Ministry, who was jailed 10 years for allegedly defiling his 10-year-old biological daughter, was yesterday acquitted and discharged by an Accra High Court amidst tears of joy from family members, friends and well-wishers.

After standing the case down for about 30 minutes for the prosecutor who was not present throughout the ruling to appear, Justice Emmanuel K. Dzakpasu, the trial judge, acquitted Prophet Onetouch on two charges of defilement and incest, quashing his jail term.

The judge observed that there were 'huge doubts' created in the prosecution's case made against the prophet, upon which he was convicted.

Justice Dzakpasu, who delivered a judgment in an appeal filed by Onetouch challenging his conviction, indicated that it was insufficient for the Accra Circuit Court to consider the evidence of the victim only to put the man of God in jail.

According to the judge, it was obvious that the evidence of the victim's mother, her aunty and investigator were based on the narration of the victim and therefore was not enough grounds for conviction.

The judge observed there was a serious doubt created by prosecution and two doctors who conducted an examination on the victim as they had conflicting views of what might have caused the hymen of the 10-year-old victim to have broken.

Dr. Bedford Simon Sarfo, a gyaenacologist from Tetteh Quarshie Memorial Hospital, who first examined the victim, said the vulva was normal and it was the hymen which was torn and that it could result 99 percent from sexual intercourse.

However, Dr. Samuel Amu Mensah, a gynaecologist at the Police Hospital, refuted the claim that the hymen broke through sexual intercourse since all structures of the vagina, with the exception of the hymen, were intact.

He argued that a hymen could be broken accidentally when playing, or by the mothers who insert things into the vagina of their children.

Doctors' Reports
The evidence of Dr. Amu Mensah was that the penis of Jesus Onetouch could not have caused damage to his daughter's hymen.

Dr. Amu Mensah, in his evidence, had disagreed with the earlier medical doctor and stated that the damage to the hymen of the 10-year-old daughter could not have been through a sexual act.

The witness, an Assistant Commissioner of Police (ACP), said the object that could cause damage to the hymen could be the last finger of an adult.

According to him, when the victim was examined, the size of the vulva was 10 millimetres; therefore the object which could have caused the damage could be the last finger of an adult.

He said if damage to the hymen was even caused through sex, the size of the penis could be an under-sized one or that of another child.

The work of the prosecution, Justice Dzakpasu said, was to prove the guilt of the accused beyond reasonable doubt but in this case, the huge doubt inured to the benefit of the accused since the prosecution was unable to establish that what might have caused the hymen to tear was as a result of sexual intercourse.

Justice Dzakpasu said the lower court erred by not adverting its mind to the evidence given by one of the prosecution's own witnesses, Dr. Samuel Amo-Mensah, which carried weight. He added that the submission of no case filed by the accused could have succeeded if the High Court judge, Charles Quist, had also considered the evidence of Dr. Amu Mensah.

Investigator's Shoddy Job
It indicated that the prosecution knew that the story of the victim could not be the sole truth that was why it invited the doctors to substantiate its claim.

The judge also talked about the shoddy work of the investigator in relation to a plea of alibi by the prophet.

Onetouch stated that the days which his daughter mentioned that he had sex with her were his busy days and therefore he could not have been present at the said time to have sex with her.

According to the judge, even though the investigator had led evidence that the victim was sometimes absent from school on certain days, a fact corroborated by the headmaster of the school, he did not tell the court his findings concerning an investigation he conducted on the accused's schedule when he said he visited his church.

'The plea of alibi is a strong case in which the accused said he was not present when the alleged offence took place. The prosecution needed to have investigated this but interestingly this was not done.'

Also on the issue that Onetouch, amidst tears, begged the victim's mother to drop the case, promising to buy her a house, the judge said that allegation was not well substantiated, observing that it could be an embellishment of facts.

He indicated that the fact that he begged his ex-lover did not necessarily mean admission of guilt and that it could also be for the fact that he feared the disgrace that would be associated with the matter when it hit the public domain.

He therefore disagreed with the conclusion of the prosecution that he cried and begged because he was guilty.

The judge said the law was above common sense and 'it is not subjective but objective'.

The facts of the case are that the victim, who was born out of wedlock, lived with the complainant, Bernice Owiredu Asmaa, until 2005, when she left to leave with the accused person at his McCarthy Hills residence in Accra, to attend school.

K.N. Adomako Acheampong, counsel for Onetouch, said in an interview, 'I am pleased that justice has finally prevailed but I must quickly add that I am worried for the fact that it had to take us all this long period before the court realized that the accused person was not guilty.

Although Prophet Onetouch was not in court when the judge delivered the ruling in his favour, his acquittal was greeted with a lot of happiness from family members and friends including a colleague pastor, Nicholas Osei, popularly known as Prophet Kumchacha.  Family members were seen congratulating each other.

It would be recalled that on Thursday, January 20, 2011, Prophet Onetouch was slapped with a 10-year jail term in hard labour by the Accra Circuit court for defilement and incest after an 11-month trial.

Justice Georgina Mensah-Datsa found him guilty of having sexual intercourse with his 10-year-old daughter but the prophet, who believed he had been framed up, while being escorted to jail still maintained that he did not commit the crime, screaming, 'God should kill me if I defiled my daughter.'

Jesus Onetouch, after serving five months of his jail term, bounced back and filed an appeal challenging the judgment by the Circuit Court on grounds that the judge erred in the judgment because the defense created sufficient doubts in the case of the prosecution which could have led to his acquittal.

Onetouch, the appellant, observed that 'the trial judge convicted and sentenced him without adverting her mind to the evidence given by one of the prosecution's own witness, ACP Dr. Samuel Amo-Mensah, an obstetrician and gynecologist, at the Police Hospital'.

The judge, he also indicated, did not take into consideration the testimony of a police officer stationed at Akropong who was part of the investigating team that built the case docket and also served as an independent witness of the appellant.

These two pieces of evidence, the appellant noted, raised serious doubts in the case of the prosecution.