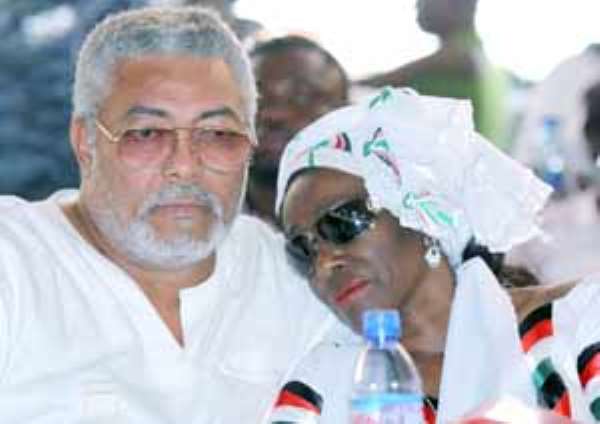 Former President Jerry Rawlings and his wife Nana Konadu, according to reports, have formed a new political party called the National Democratic Party (NDP) and will soon be presenting the party's documents to the Electoral Commission.

The former First Couple are currently out of the country mobilising funds and logistics for the birthing of NDP while there are groups gathering the names and contact details of wards and zonal leaders in various constituencies in the Volta, Central and Ashanti regions, reports say.

Special Aide and Spokesperson for the Rawlinges, Kofi Adams, yesterday confirmed to DAILY GUIDE that Mr. Rawlings and his wife had been under severe pressure from concerned members of the National Democratic Congress (NDC) who were calling for the formation of a new party before the 2012 elections.

'These calls have been coming from our strongholds and all over. I mean the Volta Region, the Northern Region, Brong Ahafo and parts of the Ashanti Region…They say as the NDC stands now, there is nothing happening so President Rawlings should find a vehicle that would turn things round and restore hope to the people,' Mr. Adams noted.

Sources said the calls on the former President to find a new vehicle to restore hope to NDC members were directly linked to the posters of Nana Konadu as well as T-Shirts that had her face embossed on them which popped up across the country periodically.

'I'm not with him when the calls come so I don't know what his response is,' he added.

He also confirmed that both the former President and his wife were out of the country but explained their mission was on something different from mobilising funds for a political party.

On the specific question of whether the Rawlingses were indeed forming a new party, Mr. Adams said he had not been given any such information about the formation of a new party and that he therefore had no knowledge about the NDP.

He however explained that political parties were not formed overnight and that it came with a lot of planning, running around and organising.

Mr. Adams added that: 'Though there are calls from all over, President Rawlings is the founder of the NDC and when you form a community, you do not leave the community and abandon your course simply because a few people are misbehaving. We shall stay and fight it until the right thing is done.'

During the brief moment DAILY GUIDE spent in Mr. Adams's office, his phones got inundated with calls from persons all over the country who had heard of the formation of the NDP and were apparently having orgasms over the report.

Checks from our correspondents in the Ashanti Region showed that talks of the formation of a new party by the Rawlingses had been on people's lips.

Our correspondents said that quite recently, when Nana Konadu toured the region under the guise of 'thanking' the delegates who voted for her during the NDC presidential primaries held at Sunyani, registers were opened in which the names and contact details of NDC members were recorded and it is believed that the register would form the nucleus of the newly formed party.

Michael Teye Nyaunu, the ultra-Rawlings loyalist and MP for Lower Manya Krobo, has pledged his support for any new party formed by the Rawlingeses.

'At any rate if the Former President will form his own party, and so what? People like Teye Nyaunu and the rest will support him; if he so wishes,' Teye Nyanu told XFM in Accra yesterday.

The MP, who has already declared his intention to contest the seat as in independent candidate, though the NDC which he belongs to is fielding a new candidate, however added that there was something mischievous about the reports of the formation of a new party by the Rawlingses.

'Is that the way we form a political party? Do you form a new political party in your bedroom?… It is not true, it is this Ben Ephson and Bature who have been given some money and they are talking the way they are talking. All efforts are consciously being made to discredit Rawlings; so they are determined to go any length to do that,' Mr. Teye Nyaunu alleged during his interview with XFM yesterday.