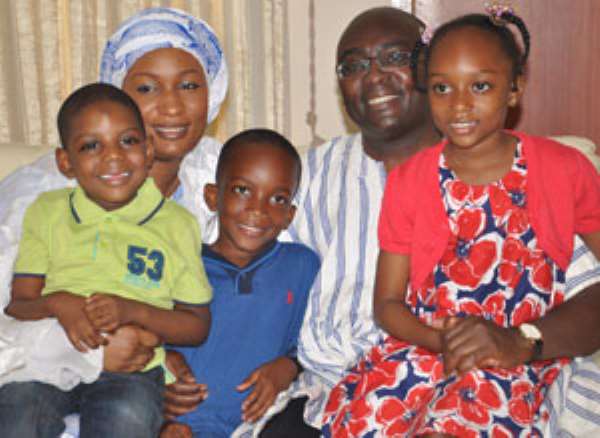 The opposition New Patriotic Party (NPP) gave the strongest indication of its preparedness to take over the affairs of the country when it named its Vice Presidential Candidate yesterday with a unanimous decision ahead of the 2012 polls.

This was when the presidential candidate of the party, Nana Addo Dankwa-Akufo Addo, brought to an end months of speculation and jockeying over who partners him for the 2012 general elections when he named Dr Mahamudu Bawumia as his running mate for the second time.

The nomination of Dr Bawumia, a former Deputy Governor of the Bank of Ghana (BoG), was accepted unanimously by the National Council, the highest decision-making body after congress, when his name was put up by the flagbearer at the party's Asylum Down headquarters at its meeting yesterday.

Party sources said the massive applause that greeted the announcement amply demonstrated the unity with which he was accepted.

Key among those present at the meeting were former President John Agyekum Kufuor and his Vice Alhaji Aliu Mahama, former Chief of Staff Kwadwo Okyere Mpiani, as well as the venerable J.H. Mensah and other influential members of the party who constitute the National Council.

President Kufuor was said to have described Bawumia as a man with the requisite expertise to help manage the economy and create jobs for the youth.

Supporters of Dr Bawumia went haywire when news broke at the meeting that he had been chosen.

There was spontaneous jubilation amidst the popping of Champagne and revving of motorbikes in celebration.

Even before the announcement, Dr Bawumia had been highly tipped among his peers as the likely person to partner Nana.

Party Chairman Jake Obestebi-Lamptey told journalists after the meeting, 'Dr Bawumia is the choice of the flagbearer; he is the flagbearer's choice, he was supported by unanimous acclamation. Not a voice spoke against the choice.'

'More importantly is that the greatest problem facing this country is the management of the economy and using the economy to create jobs that our young people need and the flagbearer was supported by the National Council that in that exercise; should he be elected President, Dr Bawumia was an excellent choice to help him in helping to expand the economy that would create more jobs that would absorb our young people,' he said.

He expressed optimism that the NPP would be given the mandate in December 2012 to restore hope in Ghanaians by creating more jobs.

Nana Addo was said to have paid a glowing tribute to individuals whose names were recommended to him for consideration.

The party's constitution provides for the flagbearer to choose the running mate in consultation with the National Council.

Dr Bawumia has since thanked Nana Addo, the National Council, and the rank and file of the party for the confidence reposed in him.

'I know that this is a sacred responsibility that has been entrusted upon me and I accept the challenge in all humility and I hope to be able to rise up to that challenge with the blessings of Allah,' he stated, noting, 'I know that this nomination is one that people have talked about  a lot but I will like to say that this nomination is not about me personally; it is about the future of this country, it is about the youth of this  country, it is about how we are going to transform this country'.

For this reason, he indicated, 'my nomination would be meaningless unless it is linked to the total economic transformation of Ghana'.

'So we are looking at how we are going to take the opportunity that this will present to us that we will present ourselves to the people of Ghana to ask for their mandate; to be able to make Ghana the manufacturing hub of West Africa to create jobs, to bridge the gap between the north and the south to improve the welfare of our disenfranchised inner cities like the Zongos, Nimas, Chorkors of our country,' he noted.

As he did in 2008, Dr Bawumia stressed his readiness to partner Nana Addo and the NPP to deliver on his vision of free education, saving the National Health Insurance Scheme (NHIS), employment creation and a host of others for Ghana.