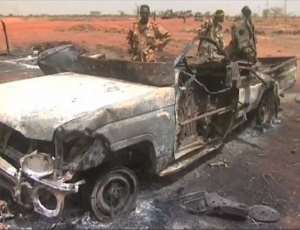 KHARTOUM (AFP) - Sudanese troops fought deadly battles with rebel fighters in the strategic village of Talodi, close to the border with the newly independent south, sources on both sides said on Friday.

The clashes came as negotiators were finalising the details of a joint UN, Arab League and African Union plan for aid to the area, where food shortages have sparked global concern.

Hollywood actor George Clooney, who recently visited the war zone, highlighted the issue earlier this month when he and several members of the US Congress were arrested outside the US embassy in Khartoum. They were calling for an end to a Sudanese offensive they fear will cause thousands to starve.

Sudan's military said it repulsed the assault on Talodi by the Sudan People's Liberation Movement-North (SPLM-N), ethnic minority rebels formerly allied with the SPLM which is now the ruling party in the south.

The army spokesman, Sawarmi Khaled Saad, said he did not have immediate casualty figures. The SPLM-N said it killed more than 20 government troops.

"We lost four, and seven wounded" on the rebel side, said SPLM-N spokesman Arnu Ngutulu Lodi.

The figures were impossible to verify.

Lodi said that in fighting which began on Thursday and was continuing on Friday insurgents seized two Sudanese army outposts, Mafloa and Um Dual, which are several kilometres (miles) from Talodi.

"They are on the main logistics road from Talodi," which is near a key junction between South Kordofan state capital Kadugli and the south.

Mafloa has changed hands before during the fighting which began in South Kordofan last June, Lodi added.

Army spokesman Saad said his forces do not maintain a troop presence in either place. "We only have patrols," he said.

Sudan has cited security concerns in placing tight restrictions on the operations of foreign relief agencies in South Kordofan and nearby Blue Nile state, where a similar conflict began late last year.

More than 360,000 people have been driven from their homes or suffered other severe effects from the fighting, according to the United Nations.

United States officials have warned that about 250,000 people could soon go hungry in the region.

Sudan has accused the south of supporting the SPLM-N, a charge denied by the government in Juba.

Talodi is about 50 kilometres (30 miles) from the nearest point of the disputed border with South Sudan.

Northern and southern troops clashed last Monday and Tuesday in the Heglig oil-producing region, more than 100 kilometres (65 miles) southwest of Talodi, in the most serious violence between the two sides since the south's independence.

The African Union is expected to lead crisis talks between senior envoys of the two nations in the Ethiopian capital Addis Ababa, after the Heglig fighting sparked concern around the world and fears of a wider war.