US presses case as World Bank pick is challenged 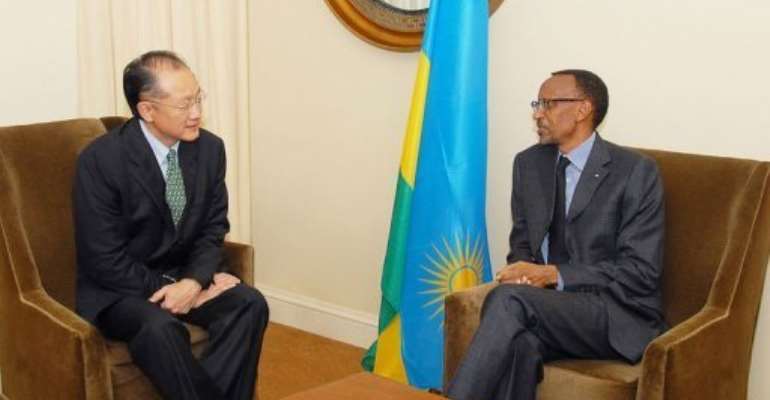 The letter, obtained by AFP, said President Barack Obama picked Kim "because he brings the combination of experience, innovation, and drive that will best serve the Bank in carrying out its critical mission."

Kim, known for his work on HIV/AIDS and tuberculosis, has demonstrated leadership as president of the prestigious university, Dartmouth College and leading large programs at the World Health Organization, Geithner said in a letter dated Wednesday.

The letter was given to the 24 non-American executive directors -- who will choose the next head of the bank -- to distribute to member states.

A nearly seven-decade-long carve-up has seen Americans lead the World Bank and Europeans head the International Monetary Fund, but this year that US hegemony has been challenged for the first time.

Two developing country candidates have thrown their hats in the ring, seeking to reflect the rising contributions of emerging markets to the global economy.

The Nigerian finance minister and a former World Bank managing director warned in a newspaper interview that the choice of the successor of American Robert Zoellick would reveal the truth of rich nations' promises.

"I would really hold the Bretton Woods shareholders to their word, that they want to change the way business is being done and want a merit-based, open and transparent process for the presidency," Okonjo-Iweala told the Financial Times.

"I just want to see whether people just say things with their mouth that they don't mean and what's the level of hypocrisy," she said. "So we want to test that."

Meanwhile Kim met with the deputy chairman of the African Union Commission, Erastus Mwencha, in Addis Ababa Thursday, in the first stop of what the administration has dubbed a "global listening tour."

Kim "solicited the AU's priorities for Africa's economic integration and development" and "discussed how the World Bank can work in partnership with the AU to support these goals," the Treasury Department said.

Kim is scheduled to travel through April 9 to a number of countries that are important players in the Bank: China, Japan, South Korea, India, Brazil and Mexico.

The US nominee is all-but-certain to win the presidency.

With Zoellick, a former US diplomat, stepping down at the end of his five-year term in June, the Bank says it wants to announce his successor by its April 20-22 meetings with the IMF.