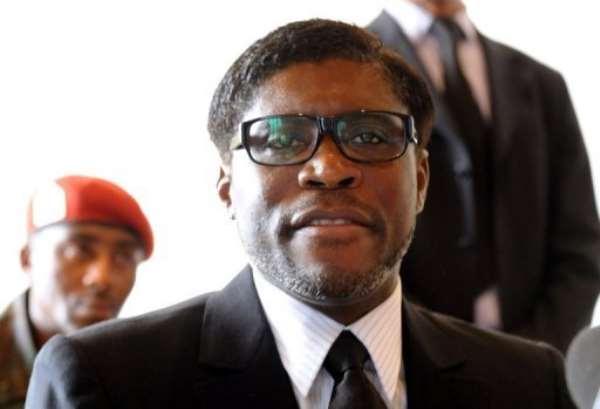 MALABO (AFP) - Equatorial Guinea Thursday warned that French firms would face the consequences if Paris did not scrap an arrest warrant for the son of President Teodoro Obiang Nguema.

A government statement called on Paris to "take immediate steps to halt these destabilising measures," and warned that otherwise "French firms will feel the negative effects from this situation."

Malabo "reserves the right to react reciprocally: if France wants to sever ties with the state of Equatorial Guinea unilaterally, it should manifest this clearly," it said.

According to the French foreign ministry, France was Equatorial Guinea's third exporter and sixth importer in 2010, with bilateral trade topping $600 million.

The statement said Equatorial Guinea was "conscious that French judges, authorities and agents want to spark an internal destabilisation" in the oil-rich nation, stressing that it was "not a former French colony."

The judges have since 2010 been probing the source of money spent in France by Obiang, Congo-Brazzaville's President Denis Sassou Nguesso, and Omar Bongo, the late president of Gabon, in a case dubbed "ill-gotten gains" by the French media.

The charges were brought by Transparency International (TI), an anti-corruption watchdog which alleges the leaders and their relatives spent state funds from their countries on lavish purchases in France.

The ruling Democratic Party of Equatorial Guinea (PDGE) on Wednesday said the country's first son -- also the party's vice president -- could not be judged by a French court.

"French courts are not able to judge a vice president of the PDGE and minister of state for agriculture, nor can they arrest him on grounds invented by a French non-governmental organisation," party official Lucas Nguema Esono Mbang told national radio.

"We don't need to look for problems where none exists. Equatorial Guinea is a country where peace reigns and many of its enemies don't like it," he added.

Obiang's son is agriculture minister -- granting him an official salary of 3,200 euros ($4,200) -- and deputy head of mission to Paris-based UNESCO, which gives him diplomatic immunity.

He is widely perceived as being groomed to succeed his father.

In September last year, 11 of the family's luxury cars were seized in Paris as part of the probe. Police in February searched an Obiang residence in an upmarket Paris district, removing vanloads of possessions.

Obiang has ruled Equatorial Guinea with an iron grip since seizing power in a 1979 coup d'etat, making him the continent's longest-serving head of state.

His country is sub-Saharan Africa's third biggest oil exporter but its people live in grinding poverty.