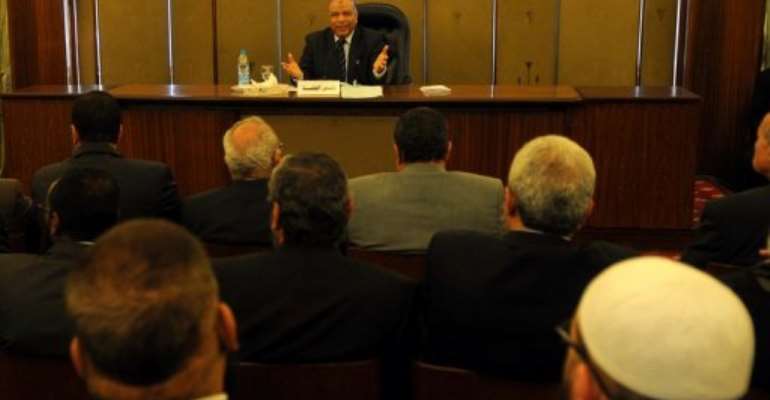 The panel elected the Islamist speaker of parliament Saad al-Katatni as its head on Wednesday. By Mohammed Hossam (AFP)

CAIRO (AFP) - Al-Azhar, Sunni Islam's highest authority, said on Thursday it was withdrawing from a disputed panel dominated by the Muslim Brotherhood to draft a new constitution, following the example of liberals.

Al-Azhar said in a statement that it was under-represented in the constituent assembly which the Islamist-majority parliament appointed to draft the new charter.

"Al-Azhar announces that it will not participate in the panel," it said in a statement, because it was "not appropriately represented."

The Coptic Christian Church, which has only a handful of representatives in the panel, is also considering pulling out, according to press reports.

The constitution is to replace the one suspended by the military when it took power following president Hosni Mubarak's overthrow last year in a popular uprising.

Members of the panel elected the Islamist speaker of parliament Saad al-Katatni as its head on Wednesday, intensifying a standoff with secularists over the nature of the charter.

Katatni belongs to the Muslim Brotherhood's political arm, the Freedom and Justice Party, which dominated parliamentary elections after Mubarak's ouster.

His appointment came after liberal, leftist and independent parties and figures angrily withdrew from the committee, accusing Islamists of monopolising the process.

The constituent assembly's legitimacy was further called into question after Egypt's Supreme Constitutional Court announced it was withdrawing its representative from the panel earlier on Wednesday.

The crisis comes at a critical time in Egypt's transition, with the first presidential elections since Mubarak's fall less than two months away.

The revolt paved the way for the formation of dozens of political groups and movements of all political stripes, but it is the Islamists -- the most organised and with a wide network of supporters -- who have gained the most.

The Muslim Brotherhood and ultra-conservative Salafist Al-Nur party together went on to dominate both houses of parliament in parliamentary elections, sparking fears among secularists and the Coptic minority.

Last week, parliament voted for the constituent assembly to be made up of 50 lawmakers from the upper and lower houses of parliament, and 50 public figures.

But secular politicians and activists argued that such a high proportion of legislators gave Islamists too much control of the constitution.