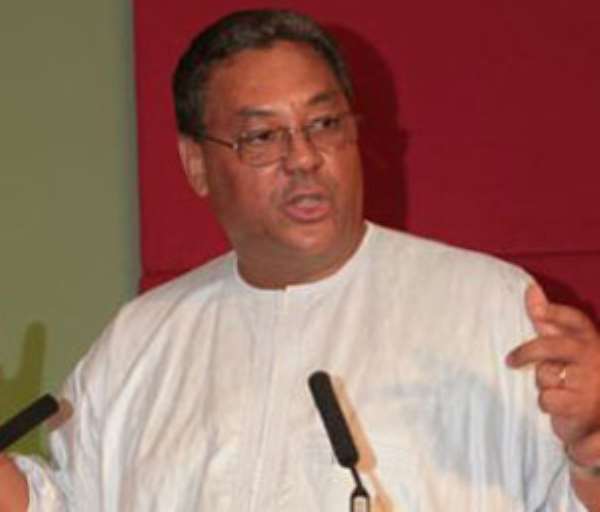 The New Patriotic Party (NPP) has prompted President John Evans Atta Mills to stem the growing incidence of violence and gun-wielding in local politics by dealing ruthlessly with offenders.

'Mr. President, you need to act now, and act ruthlessly to send a clear message to everyone that neither you nor Ghana will tolerate the introduction of guns into our politics,' Jake Otanka Obetsebi-Lamptey, NPP National Chairman, said in an open letter to the president dated March 27, 2012.

It is the first official response to the many cases of violence to rock the ongoing biometric registration exercise and the bloody incident at Odododiodioo constituency in which NPP supporters allegedly sustained injuries at the hands of their NDC counterparts.

Mr. Obetsebi-Lamptey demanded that the president make good his promise of ensuring a peaceful election, a pledge he has incessantly made to the international community and Ghanaians.

Jake demanded especially that the president censure Nii Lante Vanderpuye, his special aide and the NDC  parliamentary candidate for the Odododiodoo constituency, for his recurring acts of hooliganism and vandalism even before the commencement of the biometric registration exercise and currently.

Taking exception to Nii Lante Vanderpuye's recorded remarks that those who attacked NPP members when they were holding a meeting at Zongo Lane in the Odododiodioo constituency were from his family, Jake asked the president to let the gentleman know that 'a democratic society allows freedom of association and other freedoms'.

Jake was referring to the Monday 19 th March 2012 evening meeting which was disrupted by stone and bottle-hurling NDC activists during which some NPP supporters were injured.

Two persons, Adnan and Nunuu, both of the Office of the President, he recalled, pulled out firearms at the scene captured on video, although they did not pull the triggers.

'Mr. President, we have learnt that procuring guns in this country is not difficult. We have also learnt no one has a monopoly on violence. We have finally also learnt that when not stopped early, violence will escalate,' he warned.

Since the commencement of the biometric registration exercise, he noted, guns were being used in various constituencies, a situation which he demanded that the president act upon immediately, pointing particularly at the deteriorating situation in Offinso North, Offoase, Kokoben and Asunafo South.

'Mr. President, we are obviously starting late in getting this guns' matter under control but better late than never.'

He told the president, 'I am hoping to be convinced that you do not want to go into the history books of Ghana as the president who presided over chaos and the introduction of firearms into our politics.'

The NPP National Chairman asked the President, 'In the name of everything Holy, I beseech you to make an example of bringing the persons who have been flashing guns to book to send a clear message to Ghanaians that on your watch, the elections will be free, fair and peaceful', adding, 'The ball is in your court, will you take action or will you hide behind pious words?'

The whole world, Jake stated, was watching Ghana regarding how she managed the forthcoming polls. 'Now we wait to see if your actions will match your words,' he stated.

The NPP's open missive to the president is coming on the heels of an abrasive statement from his mentor, former President Rawlings, in which he painted a gloomy picture of the country under Prof. Mills.

Mr Rawlings likened Ghana's state to a vehicle being driven speedily towards a bottomless pit, and said the situation required spiritual intervention.