Mahama: The Most 'Corrupt' Vice President of the Fourth Republic. Part II 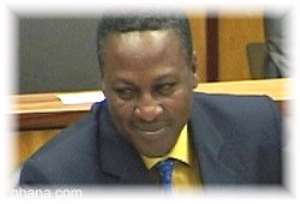 In the 4th Republic, Ghana has had four vice presidents. And there is no doubt that current VP, John Mahama is the most corrupt of them all. Under the PNDC Chairman's first term, the country had K.N Arkaah, a very principled man who would later pay for his principles with his life under the most mysterious of conditions. In the Chairman's second term, he picked the current president, J.E.A.Mills, an unassuming man who was able to keep his hypocrisy and vindictiveness under wraps till the nation voted him into power. (Now we know who he is really is).

President Kufuor would pick Aliu Mahama, a dignified man who would execute his duties with competence and with incorruptibility. With Kufuor's many trips abroad to sell the nation, Aliu Mahama held the fort with flying colors.

But since Mills-Mahama administration, the office of vice presidency has taken a nose dive-not to talk about his boss himself. For the past three and half years, John Mahama has brought such shame to the office, that it is doubtful if any other future VP would break his record. And it does not bode well for the country if, God forbid, he is called to highest office in the “unlikely” event of his boss' failure to complete his tenure. Below are some of John Mahama's handiworks.

HIS DAY OF SHAME. In the latter days of last year, Ghanaian viewers of the most vainful of all TV shows on US cable, “The Housewives of Atlanta” would get the shock of their lives when one of the show's stars, Phaedra Parks, boasted that she had a direct line to our VP. According to Ms. Parks, she had wined and dined with the VP, a married man, when she visited the country. In her own words, she “hobnobbed” with VP Mahama during her stay.

And to back up her assertion, she placed a direct call to the VP from her home in Atlanta.(Think of Afia Schwarzenegger's call to Biden or Clegg) The VP, to the surprise of viewers, would answer the call, put the people's business on the side and would proceed to have a conversation unbecoming of a VP with Ms. Parks. Luckily for Ghanaians, the VP would realize in time that the conversation was being recorded. He thus feigned an excuse and hung up. But by then the harm had already been done. The VP of the bastion of African democracy had embarrassed the country and Africa as a whole. Mahama, would once again confirm what he is historically known for: “Casanovaism”- a man more interested in extracurricular activities than the nation's business.

AMAJARO LTD. After Anas A.Anas had risked his life to go undercover in order to bust cocoa smuggling rings on the Western border, three companies, were subsequently banned from operating in the country. But for some strange reasons, UK's Amajaro LTD, one of the banned companies, were quietly reissued an operating license. The local officers, busted in the undercover operation were led go when the case went to court. The State's excuse was lack of witnesses to help the prosecution's case.

The case would have gone unnoticed had it not been for Amajaro's involvement in a bribery scandal in the UK. According to the Sunday times, an Amajaro's official involved with the bribery case had also wined and dined our VP in a London - the timing of dinner and the lifting of the ban was too much of a coincidence.

To make matters worse, when a few months later , the Mills-Mahama government decided to award the cotton industry contract, guess which company won the contract: Amajaro. And guess who made the made the announcement and cut the sod for project: VP Mahama. Interestingly, the MP cited in the UK's case was reported to have received $100,000 dollars for his campaign. So is it far fetched to assume that "a charity donation" might ....indirectly influenced the oversight committee in reinstating Amajaro's license and the subsequent award of the cotton contract? But Ghana is not England so our VP is walking around scot free-with a heartbeat away from the presidency.

MILLS' ABSENCE.
Anytime President Mills travels abroad, something scandalous happens. Unlike VP Aliu Mahama who ran the country excellently in Kufuor's many absences, things have not been smooth at all in Mills' absence. From the Atiwa bye election violence to the firing of Dr. Frimpong Boateng; from “many ways to kill a cat” to the breaking of the Woyome's scandal – just to mention a few instances- VP Mahama was in charge of the country. Not that things would have been any different had Mills being around. But for a VP and potential president to have presided over such monumental incidents leave a lot to be desired.

At least when Mills was VP, he was able to lie low except when he supervised the cooking of economic numbers resulting in a $20m fine by the IMF-. So with the little that we have seen over the past three years, do citizens think John Mahama has comported himself worthy of his predecessors? Your guess is as good as mine.