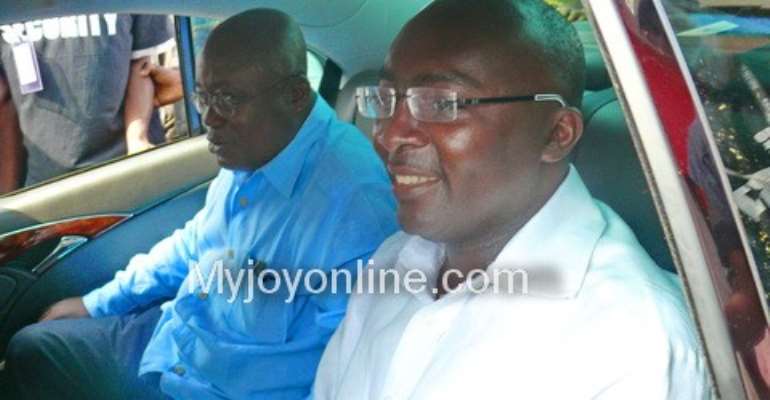 Flag-bearer of the opposition New Patriotic Party, Nana Addo Dankwa Akufo-Addo is calm ahead of Thursday's announcement of his running mate for the 2012 elections, his aide, Mustapha Hamid has said.

Barring any unforeseen circumstances, the NPP's flag-bearer is expected to present his choice of running mate for the 2012 elections to the party's national council for confirmation.

Many party insiders however believe the nomination is a forgone conclusion - predicting he would retain his running mate for the 2008 elections, economist Dr Mahamudu Bawumia.

There are pockets of resistance, however, against his candidature for the slot.

The Party's Director of Communications, Nana Akomea has assured that Thursday's naming would see very little objection, if any, due to the extensive consultation done by the flag-bearer.

Moreover, Mustapha Hamid told Joy News Wednesday that his boss was upbeat about the event.

“He says he is very upbeat, he is very excited and then he looks forward to tomorrow,” Mustapha Hamid recounted.

He would, however, not be drawn into any 'intelligent conjecture' as who would be given the nod when names such as Ambrose Dery, Alhaji MND Jawula and Harruna Alhassan have all cropped up as possible candidates.

Nevertheless, he hinted that in his “wildest guess” Nana Akufo-Addo may go with Dr Mahamudu Bawumia.

Touching on what Dr Bawumia brings to the ticket of the NPP, he said in the 2008 elections, the pair “got a marked improvement in our vote tally in the three northern regions…that ticket improved our fortunes tremendously in the north in 2008”.

He announced that the party would converge at the Police Park in the Northern Region on Friday for a Moslems thanksgiving and to formally outdoor the running mate.

responsibility for putting together the strategy for Ghana accessing the international capital markets with a debut $750 million sovereign bond.

2001-2006 Head, Monetary Policy and Financial Stability Department, Bank of Ghana. Responsible to the analytical work leading to the setting up of the Bank's Monetary Policy Committee (MPC) and oversight for technical work presented to the MPC.

• Leader of Bank of Ghana technical team and part of Government Team that has negotiated with the World Bank and International Monetary Fund since 2001 through HIPC and PRGF.

• Member of Government team to negotiate the Millenium Challlege Account (MCA) compact with the U.S. Government. Was responsible for drafting the financial sector component of the compact.

• Member of Government technical team on the deregulation of the petroleum sector in Ghana.

“African Perspectives on the G20 London and Pittsburg Summits”. Paper prepared for the Economic Commission for Africa. March 2010.

“Africa and the G20 Summit”. Paper prepared for Economic Commission for Africa, March, 2009

“The Choice of Monetary Policy Regime in Ghana”, with Banjamin Amoah and Zakari Mumuni, Bank of Ghana Working Paper, July 2008.

“The Determination of Bank Interest Spreads in Ghana: An Empirical Analysis of Panel Data” with Martin Ofori and Franklin Belnye, Bank of Ghana Working Paper, September, 2005.

“The Determinants of Exchange Rates in Ghana”, with Zakari Mumuni. Bank of Ghana Working Paper. March, 2003

" Why the Apparent Rush to Market Reform"? Journal of Economics, 1999.

2007 Fellow of the Chartered Institute of Bankers, Ghana (FCIB)