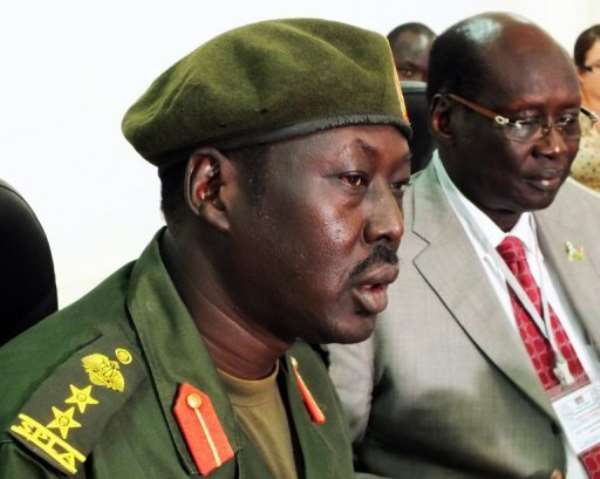 "After a day of attacks by air and ground troops on Monday, this morning we heard the Antonov (aircraft) return, and dropped two bombs," said Gideon Gatpan, information minister for South Sudan's Unity state.

He said he believed the air strikes targeted oil fields but there was no apparent damage.

Sudanese foreign ministry spokesman Al-Obeid Meruh said the bombing was Khartoum's response to an attack launched by the South with heavy weapons on an oil field "inside Sudanese territory."

"What the Sudanese army did is react to the sources of this heavy weapon attack," said Meruh.

The Sudanese army said calm had returned on Tuesday and northern troops were "fully in control of the Heglig area."

South Sudan's Information Minister, Barnaba Marial Benjamin, said his country would not return to fighting Khartoum despite the clashes, and left the door open for next week's summit.

"Our invitation to President Omar al-Bashir still stands as it is," Benjamin told reporters. "We are ready for any dialogue."

But the chief of Sudan's powerful intelligence service, Mohammed Atta, told reporters Tuesday night that after Monday's fighting conditions were not conducive.

"The atmosphere now is not healthy for negotiation," he said.

The agreement gives nationals of each state the right to live, move and carry on economic activities in the other state.

Analysts saw the latest flare-up as an effort to sabotage moves towards warmer bilateral relations.

Magdi El Gizouli, a fellow at the Rift Valley Institute, said it was "highly plausible" that the Sudanese armed forces had launched an attack on a disputed part of the border "with the intention of spoiling this whole rapprochement between north and South Sudan."

He said an Islamist bloc in the Sudanese elite, with considerable support within the armed forces, was strongly opposed to the framework deal.

But there are also elements in South Sudan "who think they can bring down Khartoum," he added.

Another analyst, El Shafie Mohammed El Makki, said that without clear evidence as to who struck first the exact reason for the clash is unclear.

However, the analysts said they did not expect a return to full-scale war.

The UN's refugee agency warned that the bombings put the lives of more than 16,000 Sudanese refugees at risk. It urged the fugitives, who had escaped fighting between rebels and government troops in Sudan's South Kordofan, to move.

Both Heglig and the area bombed on Tuesday are run by the Greater Nile Petroleum Operating Company (GNPOC), a consortium led by China's state oil giant CNPC.

Although both countries claim parts of the Heglig area, Gizouli said it "is firmly in north Sudan".

Sudanese state radio reported early on Tuesday that the government had "suspended Bashir's visit to Juba after the South Sudanese army attacked Heglig."

France on Tuesday called for an immediate end to hostilities.

Foreign Ministry spokesman Bernard Valero said the summit "must be held despite the recent confrontations."

United Nations chief Ban Ki-moon called on both countries to end the clashes and respect the agreements on border security they had already reached, said spokesman Martin Nesirky.

The proposed talks between Bashir and Kiir had been aimed at easing tensions that pushed the two countries to the brink of war as recently as early March.

Border tensions have mounted since South Sudan split from Sudan in July after an overwhelming vote for secession that followed Africa's longest war.

Later in March, after months of failed negotiations, a dispute over oil fees and mutual accusations of backing rebels on each other's territory, South Sudan's chief negotiator Pagan Amum said relations had improved.

Amum and a South Sudanese delegation visited Khartoum last week to invite their "brother" Bashir to the summit and said he had accepted.