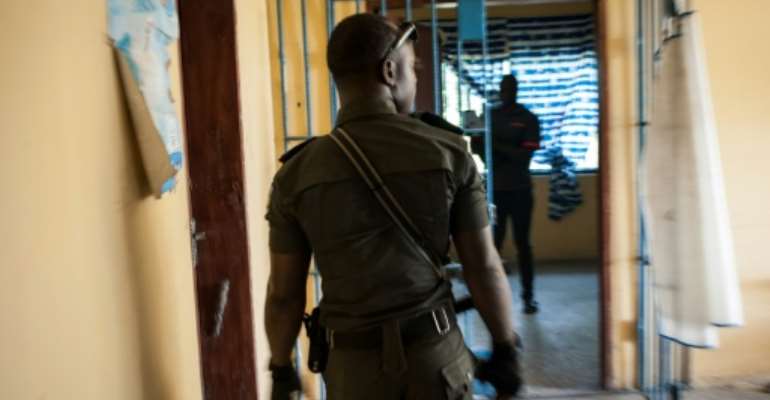 Nigerian police detained seven judges, according to a security source, who said a total of 15 judges were being investigated for allegedly receiving bribes. By Stefan Heunis (AFP/File)

During the nationwide operation which took place on Saturday, police detained seven judges, according to a security source, who said a total of 15 judges were being investigated for allegedly receiving bribes.

The raids prompted the Nigerian Bar Association to declare a state of emergency, denouncing the "Gestapo-style" operation and prompting President Muhammadu Buhari's spokesman to defend the operation.

In a statement, the Department of State Services (DSS) said it had seized $800,000 (715,000 euros) in cash during the operation which was launched on the basis of "allegations of corruption and professional misconduct" by a number of judges.

"The searches have uncovered huge raw cash of various denominations, local and foreign currencies, with real estate worth several millions of naira and documents affirming unholy acts by these judges," it said.

A source at DSS headquarters told AFP "about four or five judges are here with us writing statements".

President Muhammadu Buhari was elected last year on an anti-corruption platform, vowing to stamp out the endemic graft that plagues the oil-rich country.

But critics have accused the former military ruler of using his anti-graft crackdown to silence political opponents and crush dissent.

Bar Association head Abubakar Mahmoud lashed out at Buhari over the raids.

"We are not under military rule and we cannot accept this unholy event and Gestapo-style operation," he told reporters.

A human rights and anti-corruption group urged Buhari to ensure the judges' "immediate and unconditional release".

"We are seriously concerned about the wave of arrests, intimidation and harassment of judges across the country by the DSS," said Adetokunbo Mumuni, chief of the Socio-Economic Rights and Accountability Project.

"We cannot accept anti-corruption strategies and methods which patently offend the rule of law and undermine the authority, integrity, sanctity and independence of the judiciary."

In response, Buhari's spokesman Garba Shehu issued a statement late Sunday saying the president "remains a committed democrat, in words and in his actions, and will not take any action in violation of the constitution.

"The presidency has received assurances from the DSS that all due processes of the law, including the possession of search and arrest warrants were obtained before the searches."

The DSS said it was preparing criminal cases against the judges.