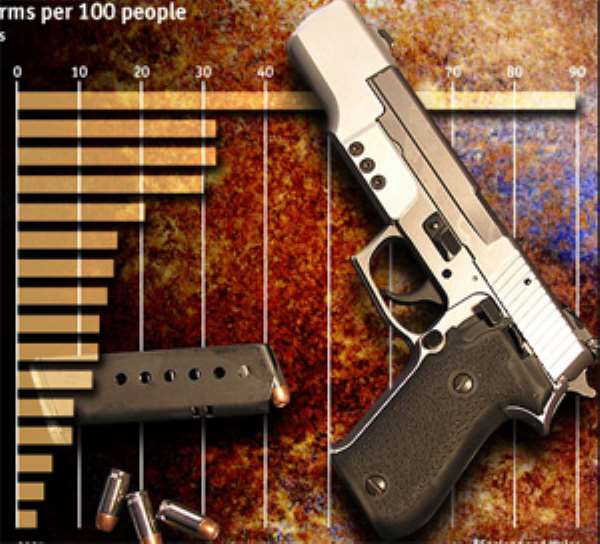 THE MANHYIA Police in Kumasi are expected to process a National Democratic Congress (NDC) agent for court today for shooting a 12-year-old boy during the biometric voter registration exercise on Saturday.

Justice Opoku stunned onlookers including Electoral Commission (EC) officials and potential voters in a queue to register when he allegedly pulled a pistol and shot through the people to restore normalcy after a scene of confusion at the registration centre at the Foase Kokoben Electoral Area in the Bekwai constituency.

The Bekwai Police had been in charge of the nagging issue since Saturday until news broke on Monday morning that the matter had been transferred to the Manhyia Police.

The reasons resulting in the matter being transferred from Bekwai to Manhyia in Kumasi could not be readily ascertained by DAILY GUIDE .

But sources alleged that the transfer was due to security reasons.

The innocent boy (name withheld), who was standing far from where the registration exercise was going on, was hit in the right thigh by the stray bullet fired by the NDC agent, sources disclosed.

The boy was rushed to hospital by Good Samaritans.

The boy survived the shot and he is reported to be in a stable condition at the Kwame Nkrumah University of Science and Technology (KNUST) Hospital.

The firing of the gun sent shivers down the spine of the EC officials at the registration centre, DAILY GUIDE gathered.

The EC staff and others at the centre had to dive for cover.

The episode disrupted the registration exercise in the area as the EC staff were gripped with fear, called off the day's work and went home.

Opoku, reportedly after the unpleasant incident, headed straight to the police station to report the matter to the Bekwai Police who afterwards detained him to assist in investigations.

MP Blames Mills For Violence
The NPP Member of Parliament for Manhyia, Dr. Mathew Opoku Prempeh, has blamed President Atta Mills for the bloody incidents that had characterized the biometric registration exercise across the country.

Dr Prempeh, who sounded concerned about the pockets of violence that had taken place nationwide since Saturday, alleged that all the confusion and attacks that had characterized the national exercise so far had been engineered by the ruling party's activists. He alleged that the president seemed happy about what was going on that was why he had said nothing about it.

Dr. Prempeh said the NDC administration was setting Ghana on the path of destruction, citing incidents whereby NDC activists had fomented trouble at Sankore, Offinso and Foase Kokoben to buttress his claim.

On the Foase Kokoben incident, he said information reaching him indicated that two NDC activists including one still with the party and one defector fought a few metres away from where the registration was going on.

During the scuffle, he said, the NDC member pulled a gun and fired injuring the small boy.

He said the NPP had information about NDC's planned attacks on members of the NPP a long time before the registration exercise began.