Cisse on target for Newcastle 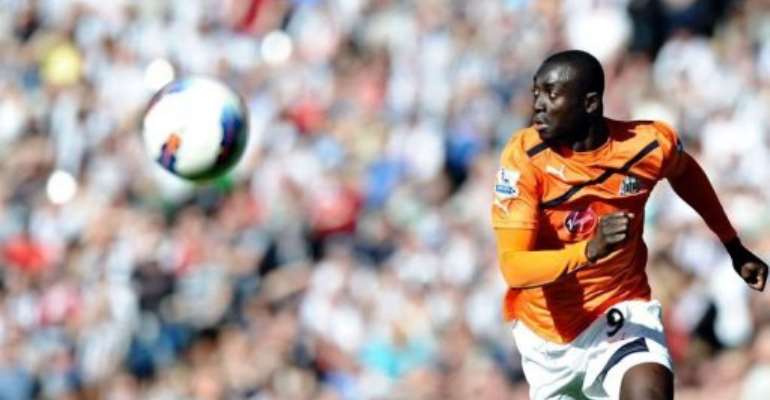 PARIS (AFP) - Senegalese striker Papiss Demba Cisse scored twice at the weekend as Newcastle United stayed in the hunt for a Champions League place with a 3-1 triumph at West Bromwich Albion.

Mid-season signing Cisse scored the first and third goals at the Hawthorns and set up Hatem Ben Arfa for the other to leave the Magpies five points behind fourth-place Tottenham Hotspur with eight rounds of Premier League action left.

Ivory Coast midfielder and reigning African Footballer of the Year Yaya Toure salvaged a draw for title contenders Manchester City by equalising 14 minutes from time in a 1-1 draw at Stoke City.

The Senegal striker scored two and set up another as Newcastle beat West Brom 3-1. First he turned in Hatem Ben Arfa's sixth-minute cross before, six minutes later, supplying the final pass to Ben Arfa for the Magpies second. He then made it 3-0 in the 34th minute to finish off another swift Magpies' counter-attack with a left-foot strike as he made it five goals in six games for Newcastle and three in his last two.

Valuable to a Newcastle side still hunting a Champions League place if only for helping compatriot Cisse settle in on Tyneside. He remains a powerful force up front himself and played a part in the build-up to his fellow striker's second goal at West Brom.

The Ivory coast midfielder rescued what could yet be a valuable point for City in their quest for the Premier League title when, 14 minutes from time, his long-range strike took a deflection into the net to force a 1-1 draw at Stoke.

The Nigeria striker endured a frustrating afternoon in a 2-1 defeat at local rivals Bolton -- the hosts' first match since Fabrice Muamba collapsed with a cardiac arrest in the FA Cup quarter-final against Tottenham. Went close to a goal with a header towards end of first half.

Ghana international Ayew ended a Ligue 1 goal drought stretching back to December 2 as Marseille snapped a run of seven straight defeats with a 1-1 draw at local rivals Nice. Ayew broke the deadlock in the 56th minute, sweeping home Cesar Azpilicueta's cut-back with his weaker right foot, only for Fabian Monzon to earn the hosts a share of the spoils with a 76th-minute penalty.

Malian midfielder Traore claimed the only goal as Nancy won 1-0 at Brest to move five points clear of the relegation zone. The 27-year-old struck in the 18th minute, rapping a crisp, first-time shot into the bottom-left corner from 20 yards to register his first league goal of the campaign.

Ivorian striker Kone registered his third goal since his January move from Slovak outfit Spartak Trnava to set Dijon on their way to a 2-0 win over relegation rivals Caen. Kone made the breakthrough in the 21st minute at Stade Gaston Gerard, diverting a wayward shot from team-mate Samuel Souprayen past Caen goalkeeper Alexis Thebaux from close range.

The Democratic Republic of Congo midfielder scored his second goal in two games as he captained Freiburg to a 2-0 win over German league bottom side Kaiserslautern, which lifted them up to 13th in the table but still only two points from the relegation zone. Slovak Karim Guede put his side ahead after eight minutes and 28-year-old Makiadi added the second with a header on 14 minutes to cap a battling display.

The Ivory Coast striker hit a spectacular bicycle kick against Bayern Munich, but his 74th-minute effort was no more than a consolation in Hanover's 2-1 defeat at the Allianz Arena. Hanover, who face Atletico Madrid in the first leg of their Europa League quarter-final on Thursday, could have saved a point at Munich as ex-Manchester United striker Mame Diouf headed over late on.

The Ghana midfielder made his eagerly anticipated return to first-team action just in time to play a part in Wednesday's Champions League quarter-final against Barcelona. Boateng was an early second-half substitute in Milan's 2-1 in over Roma and showed his typical energy and determination, getting forward into dangerous positions and proving he is never shy to take aim and fire from distance.

The Ghana midfielder had a busy evening with AC Milan and played a crucial role in their 2-1 win over Roma. Muntari's long ball from his own half sent Zlatan Ibrahimovic away to score the winner seven minutes from time. The former Inter Milan player had earlier come close to scoring himself when he took advantage of hesitancy in the Roma defence to unleash a volley that goalkeeper Maarten Stekelenburg tipped onto the bar.

The Ghana midfielder got forward well during his team's 1-1 draw at Palermo and was involved in several scoring opportunities. However, his finishing let him down as he was twice wildly off target when teed up by Pablo Armero and Antonio Di Natale.

Senegalese rookie Mendy made only his fifth start for Sporting Gijon in the northern derby with Athletic Bilbao. The game ended 1-1 and Mendy was substituted on 56 minutes after an encouraging performance, but his team remains in La Liga relegation trouble.

Ivorian Kone played as the lone forward in Levante's 2-0 defeat at home to Osasuna. Kone has 10 league goals this season as his unfashionable side battle for an unlikely Champions League place. Levante currently lie fifth, three points behind Malaga and Valencia.

Cameroon goalkeeper Kameni came off the bench to face former club Espanyol and make his first appearance for Malaga since his move in the New Year. Kameni was called to replace Willy Caballero in the 32nd minute and remained unbeaten as Malaga came from a goal down to win 2-1 and move into fourth position.