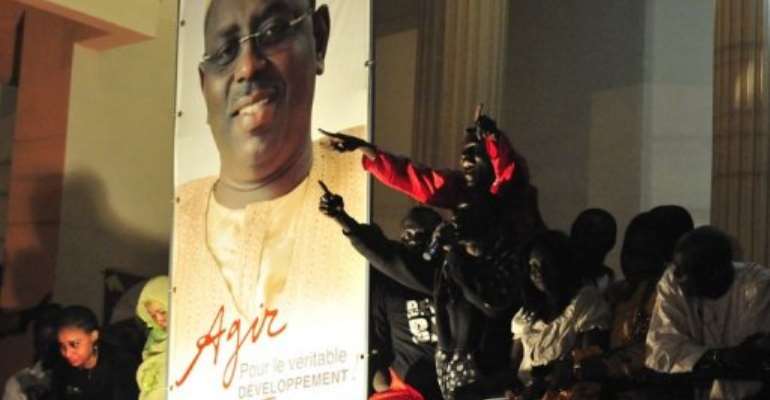 Senegal was jubilant over its change of leadership. By Issouf Sanogo (AFP)

DAKAR (AFP) - Senegal's Macky Sall on Monday hailed a new era after triumphing over veteran leader Abdoulaye Wade in a presidential election lauded as an example for African democracy.

Senegal was jubilant after an election that brought Wade's increasingly controversial rule to a crushing end and disproved fears that political chaos was on the way in a country regarded as a regional beacon of democracy.

"Tonight a new era begins for Senegal," Sall said in the early hours of the morning after his victory became clear following Sunday's run-off presidential vote, prompting thousands to spill into the streets in celebration.

Excitement was palpable in the capital Dakar Monday morning as Senegalese woke up to the news that Wade had gracefully accepted defeat, scotching fears that the 85-year-old would try to cling on to power.

People smiled and congratulated each other on street corners for a show of democracy hailed by former colonial power France as "very good news for Africa in general and for Senegal in particular."

The African Union also praised the "maturity" of Senegal's democracy after an all-too-rare case on the continent of a hotly-contested election playing out smoothly.

"The real winner remains the Senegalese people," the 50-year-old Sall, a former prime minister who was once Wade's protege before falling out of favour, said in his victory speech.

"I will be the president of all Senegalese."

The country's press agreed, saying the victory was one for the people and for democracy.

"Goodbye Wade" headlined Le Quotidien newspaper, praising the incumbent's "honourable" exit over his phonecall to the country's new president just three and a half hours after polls closed to congratulate him.

"Wade's defeat ... has transformed into a victory for the people and Senegalese democracy," read the newspaper's editorial.

However the newspaper was scornful of the octogenarian's final months, in which he defiantly pushed for a third term in office, sparking deadly riots and putting in doubt the status of one of Africa's pioneer democracies.

Wade ended his reign believing "we were resigned under the splendour of his unparalleled genius, but yesterday he stepped down from his divine mountain."

Hugely popular in the beginning of his 12-year rule in 2000, Wade distanced himself from the population amid nepotism, public finance scandals, rising food prices and power cuts while he focused on fanciful legacy projects.

Le Sud also declared "Senegal won again", saying the whole world had had its eyes on Senegal "fearing the cycle of violence Africa so often offers up in political jousting."

Even before Wade threw in the towel on Sunday night, after a peaceful day of voting, thousands of people spilled into the streets, chanting, dancing and sounding car horns.

The celebrations were in stark contrast to the riots which rocked the capital's streets for four weeks in the run-up to the first-round February 26 vote as the opposition protested Wade's candidacy for a third term.

Having served his constitutional two terms, Wade got the backing of the country's highest court to uphold his argument that since the law was not retroactive, constitutional changes in 2008 meant he could run again.

The unrest claimed six lives in Senegal, hailed as one of west Africa's success stories and the only country in the region never to have suffered a military coup.

As Wade defiantly pushed for a third term in office in the face of fierce internal and international criticism, many expected the worst after the second-round vote.

However following in the footsteps of his predecessor Abdou Diouf who bowed out gracefully in 2000, Wade called Sall to congratulate him.

"My dear compatriots, at the end of the second round of the vote... the current results indicate that Macky Sall has won victory," Wade said in a statement.

French President Nicolas Sarkozy described the former French colony as a "model of democracy" and the European Union described the election as a "great victory for democracy in Senegal". Media hailed it as a victory for the people.

In an interview with AFP this month, Sall said that if elected, "several emergencies" loomed.

They included a "dramatic public finance situation" as well as a food crisis in the north where some 800,000 Senegalese are going hungry due to a drought gripping the Sahel region.

Sall said he also wanted to halve the size of the government -- slashing the cabinet by some 20 ministers -- and reduce Senegal's diplomatic representation abroad.

He would use the savings to lower the prices of basic goods, he said.